Vegan Cauliflower Soup is one of our favourite healthy soups to enjoy during the cold Fall and Winter months.

Our homemade roasted Vegan Cream of Cauliflower Soup recipe is quick and easy to make, ready to serve in under 1 hour!

Where To Eat Vegan Cauliflower Soup

If you’re looking to sample vegetarian soups try slurping through the menus at vegan restaurants like Fresh Restaurant, Rosalinda, The Hogtown Vegan, Doomie’s and Planta.

Onions, garlic and cauliflower are available in abundance year round in Canada but we especially love to serve this savoury soup in the Fall at Thanksgiving.

This roasted cauliflower soup was an instant hit thanks to its healthy and flavourful vegan ingredients.

Our roasted cauliflower soup is vegetarian and vegan friendly.

We use vegetable stock for the broth, olive oil to roast the cauliflower and coconut milk to add a creamy and rich texture.

A rich source of phytochemicals and vitamin C, lemons help boost your immune system and neutralize free radicals that cause disease and skin aging. Lemons also protect against heart disease and help improve blood flow to the brain.

This healthy vegan soup recipe is quick and easy to make at home. We’ve included a few tips for first time soup makers!

What To Serve with Vegan Cauliflower Soup 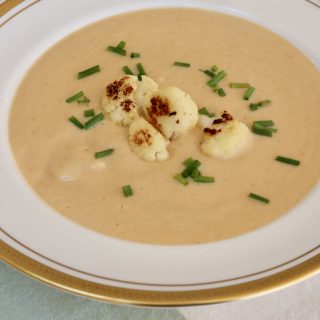