Our Lebanese Lentil Soup recipe is one of our favourite healthy soups to enjoy during Fall and Winter.

Also known as Adas Bil Hamod, our Lebanese Lentil Soup recipe is quick and easy to make, ready to serve in under an hour.

For over ten years, I’ve been on the hunt for the best Lebanese Lentil Soup recipe via adventures that had me zig-zagging through Morocco, Turkey, Egypt, Jordan, Israel and Dubai. You guessed it! Some of my fondest food memories while traveling in the Middle East feature Adas Bil Hamod spritzed with fresh lemon.

I ate Lebanese Lentil Soup with flat bread at a traditional Moroccan riad, as a side dish with Turkish kebab in Istanbul and Bodrum, accompanied by kofta on a Nile Cruise and in bustling market in Cairo, late night fried soup feast in Amman, mid-afternoon slurp at bustling markets in Tel Aviv and Jerusalem and a massive Middle Eastern barbecue in the middle of the Dubai desert while belly dancers twirled under the night sky.

If you live in a large city in Canada or America you’ll likely have access to a local Middle Eastern restaurant that serves a traditional Lebanese Lentil Soup.

Haven’t traveled to the Middle East before? It may be helpful to first sample Adas Bil Hamod at a local restaurant to better understand how the soup is served. You’ll get an idea for the desired chopped vegetables and spice level. You’ll also find inspiration on what to pair with Adas Bil Hamod such as such as fresh salads and flatbread.

Adas Bil Hamod is Lebanon’s national soup, packed full of fresh vegetables and lentils. The soup is slightly sour thanks to the addition of fresh lemon juice before serving. The spiced soup features fragrant flavours thanks to fried garlic, fresh cilantro, cumin and cinnamon.

Potatoes, lentils and spinach are available in abundance year round in Canada but we especially love to serve this savoury soup during Thanksgiving and the chilly winter season.

All types of lentils are rich in cholesterol-lowering fibre. They are also a low-fat source of iron, vital for the cardiovascular system and for energy, and contain B vitamins that protect against heart disease.

A rich source of phytochemicals and vitamin C, lemons help boost your immune system and neutralize free radicals that cause disease and skin aging. Lemons also protect against heart disease and help improve blood flow to the brain.

A rich source of blood-building iron, cumin may also help balance your blood sugar levels and reduce bad cholesterol. It is also traditionally used as a digestive aid.

What To Serve with Our Adas Bil Hamod Recipe

If you have leftover Lebanese Lentil Soup you can store it in the fridge in an airtight container for up to a week. To reheat simply zap it in the microwave or simmer in a small saucepan on the stove. 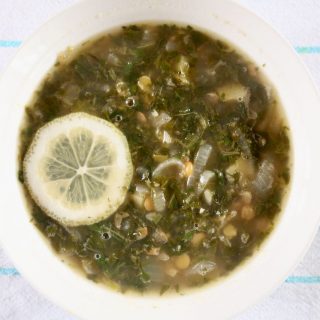