In just under one hour, prepare this healthy snack on your stove then bake it in the oven for a nutritious, crowd-pleasing keto appetizer.

Enjoy Keto Jalapeno Poppers as a game day snack, at a summer barbecue or as an appetizer when you’re hosting a spicy Mexican feast.

What is the Keto Diet?

The ketogenic diet (or keto diet, for short) is a low-carb, high-fat diet that offers many health benefits. Over 20 studies show that this type of diet can help you lose weight and improve your health.

A keto diet involves reducing carbohydrate intake and replacing it with fat. This reduction in carbs puts your body into a metabolic state called ketosis. When this happens, your body becomes efficient at burning fat for energy. It also turns fat into ketones in the liver, which can supply energy for the brain.

Ketogenic diets can cause significant reductions in blood sugar and insulin levels. This, along with the increased ketones, has numerous health benefits.

Looking for a Keto friendly appetizer? Our Keto Jalapeno Poppers recipe is carbohydrate free and pairs nicely with other low carb dishes such as Keto Brussels Sprouts and Keto Artichoke Spinach Dip.

What Are Jalapeno Poppers?

Traditional Jalapeno Poppers are a jalapeno peppers that have been hollowed out, stuffed with a mixture of cheese, spices and sometimes meat, breaded and deep fried.

They’re sometimes called an armadillo egg, especially if wrapped in bacon or sausage meat to give the appearance of an armadillo shell.

The term has been used since 1972 in Texas. As chile relleno can be made with jalapeño, the jalapeño popper is considered a Tex-Mex version of the traditional Mexican dish. The name Armadillo Eggs comes from the dishes perceived similarity to Scotch eggs. When smoked or grilled and stuffed with sausage, they are also referred to as A.B.T or Atomic Buffalo Turds.

Our healthy Keto Jalapeno Poppers significantly reduce the calories and fat of a typical recipe by baking instead of deep frying. The filling for most Jalapeno Popper recipes is usually prepared with cheese and bacon or sausage. We’ve also added sautéed mushrooms to bulk up the filling.

Our low carb Jalapeno Poppers are gluten free as the peppers are not breaded and deep fried. You’ll still experience an enjoyable crunch as the exterior of the peppers are firm, filled with bubbling and spicy creamy cheese.

My family loves Jalapeno peppers so much that we make our own Fermented Jalapeno Peppers each Fall to enjoy year round on cheese and charcuterie boards.

Jalapeno Poppers are typically served at pubs and bars in Canada and America. You’ll often find them listed on a menu beside nachos, chicken wings, sweet potato fries and pierogies.

Jalapeno Poppers served at restaurants are typically deep fried straight from the freezer. Kitchen’s typically purchase the product already prepared from factory’s like McCain, who are also famous for their onion rings and french fries.

You can also purchase Jalapeno Poppers at your local grocery store, cheddar and cream cheese options are the most common. You can deep fry or bake them at home as they are already breaded and pre-cooked.

Jalapeno Poppers at restaurants are often served with salsa, sour cream and guacamole. Guests are encouraged to share a basket of Jalapeno Poppers as they’re a filling snack. They’re best paired with craft beer or tequila cocktails.

My family always loves ordering Jalapeno Poppers when we visit a sports bar or pub so I decided to develop a healthier recipe so we could enjoy them at home more regularly.

Our Keto Jalapeno Poppers allow you to still enjoy the mouth-watering recipe you love, but with significantly less calories and carbs.

I was initially nervous to cook with jalapeno peppers at home as I had heard so many scary stories about people stinging themselves with hot pepper oil.

If you’ve never sliced a jalapeno pepper before don’t fret! You can easily prepare Keto Jalapeno Poppers safely if you follow these steps. When in doubt, clean your hands with soapy water and never touch your eyes with your hands.

Keto Jalapeno Poppers are most commonly served at large gatherings like the Super Bowl, Academy Awards, summer barbecues or birthdays.

Whether you’re serving Keto Jalapeno Poppers at home or preparing them to take to a potluck, it’s easy to make the recipe in advance.

You can easily make the stuffed peppers 24 hours in advance. Once the peppers have been sliced and stuffed with the cheese filling, simply place them on a baking sheet, cover in plastic wrap and store in the fridge until you’re ready to bake.

Depending on how hot your oven is, our Keto Jalapeno Peppers take less than 20 minutes to cook in the oven. We suggest serving them as an appetizer or place them on a platter on your counter if you’re hosting a casual buffet.

We’ve used spicy cured chorizo sausage in this recipe but you could substitute for crispy bacon if that’s what you prefer.

You definitely want to use cream cheese to create a creamy texture but feel free to substitute half with thick Greek yogurt if you’re looking to make an even healthier recipe.

What To Serve with Keto Jalapeno Poppers

Keto Jalapeno Poppers are a healthy Tex Mex appetizer we like to serve with tacos, fajitas, queso or nachos.

How To Store Baked Jalapeno Poppers

It’s unlikely that you’ll have any leftovers as our favourite spicy appetizer is a guaranteed crowd pleaser.

Seriously, who is going to neglect a lonely pepper stuffed with oozing cheese and spicy chorizo on a tray?

If you do have leftovers, store them in an airtight container in the fridge and simply bake them to reheat. We do not suggest reheating using a microwave as the Hickory Sticks will get soggy. A toaster or oven will help crisp up the pepper and topping so they are crunchy.

If you’re like my family, why not double the recipe to ensure you have plenty of Keto Jalapeno Poppers to enjoy throughout the remainder of the week?

Can You Freeze Jalapeno Poppers?

Yes you can! It’s easy to flash freeze our easy Keto Jalapeno Poppers and have them ready for your next cheese craving or impromptu backyard barbecue.

To freeze the jalapeno poppers before baking, simply prepare the stuffed pepper boats, put them on a baking sheet lined with parchment paper and freeze. Make sure the Hickory Sticks are smushed into the cheese filling, so they don’t fall off.

After they have frozen solid, place them in a durable freezer bag and pull them out to have fresh baked keto jalapeño poppers whenever you’re keen for a spicy kick! Once they’ve thawed pop them in the oven when hunger strikes!

Alternatively you can bake them first, saving yourself from having to wait for them to thaw before baking. This is our preferred method as they are ready more instantly since you pre-baked them in advance. 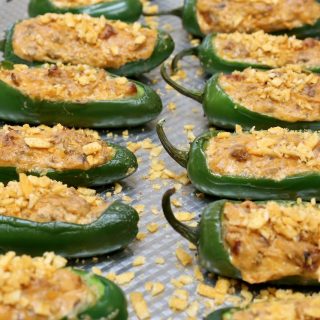