Tartiflette Reblochon is a sublime Swiss winter staple that will impress any fromage loving foodie at the holiday feasting table. Made popular in France’s mountainous Savoie region, the hearty dish is also enjoyed with enthusiasm in neighbouring Switzerland.

Tartiflette is most often associated with apres ski dining culture, the perfect comfort food during winter. After skiing through plumes of powder in Zermatt, locals warm up by indulging in cheesy fondue, raclette and tartiflette reblochon.

What is Tartiflette Reblochon?

Tartiflette Reblochon is made with only a handful of ingredients. Parboiled and sliced potatoes are organized in a gratin dish and layered with a mixture of butter, garlic, onion, bacon, and white wine.

There are two schools of thought on the next step: some chefs top the gratin with rich whipping cream while others slather it with tangy crème fraîche.

The dish is crowned with a sliced round of reblochon cheese before being popped into the oven.  Tartiflette Reblochon is ready to serve once it bubbles and squeaks a golden brown melted cheese!

Last year Chef Munn worked as a private chef in Verbier, Switzerland and was introduced to Tartiflette Reblochon by the properties grounds keeper. “Tartiflette is very popular in winter, as it’s heavy, rich and satisfying. It’s ideally eaten at lunch during a day on the slopes as it offers a massive fuel boost. It’s a cozy and delicious meal that is guaranteed to warm you up. I love to make this dish at home because it reminds me of the great times I had cooking in Switzerland. For anyone who has a love for potato, onion, lardon and cheese, you’re in for a treat,” says Munn.

What is Reblochon Cheese?

Reblochon is a French cow’s milk cheese produced in Haute-Savoie located in east-central France, near Geneva, Switzerland. Reblochon is produced in a farmhouse artisanal style by twenty small factories and 180 farmhouse producers.

The celebrated cheese is made from the milk of the Abondance breed of cow, which also yields Beaufort and Vacherin d’Abondance. The curds are uncooked, lightly pressed and then aged for 4-5 weeks with regular washings of the rind.

Considered one of the world’s greatest mountain cheeses, Reblochon offers a smooth and creamy paste that to the touch can be both rubbery and sticky. 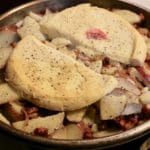 What To Serve with Tartiflette?

Tartiflette is Switzerland’s most decadent dish. Crunchy potatoes can be found smothered in puddles of gooey cheese and cream, and given a kick thanks to cracked pepper and smokey bacon. It’s best treated as an entrée, the star of the show, rather than a side dish. Serve your Tartiflette Reblochon alongside a fresh green salad, glass of dry white wine, and board topped with cured meat, grainy mustard, cocktail onions, gherkins and slices of Gala or Honeycrisp apples. Your guests will ooo and ahh after forking through their first bite of tartiflette. It offers the ultimate satisfaction for those who love potatoes smothered in bacon and cheese.

If you live outside of Europe, getting your hands on a fresh wheel of Reblochon cheese can sometimes be a challenge. Before organizing a Tartiflette Reblochon dinner party it’s best to visit your local cheese shop. Inquire to see if they have Reblochon regularly in stock. If not, find out how much time the owner needs you to call them in advance to place your order. If you’re unable to find a wheel of Roblochon you can substitute for another surface ripened cheese: