Vegetarian French Onion Soup is one of our favourite healthy soups to enjoy during the cold Fall and Winter months.

Our homemade Vegetarian French Onion Soup recipe is quick and easy to make, ready to serve in under 2 hours.

Travel to Europe by Cooking Vegetarian Onion Soup at Home

What I love most about traveling to France is the opportunity to sample unique dishes in each region and city. The dishes in Paris and Versailles are unique to what you might find on restaurant menus in Normandy, Chateauneuf de Pape, Provence, Epernay, Reims, Dijon and Annecy.

Once back home from a French holiday you’ll have a newfound appreciation for the flavours of France and can impress friends and family by making our easy Vegetarian French Onion Soup recipe.

Travel to the cute Swiss town of Gruyere in French-speaking Switzerland and you can sample some of the best French Onion Soup and Grilled Cheese Sandwiches prepared with the town’s world famous cheese. Film buffs also adore the haunting HR Giger Museum, the genius behind the Aliens franchise.

Where To Eat French Onion Soup

Garlic, onions, mushrooms and thyme are available in abundance year round in Canada but we especially love to serve this savoury soup in the Fall at Thanksgiving.

My dad used to make French Onion Soup for my sister and I when we were kids on cold days in the Fall or whenever there was a blizzard in the Winter. There’s nothing like the satisfaction of warming up on a cold day by peeling a bubbling layer of stringy cheese of a floating bread boat while the aroma of caramelized onions wafts through your hair!

You can transform the classic French soup recipe into a vegetarian friendly dish by substituting beef stock with mushroom broth or vegetable broth.

One of the most distinct aspects of an authentic French Onion Soup flavour profile is umami. The Japanese word describes “savouriness” and is one of the five basic tastes.

In a traditional recipe, caramelized onions combine with dry or fortified wine and rich beef stock to provide a salty taste on the tongue. Our easy Vegetarian French Onion Soup recipe also features the desirable umami flavour thanks to the addition of mushroom broth and vegan Worcestershire sauce. You can also add a few drops of soy sauce to liven up the flavours.

We prefer using mushroom stock as it mimics beef broth in that it has a dark appearance and is similarly rich in umami. You can also use vegetable stock if that is what you have available or prefer.

You can buy mushroom stock at most grocery stores or health food stores. Or, if you like tinkering in the kitchen, why not make your own homemade mushroom stock?

Looking to enjoy a Vegan French Onion Soup recipe? You’ll need to substitute butter for olive oil and gruyere cheese for your favourite vegan cheese. Just make sure the vegan cheese product you purchase has melting properties so it oozes and gets stringy like mozzarella or gruyere.

This healthy homemade vegetarian soup is quick and easy to make at home. We’ve included a few tips for first time soup makers!

What To Serve with Vegetarian French Onion Soup

If you have leftover Vegetarian French Onion Soup you can store the soup base in the fridge in an airtight container for up to a week. To reheat simply zap it in the microwave or simmer in a small saucepan on the stove.

Do not store the soup in the fridge or freezer with baguette slices and shredded cheeses. Store the leftover cheese and bread separately in ziplock bags and assemble in bowls and gratin in the oven when ready to eat. 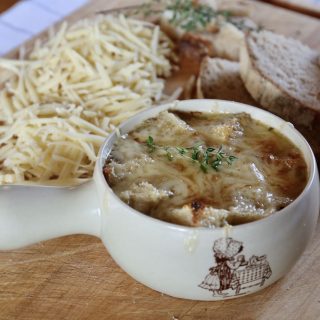