Our easy homemade Green Onion Cake can be prepared from scratch in less than an hour. Our step by step guide shows you how to prepare a simple dough, top with oil and scallions, roll out and gently fry until crispy.

Serve as a savoury appetizer or salty snack with a quick sweet & spicy dipping sauce. Our Chinese Scallion Pancakes are vegan, dairy, egg and nut free.

Chinese Green Onion Cake, also known as Cong You Bing, dates back so long ago that many historians cannot agree on where it was created. Its origins have passed into myth, folklore, and guesswork.

It’s impossible to be certain where it was first created, but many of these tales point to Shanghai in northeastern China. Why is this hypothesis so plausible? Shanghai has a large and diverse population including a large Indian community. The scallion pancake greatly resembles an Indian flatbread known as paratha.

There is also a story in China that suggests pizza is an adaptation of the scallion pancake, brought back to Italy by Marco Polo. However, historical evidence in Europe suggests that pizza was not shared by Marco Polo, but existed in the Mediterranean long before his time.

The first recorded use of the word “pizza” dates from 997 AD, more than 250 years before Marco Polo was born.

What is Chinese Green Onion Cake?

Green Onion Cake is a pancake type of unleavened flatbread that has been folded over several times. It is then fried in oil and mixed with a generous helping of scallions or chives.

Unlike Western pancakes, it is made from dough instead of batter. It is pan-fried which gives it crisp edges yet also a chewy texture. Variations exist on the basic method of preparation that incorporate other flavours and fillings.

Scallion pancakes are served both as a street food item and as a restaurant dish. They are also sold commercially, either fresh or frozen in plastic packages, often in Asian supermarkets.

Most Green Onion Cake recipes feature minced scallion as the main flavour ingredient. You can also substitute green onion for chives or use a mix of both as we have in this recipe. Use whatever is in season, available or cheap!

Other ingredients, such as chopped fennel greens and sesame seeds are sometimes added with the green onions. When using garlic chives, these pancakes are called jiucai bing or jiucai you bing.

In Taiwanese cuisine, egg pancakes are sautéed with egg coated on one side and the dough is thinner and moister. In America and Canada, the pancakes are often served with soy sauce, hot chili sauce, or Vietnamese dipping sauce.

Where To Eat Green Onion Cake

As you might have guessed, Cong You Bing is a popular dish in Asia in destinations like China, Hong Kong, Macau and Taiwan.

If you live in a large city in North America you’ll likely have access to a local Chinese restaurant that serve traditional Scallion Pancakes.

Haven’t traveled to Asia before? It may be helpful to first sample scallion pancakes at a local Chinese restaurant to better understand how the dish is served. You can also assess the thickness of the Green Onion Cake and sample the correct texture before trying to make them at home from scratch.

Ready to cook our homemade Green Onion Cake? We suggest reading the recipe directions in detail to ensure you understand the step by step process.

Before you even start cooking these Chinese pancakes we suggest preparing the dipping sauce and setting it on your dining table. Your place setting should include chop sticks as well as paper towels. If you plan to eat with your hands, your fingers can get a little greasy.

If you are serving a large group, we suggest heating your oven to 250F and keeping the finished Cong You Bing warm on a baking sheet until ready to serve. The total time to make each Green Onion Cake is less than 5 minutes. This recipe makes 6 large sized scallion pancakes.

If you’re hosting a dinner party and expect to double or triple the recipe to feed all your guests, prepare the dough a day or two in advance and simply leave resting in the fridge until you need it.

How To Roll Green Onion Cake

The most difficult part of this recipe is rolling up the green onion-filled dough to ensure when it cooks there are many flakey layers. There are two methods to achieve the desired texture:

What To Serve With Scallion Pancakes

I most like to serve Cong You Bing as a midday snack. You can either enjoy them on their own or dipped in a savoury, sweet or spicy sauce.

I’ve included a recipe for our favourite Green Onion Cake dipping sauce. If you don’t have all the ingredients you can easily substitute for something more simple like soya sauce, hot sauce, plum sauce, Thai sweet chili sauce or Sweet & Sour Sauce.

Hosting a dinner party and have an open concept kitchen where people can socialize? It’s fun to fry up the prepared Green Onion Cakes as people arrive. The smell of oil and green onion greeting each guest will have everyone salivating!

I find that people really like to watch the pancakes transform from a supple dough to a crunchy and crispy cake. Slice each Green Onion Cake in four with a French knife and serve as an hors d’oeuvre that can be passed around the room on a plate or platter.

This recipe is also a great idea for a potluck party. You can fry the Green Onion Cakes at home beforehand and simply reheat them at the hosts house 20 minutes before serving in a 300F oven. 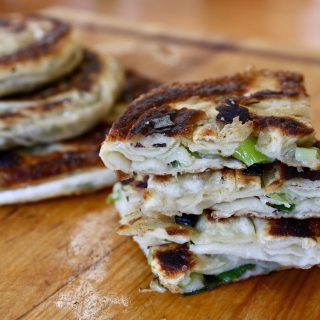