Smorgastarta is a traditional Swedish Sandwich Cake enjoyed year round, especially during special celebrations like Midsommar, birthday parties and weddings.

Authentic Smörgåstårta has eye-popping appeal, sure to impress your guests. After slicing into the savoury sandwich cake they’ll be dazzled by layers of bread and colourful fresh cold salads.

Ever wished upon a star hoping you could eat a slice of cake for dinner? With Sweden’s Smorgastarta, you can!

Smörgåstårta literally translates to “sandwich cake,” but rather than being constructed of sweet sponge cake and buttercream, it’s assembled with layers of bread, and alternating cold salad fillings.

The first recorded reference to Swedish Sandwich Cake was in a Småland newspaper in 1934, and it appears to have grown in popularity after the World War II, possibly due to the free availability of ingredients such as butter and cheese after rationing ended.

In 2012, November 13th was chosen as the official “Smorgastarta Day,” following Swedish’s beloved tradition of giving national foods their own day of celebration. It was popularized by the group Smörgåstårtans Vänner, translating to Friends of the Sandwich Cake.

It is a celebratory savoury cake that is similar to a sandwich, but with large amounts of filling and garnish, similar to a layered cream cake.

Swedish Sandwich Cake is normally made up of several layers of whole wheat or light rye bread with creamy fillings in between. The fillings and toppings vary, but egg and mayonnaise are often the base; additional fillings may include one or more of the following: liver pâté, olives, shrimp, ham, cold cuts, caviar, tomato, cucumber, grapes, lemon slices, cheese, and smoked salmon.

Smorgastarta is served cold and cut like a dessert cake. The types of sandwich cakes vary from meat, fish, combinations of cheeses and meats, to vegetarian or vegan. The garnishes on top often reflect the ingredients hidden inside.

In 2019, traditions and iconography from Swedish folklore were displayed in the much talked about Midsommar film. Dubbed the most haunting horror film of the year, director Ari Aster filmed a terrifying tale of a creepy Swedish Midsommar feast. Sadly, actress Florence Pugh was never given the opportunity to indulge in a slice of Swedish Sandwich Cake. For shame!

Take it from the Swedes, Smorgastarta is a great meal idea for large gatherings in the summer. Rather than preparing hundreds of sandwiches for a summer family picnic, why not construct one dazzling Swedish sandwich cake?

Travel To Sweden by Making Smörgåstårta at Home

I first bought Scandinavian Sandwich Cake in a grocery store in Goteborg. I had never dreamed you could transform the solitary sandwich concept into a more celebratory, shared savoury cake experience. I ate an entire store bought Smörgåstårta, lured by the pretty toppings including cucumber, tomatoes, orange slices, grapes and cold cuts.

Once back home from a Scandinavian holiday you’ll have a newfound appreciation for the flavours of Sweden and can impress friends and family by making your very own homemade Smorgastarta!

After encountering Swedish Sandwich Cake on a visit to Sweden during Midsommar I thought I should introduce the unique sandwich cake to my family back home.

I knew my family would love Smörgåstårta because they love eating sandwiches and sweet cake slices. This popular Swedish dish is perfect for cooks who enjoy delighting their guests with recipes that feature creative food design and edible surprises!

I assembled this Smorgastarta recipe at the cottage in Muskoka on a cool Autumn day. In the morning I cut slices of whole wheat and sourdough bread to make a long rectangular cake. I then prepared the cream cheese frosting, egg salad and German ham salad.

Using a palette knife I assembled each layer of the cake, alternative bread slices and salads, creating serious eye appeal once sliced. The top of the sandiwch cake is garnished with slices of lemon, cucumber. radish, capers and fresh herbs.

I stored the sandwich cake in the fridge and surprised everyone at the table during a lunch, unveiling a multi-layered finger-licking-good masterpiece!

You can assemble a Smorgastarta are two ways.

The best Swedish Sandwich Cakes showcase a colourful and distinct interior, which can be achieve by selecting loaves with contrasting colours. Why not make a cake with dark brown pumpernickel bread and bright white sourdough?

As long as the bread is soft and easy to slice you’ll be just fine. Avoid thick crusted artisanal loaves as they are hard to slice.

Making homemade Smörgåstårta is fun because once you master the assembly and basic recipe you can get creative with your fillings.

Most Swedish Sandwich Cakes always have a layer of egg salad but you can prepare alternative fillings based on the season or your personal taste preferences.

Here are some of the best Swedish Sandwich Cake filling ideas:

When you’re walking down the aisles of a grocery store in Sweden and spot a stack of Swedish Sandwich Cakes in the fridge you’ll notice the garnishes help inform shoppers on what fillings will be found inside.

The garnishes typically reflect the proteins use in each filling and flavours that will pair well.

When To Serve Swedish Sandwich Cake

While Smorgastarta is often served during Midsommar and through the warm summer months, we love serving this savoury sandwich cake year round.

What To Serve With Sandwich Cake

Scandinavian Sandwich Cake is best enjoyed as a slice on its own.

If you’re enjoying the cake for brunch, lunch or dinner, pair a slice with fresh salad or homemade soup. If you’re serving our Swedish Sandwich Cake recipe at a summer barbecue or special celebration like a birthday, it pars nicely with craft beer, fine wine or cocktails.

If you’re feeling truly decadent, pair the sandwich with some of our favourite picnic dips and side dishes like Guasacaca, Keto Spinach Dip, Melitzanosalata Greek Eggplant Dip or Mexican Queso.

Since Swedish Sandwich Cake is made of mayonnaise and sour cream it can easily melt at warm temperatures. As soon as you finish assembling the cake store it in the fridge to keep cool.

You can store leftover Smorgastarta in an airtight container in the fridge for 2-3 days. 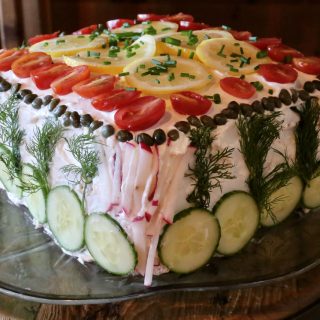