You can prepare our easy cherry cupcakes recipe at home using vanilla or chocolate cake mix and frosting.

Our recipe celebrates the flavour of cherries in three ways: cherry juice moistens the cupcake batter, cherry pie filling is stuffed inside for a sweet surprise and a maraschino cherry is placed on top as a delightful decoration!

The first mention of what is now called a cupcake was in 1796, when a recipe for “a light cake to bake in small cups” was written in American Cookery by Amelia Simmons. The earliest documentation of the term cupcake itself was in Seventy-five Receipts for Pastry, Cakes, and Sweetmeats in 1828 in Eliza Leslie’s Receipts cookbook.

In the early 19th century, there were two different uses for the term cup cake or cupcake. In previous centuries, before muffin tins were widely available, the cakes were often baked in individual pottery cups, ramekins, or molds and took their name from the cups they were baked in.

This is the use of the name that has remained, and the name “cupcake” is now given to any small, round cake that is about the size of a teacup. While English fairy cakes vary in size more than American cupcake, they are traditionally smaller and are rarely topped with icing.

The popular HBO show Sex and the City is credited for acting as a catalyst for the revival of modern day cupcake culture in America and around the world. Ever since Magnolia Bakery was featured in the show it’s become a popular New York City tourist attraction for visiting cupcake lovers.

The financial crisis in the early 2000s also helped with the boom of cupcakes, which were popping up in bakery windows like wild fire across the country. When incomes drastically dropped, cupcakes offered an affordable decadence that could be enjoyed on its own during trying times.

Soon brides and grooms trended towards offering guests a table covered in individual cupcakes instead of one large multi-tiered wedding cake. Since cupcakes are considered a dessert-for-1, serving them at weddings and other large gatherings like Christmas parties and baby showers became the norm. Cupcakes allow hosts to serve more than one flavour at a time, offering guests a selection of lemon blueberry, salted caramel or chocolate cherry cupcakes, to suit every taste.

Simply add a few drops of green food colouring to vanilla frosting and combine until smooth with a wooden spoon. Use a pipping bag to decorate the top of your cherry cupcakes with festive strips of white and green icing. A red maraschino cherry on top adds a touch of holiday red.

Our homemade cupcake recipe celebrates the flavour of cherries in three unique ways.

The recipe for most cake mixes typically require eggs, water and vegetable oil. We’ve substituted the water for tart cherry juice, which contrasts nicely with sweet buttercream icing. Cherry juice is typically dark red, so we suggest using chocolate cake mix so the colour is consistent. You can also use vanilla cake mix to prepare these cupcakes but you might want to use baking cups so the colour of the cupcake crumb is concealed as it’s not as appealing to the eyes.

These cherry filled chocolate cupcakes are also stuffed with pie filling. Fill each cupcake tin half full of cake batter and then spoon 2-3 cherries from a can of prepared cherry pie filling into the centre of each cupcake. Top with remaining batter and ensure the cherries are completely covered and the batter reaches the top of the pan. Don’t overfill your cupcake tins as they will rise in the oven. Guests enjoy pulling open cherry cupcakes to find a surprise stuffed inside!

The last step of this recipe ensures you serve a cupcake with a cute cherry on top. We suggest placing one red Maraschino cherry on the top of each cupcake but you could also place three together in the centre if you don’t want your cupcakes to look like nipples, ha! If you’re preparing cherry cupcakes for Christmas we suggest purchasing a mix of green and red Maraschino cherries to add festive colour to the finished product.

If you’re a big fan of cherry flavour and have cherry extract in your kitchen you could also add a few drops to vanilla frosting. It will add an additional layer of cherry flavour to your cherry chocolate cupcakes recipe.

Our quick and easy cherry cupcakes require very few ingredients and utilize a lot of prepared products you can find in your grocery stores baking aisle. If you’re a “baking from scratch guy or gal,” you can always find inspiration in the recipe by preparing your own cake batter and homemade frosting. This recipe was created for those who are short on time and need a quick and easy dessert idea.

There are several companies that sell cherry juice, many of which are sold as a concentrate and require diluting with water. If you’re preparing these cupcakes during the summer you can likely find fresh cherry juice at your local farmers market in destinations like Niagara in Ontario, where they are grown locally. You can also prepare your own cherry juice at home by blending fresh or frozen cherries and passing the mixture through a sieve.

Depending on your budget you can purchase cheap maraschino cherry jars at the grocery store or visit a specialty bartending supply store like Cocktail Emporium to purchase gourmet imported Italian Luxardo cherries. Luxardo sells the worlds best maraschino cherries, the kind you often find at luxury hotel bars muddled in a Manhattan cocktail. 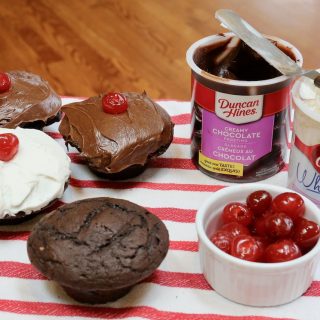