Looking to learn how to make the best Canadian Salad?

Perfect for a summer barbecue, our Great Canadian Salad, has been designed to inspire Canucks, at home and abroad, to reflect on the country’s delicious and diverse bounty!

What Is a Canadian Salad?

So what exactly is a Canadian Salad?

Canada may not have an ancient culinary history with globally recognized recipes such as Chinese Cucumber Salad, Middle Eastern Carrot and Tahini Salad or Melitzanosalata Greek Eggplant Dip.

British Columbia on the west coast cultivates some of the world’s best oysters, wild salmon and peaches. Alberta is famous for its cattle ranching tradition and barley fields, while the Maritimes conjure up drool-worthy visions of lobster, apple cider and foraged berries.

We challenge Canadians at home and abroad to assemble a salad that features ingredients unique to each province. We researched provincial agricultural output and local artisans crafting unique culinary products to help your family find inspiration.

I’m a proud and patriotic Canadian!

I’ve always believed that travel is the best classroom. Plan the ultimate Canadian Road Trip and you will learn so much about the country’s unique culinary history.

I’m always on the look out to enjoy a memorable local taste of place experience. I’m constantly surprised by the tasty treats I’ve discovered by exploring new corners of Canada’s vast backyard.

I learned Calgary’s cocktail bars pay homage to prohibition saloons, Saskatoon offers Canada’s only drive through pierogie restaurant and who knew Nova Scotia had such as lively wine and cider scene in the Annapolis Valley?

Our Canadian Salad is likely to raise eyebrows, with some readers who may complain that Alberta beef, Prince Edward Island potatoes or Nova Scotia lobster have been omitted from the recipe. Let me tell you, we toiled over what delicious ingredients to toss in our salad bowl!

Our goal was to create a Canadian salad recipe that actually tastes delicious. Would you want to eat a Canadian Salad tossed with seared beef, raw oysters, crispy bacon, leafy greens, boiled potatoes and sticky maple syrup? No thank you!

Since we’re based in Ontario we wanted to focus on sourcing the proteins locally. We bought bacon from Thatcher Farms in Guelph and pecans from Jewels Under the Kilt in Fergus. Once we had confirmed our protein source we rolled out a map of Canada and assembled a salad with ingredients that compliment each other.

If you are a Canadian seafood lover we’d suggest selecting a sustainable Oceanwise product from the East or West Coast before deciding on what carbs, fresh vegetables and flavourings to add to your vinaigrette. Similarly with beef, lamb or chicken, build a Canadian Salad recipe around your preferred protein.

We’re confident you’ll love our Canadian Salad recipe but feel free to substitute any ingredients you find difficult to source. If you can’t find a berry jam from Newfoundland why not make your own? If you live in Prince Edward Island and your neighbour is a peach farmer, support them at your local farmers market.

Our overall goal when developing this recipe was to showcase Canada’s great bounty. We encourage you to have fun with your Canadian Salad ingredients! So grab your tongs and get tossing!

My first visit to British Columbia was on a road trip with my family as a little kid. We drove from Edmonton to Victoria, jaw-dropping at the gorgeous Rocky Mountains.

My fondest food memory in British Columbia was biting into a juicy Okanagan peach, which was the size of a baseball and exploded all over my t-shirt.

In the Okanagan, peaches have been grown since the late 1800’s. You’ll find varieties including freestone and cling peaches like Redhaven, Cresthaven, O’Henry and Glowhavens.

We’ve traveled throughout Alberta, eating our way through Calgary, Banff, Edmonton and a cattle ranch near the Montana border.

Alberta offers a multitude of postcard-perfect landscapes. Explore the rockies in Banff and Jasper or enjoy an urban retreat in Edmonton and Calgary. As you drive through the Rocky Mountains towards the Prairies, you’ll meet an endless, flat expanse, home to some of Canada’s largest farms.

Barley is Canada’s third largest crop, after wheat and canola. Alberta produces the most barley in Canada, with local farmers harvesting over half of the country’s total output.

Studies have shown that barley can reduce the risk of heart disease and lower cholesterol. We love incorporating pearl barely in salads as it adds nutritious fibre, vitamins, minerals and a satisfying crunch.

We’ve traveled to Saskatchewan, eating our way through Saskatoon and hopping on an educational local farm tour.

Saskatchewan is characterized by flat plains and visited by photographers eager to capture the province’s vintage farmhouses and scenic wheat fields.

We’ve traveled to Manitoba, eating our way through Winnipeg and then heading north on a wilderness adventure to Churchill to swim with Beluga whales and photograph polar bears!

Manitoba is one of Canada’s largest producers of canola seed. Canola was developed in the 1970s by Canadian plant scientists (a close cousin to rapeseed) and is now the oil of choice for millions around the world.

There are over 7500 canola farmers in Manitoba, with a total of 43,000 canola farms across Canada. Canola farmers grow about 3 million acres of canola oil. While mostly associated with the Canadian Prairies, Canola is now seeding from British Columbia to Newfoundland. Last year, farmers in Newfoundland harvested its first canola field and produced their own canola oil for locals to enjoy.

We don’t just love using Canola oil in vinaigrette recipes because it’s a proudly Canadian product. Canola oil is also a great source of vitamins E and K and is packed with omega 3 fats. Omega 3 fats are an anti-inflammatory that can help protect against heart attacks and strokes. Canola oil also has the lowest amount of saturated fats—half that of olive oil. Saturated fats are bad fats and are linked to heart disease.

Ontario is Canada’s pork capital so we figured it was essential we garnished crispy bacon on the top of our Canadian Salad. Stratford is the province’s pork capital but farmers raise pigs across Ontario. We sourced our bacon from a family farm in Guelph, Thatcher Farms.

I really wanted to incorporate nuts in this recipe as the crunch adds a great textural component in contrast to soft cheese and juicy stone fruit. I was delighted to discover a local nut farm in Fergus, hilariously called Jewels Under the Kilt. They grow delicious pecans, walnuts, almonds and hazelnuts.

Almost 75% of Canada’s kale cultivation takes place in Ontario so we decided to showcase the healthy green as the backbone of our Canadian Salad. We prefer serving kale in salads as its hearty and doesn’t wilt as quickly as lettuce and mixed greens.

One cannot prepare an authentic Canadian Salad without incorporating traditional Quebecois maple syrup. In 2011, the Federation of Quebec Maple Syrup Producers produced 94% of Canada’s maple syrup and 77% of the world’s supply!

We’ve added maple syrup as a natural sweetener to our vinaigrette, but feel free to get creative with your Canadian Salad. If you’re tossing a West Coast inspired recipe why not smoke wild British Columbia salmon on a cedar plank with maple syrup? Or fry crispy bacon drizzled in maple syrup? As any patriotic Canadian knows, maple syrup has endless delicious uses in the kitchen!

During my visit to New Brunswick I sailed across the province’s famous Bay of Fundy, where the tides enjoy a daily dramatic rise and fall. We took a fishing boat from Nova Scotia up to the coast of New Brunswick and experienced one of the most thrilling wild whale encounters.

I’ve had the opportunity to go whale watching in Hawaii, Tahiti, Fiji, Australia, New Zealand, Iceland, Portugal, South Africa, Namibia, Ecuador, The Maldives, Mexico, Nicaragua, Costa Rica, Argentina, Brazil, Thailand and Bali. Without a doubt, my most memorable experience was in the Bay of Fundy, the body of water between Nova Scotia and New Brunswick.

In our Canadian Salad dressing we’ve included hard apple cider (Red Rover and SCOW Cider) and apple cider vinegar from New Brunswick. The province’s apple industry has a history of over 100 years of commercial production.

If you’re more keen to sip an ice cold cider from New Brunswick at dinner you could easily substitute it for a Nova Scotia wine (see below). A dry white wine acts as a lovely acidic base for a Canadian Salad. We tested both options in the kitchen and believe the classic pairing of apple and cheddar is the best way to go!

To many visiting oenophiles’ surprise, the province’s best kept secret are its award-winning Nova Scotia wineries. There are over 90 grape growers in the province. Grape growers cultivate over 70 varieties in Nova Scotia, with the top three being L’Acadie Blanc, Chardonnay and Riesling.

We’ve opted to serve our fresh summer salad with a bottle of cool Tidal Bay, a white wine by Jost Vineyards. The award-winning Nova Scotia winery is located in Malagash, overlooking the Northumberland Strait. Jost Vineyards’ Tidal Bay expresses aromatics of apple and pear on the nose with hints of lemon, peach, and floral notes.

We enjoyed a road trip of Prince Edward Island, eating our way through Charlottetown, West Point, The Inn at Bay Fortune, Miscouche, O’Leary, New Glasgow, Georgetown, and even visited Anne of Green Gables in Avonlea Village.

When the average Canadian thinks of feasting in Prince Edward Island they immediately drool over visions of butter doused lobster and crispy fried potatoes.

We’ve also included Eureka Black Gold in our salad dressing. Black garlic is a type of aged garlic whose browning is attributed to Maillard reaction rather than caramelization. It’s most commonly associated with Asian cuisine, particularly Korean.

Black Garlic is made by heating whole bulbs of garlic over the course of several weeks, a process that results in pungent black cloves. The aging process of black garlic removes the raw acrid flavour, creating cloves that are often described as tasting like sweet balsamic vinegar. It’s somewhat similar in flavour to roasted garlic or fermented garlic honey.

During our Adventure Canada Cruise of Newfoundland & Labrador guests had an opportunity several times to go foraging for wild berries with local food expert Alexandra Blagdon.

When visiting the province, just about every store sells jams, preserves and jellies made with locally foraged berries. Wild bush berries are so popular in Newfoundland they even have their own food festivals, such as Brigus Blueberry Festival in August and Humber Valley Strawberry Festival in July.

What To Serve With Canadian Salad

We love serving our Canadian Salad as an entree, enjoying large bowls with a slice of sourdough bread or gourmet crackers. We intentionally created a salad that is well balanced nutritionally so your body has everything it needs in one dish.

I usually double the recipe so we can spend the next 2-3 days enjoying the salad for lunch at work. The flavours intensify over time and thanks to the hearty nature of kale it doesn’t wilt and get limp or watery like mixed greens, spinach or lettuce.

If you’re serving this summer salad at a Canada Day barbecue, it pairs nicely with plump sausages, hamburgers, steaks or grilled prawns. 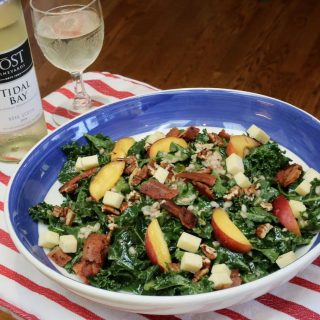