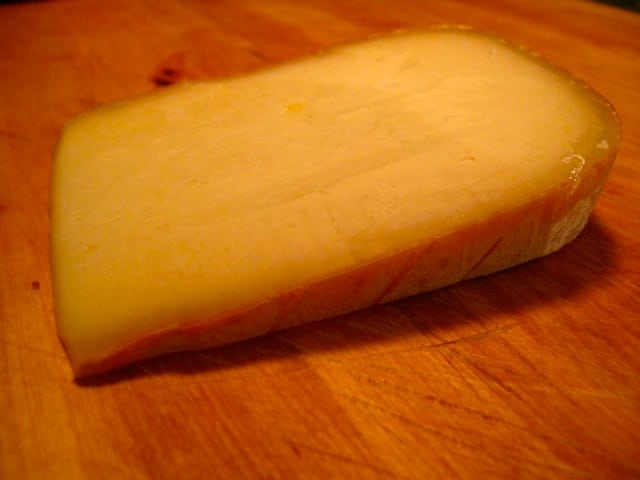 The Ossau-Iraty Brebis is a large family of cheeses that includes Abbaye de Belloc, Vallee d’Aspe and Istara. Records of this venerable artifact go back to at least the first century BC in the Roman market town of Toulouse. It has been known throughout history to have many names, mostly depending on which section of its cheesemaking region it came from. As is the case with many large families – or generic categories – of mountain cheeses, there are variations in appearance and flavor from one valley to the next as the complex, variegated, and rugged terroir unfolds and expresses itself. In general, the Ossau-Iraty cheese have a fine granularity to their texture and a nuttiness to their flavor with an underlying balance of sweet and savory. Many people feel they are reminiscent of a Parmigiano-Reggiano or of a mountain-style cow’s milk. The Ossau-Iratys tend to have a sweeter, gentler finish than those other cheeses. The family also features a mouthwatering quality that is more attributable to its unadorned simplicity than to excess salt.

This Sheep’s Milk cheese is from the Basque country, where it is called Iraty, and the nearby Bearn region, where it is called Ossau in the Pyrenees of extreme southwestern France. Curd is aged in cool caves for a minimum of 120 days. The natural rinds are dry, relatively thick, and smooth, ranging in color from orangish yellow to dark brownish gray. The pastes are firm and smooth, tending toward flaky with age and ivory to pale straw colored.

This cheese was featured in my Kim Crawford Cheese and Wine Tasting.

It pairs beautifully with Whites: Chardonnay and Sauvignon Blanc. On the red team you should be looking to pair with Cabernet Sauvignon, Pinot Noir or Gamay (Beaujolais).