Jamaican Chicken Soup is one of our favourite spicy soup recipes to cook from the Caribbean.

Our authentic Jamaican Soup recipe is quick and easy to make, ready to serve in under an hour.

Travel to the Caribbean by Cooking Jamaican Chicken Soup at Home

I love traveling to Latin America and the Caribbean.

As a professional food and travel journalist, I’ve had the opportunity to enjoy amazing meals in the Caribbean, from authentic markets to award winning restaurants.

For over ten years, I’ve been on the hunt for the best Jamaican Chicken Soup via adventures that had me sailing from turquoise waters and white sandy beaches in Jamaica, Cuba, Curacao and Puerto Rico.

I ate Jamaican Chicken Soup in the dining rooms of the island’s best restaurants found at Round Hill Resort, Half Moon Resort, The House Boat Grill, Scotchies Jerk Restaurant and several local eateries during a rural Jamaican road trip.

Where To Eat Authentic Jamaican Soup

If you live in a large city in Canada or America you’ll likely have access to a local Caribbean restaurant that serves a traditional Jamaican Chicken Soup.

Haven’t traveled to the Caribbean before? It may be helpful to first sample healthy Jamaican Soup at a local restaurant to better understand how the soup is served. You’ll get an idea for the desired chopped vegetables and spice level. You’ll also find inspiration on what to pair with Jamaican Soup such as such as fresh salads, jerk barbecue, corn on the cob and beans with rice.

Potatoes, squash, carrots and corn are available in abundance year round in Canada but we especially love to serve this savoury soup during Thanksgiving and the chilly winter season.

Our Jamaican Chicken Soup recipe features plump Caribbean-style dumplings called spinners. The dough is simple, made of all purpose flour and water. You can roll the dough into tiny balls or as a Jamaican chef would, by creating slender logs by rolling the dough between your hands.

While the desired texture for many soup dumplings is to produce a light and fluffy product so they float in broth, Jamaican spinners are dense and hearty. The poplar dumplings are known to locals as “spinners and sinkers” because their long, tapered shape causes them to sink and spin when bubbling in a pot.

All varieties of pumpkin (or squash) are nutritious, but butternut squash is a superfood because it contains high levels of carotenoids, which help combat cancer and support skin health.

Our recipe for Jamaican Chicken Soup is extra special because it showcases the versatility of chicken flavour and texture.

The thighs are first roasted in the oven and then once cooled the seasoned skins are removed and placed on a baking sheet. The crunchy skins then bake for an additional 10 minutes and transform into crispy Chicken Cracklings.

The thighs are later removed from the bone and warmed in the soup before serving. The meat is served perfectly soft and tender. The soup is served with crunchy chicken skin on top, offering a sublime textural contrast for poultry lovers!

What To Serve with Jamaican Chicken Soup

If you’re hosting a large dinner party you might want to serve our healthy Jamaican Chicken Soup as an appetizer before serving heartier mains.

If you have leftover Jamaican Chicken Soup you can store it in the fridge in an airtight container for up to a week. To reheat simply zap it in the microwave or simmer in a small saucepan on the stove.

How To Make Jamaican Chicken Soup 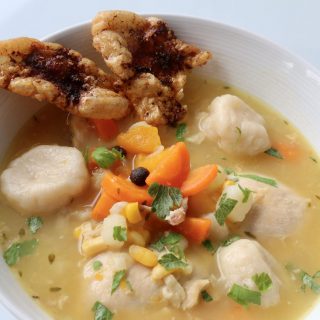