Zurek Soup is one of our favourite Eastern European soups to cook at home.

Our authentic Polish Sour Rye Zurek Soup recipe is quick and easy to make, ready to serve in under an hour.

If you’re a bread baker and looking for a new tasty sourdough discard recipe to try, Zurek features “zakwas,” a rye sourdough starter. If you have never made a sourdough starter before, please be aware that it takes approximately 4-5 days to care for before sufficiently active.

Travel to Poland by Cooking Zurek Soup at Home

For over ten years, I’ve been on the hunt for the best Sour Rye Zurek Soup. I’ve embarked on culinary adventures at Eastern European restaurants in Czech Republic, Slovakia, Hungary, Croatia, Bosnia, Estonia, Latvia and Russia.

In Poland, I slurped hot bowls of Zurek Soup in Krakow’s finest restaurants including the dining rooms at Sheraton Grand Krakow and Hotel Kanonicza 22.

After you’ve enjoyed your first few sips, you’ll realize why Zurek Soup is a must-try taste in Poland!

If you live in a large city in Canada or America you’ll likely have access to a local Polish restaurant that serves a traditional Zurek Soup.

Haven’t traveled to the Poland before? It may be helpful to first sample Sour Rye Polish Soup at a local restaurant to better understand how the soup is served. You’ll get an idea of how much kielbasa to add to each bowl and the desired sour flavour. You’ll also find inspiration on what to pair with homemade Zurek Soup including cabbage rolls, bigos, roasted beets, plump pierogi and Mizeria Creamy Polish Cucumber Salad.

Many of the best Ukrainian/Polish restaurants in the city are located in Roncesvalles Village, located between The Junction and Parkdale. Visit in the Fall for Roncesvalles Polish Fest to enjoy a fabulous taste of Polish culture.

Onions, carrots and parsnips are available in abundance year round in Canada but we especially love to serve this savoury soup during Thanksgiving and the chilly winter season.

Zurek Soup tastes rich and is uniquely soured with “Zakwas,” fermented rye sourdough starter. Polish families traditionally serve hot bowls of homemade Zurek during the Easter holidays, but you can order in in restaurants across Poland year round.

Zurek is also hilariously referred to by locals as Polish Hangover Soup. The hearty sausage and bacon-filled soup is a popular late night remedy after drinking too many Pilsner Urquell.

Packed with calcium and friendly probiotic bacteria, sour cream and yogurt help keep your bones strong and your gut healthy. Yogurt may also help reduce the risk of obesity, diabetes and some types of cancer.

What To Serve with Our Zurek Soup Recipe

If you have leftover Cream of Shrimp Soup you can store it in the fridge in an airtight container for up to a week. To reheat simply zap it in the microwave or simmer in a small saucepan on the stove. 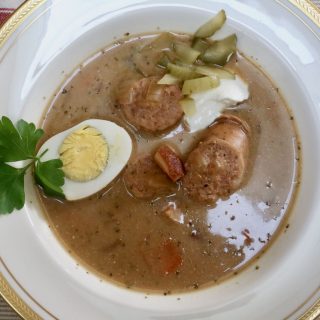