Ajiaco Cubano is one of our favourite Cuban Soup recipes to cook at home in the Fall and Winter.

Our authentic Cuban Chicken Soup recipe is quick and easy to make, ready to serve in under an hour.

Travel to Cuba by Cooking Ajiaco Cubano at Home

Authentic Ajiaco Cubano is a Cuban Chicken Soup featuring corn on the cob, shredded chicken breast, potatoes and onion. There are several regional versions of Ajiaco in Latin America. Outside of Cuba, the recipe is popular in Colombia and Peru.

After you’ve enjoyed your first few sips, you’ll realize why a steaming bowl of authentic Ajiaco Cubano is a must-try when visiting Cuba!

The exact origin of Ajiaco have been debated by scholars for years. In his book Lexicografia Antillana, former president of Cuba Alfredo Zayas y Alfonso stated that the word “ajiaco” derived from “aji”, the native Taíno word for “hot pepper.”

Cuban ethnologist Fernando Ortiz stated that ajiaco was a meal typical of the Taíno, and was an appropriate metaphor for Cuba as a melting pot.

In the Cuban city of Camagüey, the San Juan festival begins with the making and serving of ajiaco. Ajiaco is believed to have become popular in Cuba during the 16th century, particularly among rural Cubans.

Ayngelina Brogan is the founder of Bacon is Magic, a popular food and travel blog offering helpful resources on Cuba’s culinary culture. The food blogger first visited Cuba in 2018, “When I’m not traveling for my website or visiting family in Nova Scotia, I’m in Havana.”

So what does Brogan love most about Cuban cuisine? “I would say it’s most similar to Colombian food. It is not spicy. In fact most Latin American food is not spicy, other than Mexican and Peruvian food. But it has a lot of great stews, sauces and incredible pork dishes,” she said.

Brogan added, “Cuban food has been incorrectly marked as horrible. And I think that is because people are eating in the wrong places. Most resorts have cooks making international food and they’ve never been outside the country, so in a way they are guessing as to what flavours tourists want. But if travelers could just eat their food, they would love it.”

We asked the Cuban food expert to distinguish the difference between authentic Cuban food and Cuban-American cuisine. Brogan chirped, “Cuban food is impacted by product availability and the constant strain of food shortages. Cubans are incredible cooks and just use whatever is available. When you go to a restaurant there could be 10 things on the menu but only 3 are really available because there is no chicken or pork that day.”

Cuba is the largest country in the Caribbean, it takes a couple of days to get from one end of the island to the other. “Because of its size, Cuban food varies dramatically as well. You will find food in Baracoa that does not exist in Havana. So to outline a typical Cuban meal like other countries can be challenging,” said Bogan.

Brogan asserts you’ll find the best Cuban food in peoples homes, “Cubans don’t have the same restaurant culture we have. They think the best food is at home, so eating out is a newer phenomena. Many people still only eat out if they don’t have the option of eating at home. Although I wrote about 35 of my favourite Havana restaurants, I really encourage people to stay in Airbnb’s and ask their hosts to make some of their meals.”

If you’d like to slurp authentic Cuban Chicken Soup on holiday Brogan suggests you ask the owner of your casa particular to make Ajiaco Cubano for dinner otherwise you’re at the mercy of a restaurant having it on the menu and then having the ingredients to make it.

Ajiaco is more of a type of dish rather than a specific recipe. So it’s different wherever you go in Latin America. Brogan shared, “In Cuba it will never be spicy, ever. Some restaurants may keep a bottle of hot sauce that you need to ask for, but if you like things spicy I recommend bringing your own hot sauce. It will likely have less potato and more root vegetables like taro root, yucca and boniato.”

Where To Eat Authentic Ajiaco Cubano

If you live in a large city in Canada or America you’ll likely have access to a local Latin American restaurant that serves traditional Ajiaco Cubano.

Haven’t traveled to Cuba before? It may be helpful to first sample traditional Cuban Chicken Soup at a local restaurant to better understand how it is served. You’ll get an idea of how much corn on the cob, potatoes and shredded chicken to add to each bowl and the desired aroma and flavour. You’ll also find inspiration on what to pair with Cuban Soup including Medianoche, Tamales, Vaca Frita and Lechon Asado.

Carrot, celery, onion, bell pepper, corn, potatoes and cilantro are available in abundance year round in Canada but we especially love to serve this savoury soup in the chilly Fall and Winter season.

The best Cuban Chicken Soup is full of hearty ingredients like potatoes, corn on the cob, sweet potatoes, plantain and shredded chicken. The simple and restorative chicken broth is a great way to incorporate nutritious ingredients into your diet during the colder months of the year.

Our Cuban Soup recipe is packed full of healthy ingredients!

Packed with calcium and friendly probiotic bacteria, sour cream and yogurt help keep your bones strong and your gut healthy. Yogurt may also help reduce the risk of obesity, diabetes and some types of cancer.

This healthy Cuban Chicken Soup is quick and easy to make at home. We’ve included a few tips for first time soup makers!

What To Serve with Ajiaco Cubano

If you’re hosting a large dinner party you might want to serve our easy Ajiaco Cubano as an appetizer before serving heartier mains.

If you have leftover Ajiaco Cubano you can store it in the fridge in an airtight container for up to a week. To reheat simply zap it in the microwave or simmer in a small saucepan on the stove.

We love doubling our soup recipes so can store leftovers in the freezer and save time on cooking in the kitchen. We suggest storing leftover soup in Pyrex freezer safe containers that have a snug lid so there’s not spilling. Once the soup has cooled you may want to use a knife to remove the kernels from the corn cobs. This will reduce the volume of your soup and sae space in your freezer. 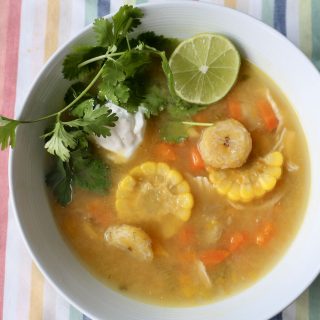