Cream of Shrimp Soup is one of our favourite soups to cook at home from Louisiana.

Our authentic Cream of Shrimp Soup, also known as Cajun Shrimp Chowder, Louisiana Soup and Shrimp and Corn Soup, is quick and easy to make, ready to serve in under an hour.

Travel to Louisiana by Cooking Cream of Shrimp Soup at Home

I love traveling to the United States.

As a professional food and travel journalist, I’ve had the opportunity to enjoy amazing meals in the American South, from traditional markets to award winning restaurants.

In New Orleans, I slurped hot bowls of Cajun Cream of Shrimp Soup in the city’s finest restaurants including Dickie Brennan’s Tableau, Ruby Slipper Cafe, The Court of Two Sisters, Luke Restaurant and on a rural road trip to the luxurious Houmas House.

Where To Eat Authentic Cream of Shrimp Soup

If you live in a large city in Canada or America you’ll likely have access to a local Cajun or Creole restaurant that serves a traditional Cream of Shrimp Soup.

Haven’t traveled to the Louisiana before? It may be helpful to first sample Cream of Shrimp Soup at a local restaurant to better understand how the soup is served. You’ll get an idea of what vegetables you want to include and how thick or thin you want to prepare your creamy Cajun soup. You’ll also find inspiration on what to pair with Cream of Shrimp Soup such as such as cornbread, grits or spicy cajun salad.

Potatoes, corn, peppers, onions and tomatoes are available in abundance year round in Canada but we especially love to serve this savoury soup during Thanksgiving and the chilly winter season.

Our homemade Cream of Shrimp Soup recipe is packed full of healthy ingredients!

What To Serve with Our Cream of Shrimp Soup Recipe

If you have leftover Cream of Shrimp Soup you can store it in the fridge in an airtight container for up to a week. To reheat simply zap it in the microwave or simmer in a small saucepan on the stove.

How To Make Cajun Cream of Shrimp Soup 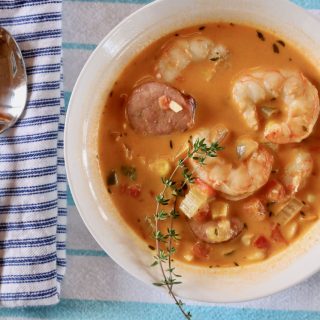