Calgary Ginger Beef is one of Alberta’s most famous culinary creations.

Travel to Alberta by Cooking Calgary Ginger Beef at Home

I love traveling across Canada. I was born in Edmonton, so consider any visit to Canada’s scenic Prairie region a return to home.

Drive across Manitoba, Saskatchewan and Alberta towards British Columbia and you’ll find sprawling farms as far as the eye can see. There’s a saying that every city and small town in Canada has a Chinese restaurant, which is undeniably true.

Chinese labour was used to build Canada’s railroad. Over 17,000 Chinese came to Canada from 1881 through 1884. Several thousand came from the coastal areas of the United States where they helped build the American transcontinental railroad, but the majority arrived directly from southern China.

After the Chinese workers finished building Canada’s railway, many settled in communities from Vancouver to St. John’s, opening some of the first Canadian Chinese restaurants. The Globe and Mail did an excellent job chronicling the history of Chinese restaurants in Canada in the feature Chop Suey Nation.

Most Chinese restaurants in Canada were family run businesses. These entrepreneurial families had to adapt traditional Chinese recipes to suit local palates while incorporating ingredients that were available on local grocery store shelves.

Calgary is known for being home to a plethora of innovative chefs. Calgary Ginger Beef is just one of the classic dishes that was invented in Alberta’s biggest city, quickly making its way onto Chinese restaurant menus across the country.

In the 1970’s Silver Inn’s Chef Wong began to push the boundaries, adding his own flare to a popular Northern Chinese dish in Calgary’s Chinatown. Calgarians quickly developed an addiction for what was then described as “deep fried shredded beef in chili sauce”.

News of the trendy dish quickly caught fire and it now lives on as a national favourite and a dish so iconic that it was included in the Royal Alberta Museum’s Chop Suey on the Prairies exhibition.

Local food writer Elizabeth Chorney-Booth shared, “Local legend is that Wong (whose wife Lily co-owned the restaurant with her sister) was finding that non-Asian customers were more interested in eating crispy fried food than more traditional Chinese recipes. He adapted an existing beef recipe by coating the strips in batter and deep frying them to better suit local tastes.”

So does Calgary Ginger Beef taste the same at every restaurant? Chorney-Booth added, “The recipe does differ from place to place. The commonality is that for it to be Alberta-style ginger beef (as opposed to other Chinese dishes that flavour beef with a ginger sauce), the beef has to be cut in very thin, almost stringy strips, it has to be coated with a batter that becomes very crispy after frying, and the sauce has to be sticky and sweet. The variations usually have to do with the sauce and colour: I’ve seen ginger beef that is a golden yellow in colour and others that are the colour of  Coca-Cola.”

The patriotic foodie from Calgary exclaimed, “To me, the most fascinating thing about ginger beef is that it is so uniquely Albertan. I would never dream of ordering Chinese food without it.”

Calgary Beef Tip: if you’re ordering take out, make sure that you give it a good stir before eating. That way the beef is evenly coated with the sauce, which tends to sink to the bottom of the take-out container.

Where To Eat Ginger Beef in Calgary

I love traveling to Alberta as the province offers a unique mix of culture, history and natural beauty. Many people compare the province to Texas, citing similarities to their oil industries, cowboys and delicious barbecued beef.

The best way to enjoy authentic Calgary Ginger Beef is to visit the city itself. Here is a list of the best restaurants in Calgary to order Crispy Ginger Beef:

While the best place to eat Crispy Ginger Beef for the first time is in its hometown of Calgary, you can also find the dish at Chinese restaurants across Canada.

One day when I was having a Chinese food craving I thought to myself, “why not perfect my very own Calgary Ginger Beef recipe to make at home?”

Calgary Ginger Beef is prepared by submerging thin strips of battered skirt steak into bubbling vegetable oil. If you don’t have a deep frier at home, we suggest using a large wok.

You only need to fill the wok half full with vegetable oil. This will give you enough room to manage any oil splatter when cooking. You can use a regular pot but a wok is much safer as it has a shallow bottom and wide rim.

Some Calgary Ginger Beef recipes instruct cooks to dredge steak slices in cornstarch before submerging in oil. Other recipes feature a wet batter made of beaten egg and cornstarch, which ends up yielding a tempura-like consistency. We’ve tested both recipe variations and can confirm a wet batter produces a superior product.

In order to create the perfect texture and consistency of the dish, be sure to finely mince the garlic and ginger so no large chunks appear. The scallion, peppers and carrot should all be sliced uniformly as thin julienned strips. This will ensure they cook at at a similar rate and are easy to eat with chopsticks.

What To Serve With Ginger Beef

If you’re making our Calgary Ginger Beef recipe for a potluck or dinner party its best to create a menu that is well balanced in flavour and texture.

Can You Make The Dish In Advance?

If you are making Calgary Ginger Beef for a dinner party we suggest slicing the vegetables in advance and whisking together the sweet and tangy sauce.

You could also quickly deep fry the beef strips until they are golden brown then cool them on a rack until moments before you’re ready to serve the meal. Be sure to only flash fry the crispy beef strips as you don’t want to overcook them. The centre of the beef strips should be raw as you will be reheating them with the vegetable stir fry and sauce before eating.

We do not suggest making the entire dish in advance and reheating it for guests as you will lose the desired crispy beef exterior. The sauce absorbs into the cornstarch crust, quickly changing the dishes desired texture.

How To Store Crispy Ginger Beef

We typically double the recipe when making homemade Crispy Ginger Beef as we like to enjoy it for lunch and dinner throughout the week.

Leftovers can be stored in an airtight container for 2-3 days. Do not freeze cooked Calgary Ginger Beef and reheat it later, the batter and sauce will congeal into a slimy, unappealing mess. 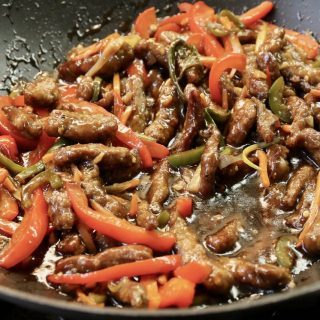