Babka is a dense bread that is traditionally swirled with either chocolate or cinnamon and often topped with streusel or shiny glaze. Seinfeld hilariously shared his love for the popular Jewish bread in one of the episodes of his hit show in the 90s.

Cinnamon Babka has always been traditionally found at Jewish or Eastern European bakeries. Over the last few years babka enjoyed a renaissance and in Canada and America, can be found at cafes, bakeries and your favourite food blogs.

Babka is considered irresistible because of its contrast between slightly dry layers of bread and sticky swirls of chocolate or cinnamon spread. Babka is both dense and light at the same time, making it a perfect companion to your morning coffee. 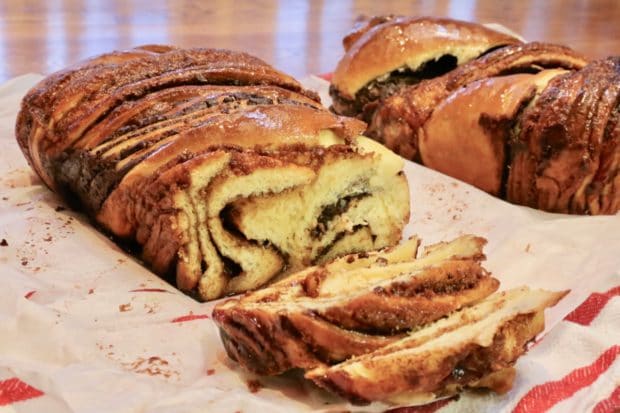 Babka sliced fresh out of the oven reveals a swirl of dark chocolate.

The Origins of Babka

Babka means “little grandmother,” in Ukranian, Russian and Eastern European Yiddish. For years babka has been a tradition in Jewish baking. On Shabbat, grandmothers would twist leftover scraps of challah with seeds and nuts. This reformed dough would produce a delicious Jewish babka, but far less sweet than the varieties we see today.

When to Serve Cinnamon Babka

You don’t have to be an expert in Jewish baking to perfect the art of babka at home. If you’ve got chocolate lovers in your family or love to drool over cinnamon buns this Cinnamon Babka Recipe is perfect for you!

Step By Step: How To Make Babka

Making homemade babka involves a few easy steps. We’ve included photos to showcase each major step and also have a detailed recipe you can print off at the bottom of the page. 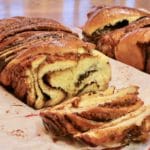