Bak Chor Mee is one of our favourite soups from Singapore to enjoy during the colder months of the year.

Our homemade Minced Pork Noodle Soup recipe is a labour of love. Some of the components of the dish can be prepared a day in advance, like the marinated pork and braised mushrooms. The day you are serving Singaporean Bak Chor Mee you can simply gather the ingredients and have steaming noodle soup bowls ready to serve in under an hour.

What Is Bak Chor Mee?

Bak Chor Mee can be served as a noodle dish, or transformed into a Minced Pork Noodle Soup with added broth. I prefer the soup version, which is served with a large spoon and chopsticks.

Singaporean chefs boil chewy egg noodles (mee pok or mee kia) and toss them in a savoury, tangy and spicy sauce. I prefer to use mee kia, the thinner egg noodles for this dish as they are the most authentic and fun to eat.

Travel to Singapore by Cooking Pork Noodle Soup at Home

After my contract ended in Seoul I travelled throughout southeast Asia for 6 months, visiting the Philippines, Indonesia, Malaysia, Singapore, Cambodia, Laos, Myanmar, Thailand and Vietnam.

I spent 3 jam-packed days adventuring through the spotless streets of Singapore. I arrived to Asia’s smallest country on a flight from Kuching on the Island of Borneo after scuba diving the world famous coral reefs of Sipadan.

My fondest memories of my time in the tiny Southeast Asian city were visits to the world famous Singapore Zoo and National Museum, which has a captivating exhibit on the city’s famous hawker food culture. I ate every breakfast, lunch and dinner in Singapore at al fresco food stalls featuring spicy Indian curry, Chinese dim sum, coconut milk infused Malay soups and Indonesian satay skewers.

I’ll never forget my first taste of Bak Chor Mee. I got soaking wet from a midday rainstorm and ran into a hawker stall to keep dry. While the city’s gutters filled with the rush of fresh water I passed the time by ordering a bowl of Singaporean Pork Noodle Soup.

After slurping down those chewy noodles I immediately knew why Bak Chor Mee was so often referred to as Singapore’s favourite comfort food.

Mushrooms, pork, shallots and scallions are available in abundance year round in Canada but we especially love to serve this savoury Singapore soup in the colder fall and winter months. A steaming bowl is the perfect comfort food on a frigid day.

Where To Eat Soup

Shallots and Scallions are a member of the onion family, a humble vegetable packed with vitamins, minerals and phytochemicals. Regular consumption of leeks can help boost digestive health and reduce the risk of developing heart disease.

This homemade Singaporean soup is quick and easy to make at home. We’ve included a few tips for first time soup makers!

What To Serve with Bak Chor Mee

If you’re hosting a large dinner party you might want to serve small bowls of our Singaporean Pork Noodle Soup as an appetizer before serving heartier mains.

If you have leftover soup you can store it in the fridge in an airtight container for up to a week. To reheat simply zap it in the microwave or simmer in a small saucepan on the stove.

We love doubling our soup recipes so we can store leftovers in the freezer and save time on cooking in the kitchen. We suggest storing leftover soup in Pyrex freezer safe containers that have a snug lid so there’s no spilling. My mother often uses old glass pasta sauce jars to store soup in the freezer.

If you have leftover Bak Chor Mee, we suggest storing the broth with braised mushrooms, pork balls, pork slices and minced pork in the fridge or freezer. You’ll want to make fresh noodles whenever you decide to reheat and serve the recipe again. 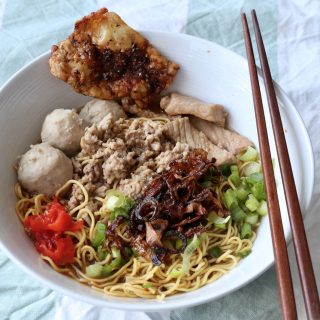