Portuguese Bean Soup is one of our favourite hearty soups to enjoy during the cold Fall and Winter months.

Our homemade Portuguese Bean Soup recipe, also known as Caldo Verde, is quick and easy to make, ready to serve in under 30 minutes!

What is Portuguese Bean Soup?

Caldo Verde originated from the Minho Province in northern Portugal. Today, it is a traditional national soup that has spread across the nation and abroad, especially to places where a large community of Portuguese migrants have settled such as Brazil, Massachusetts and New Jersey.

In Portugal, caldo verde is typically consumed during Portuguese celebrations, such as weddings and birthdays. For example, during the St. John Festival in Braga, it is often enjoyed before a main course or as a late supper. This soup is served in a tigela, a traditional earthenware bowl.

Caldo Verde, translating to “green broth,” is the Portuguese counterpart to Italian Zuppa Toscana. It features local cured sausage, bitter greens, and potatoes. Since Portuguese Bean Soup is a hearty comfort food historically made in homes all over the country, there isn’t just one way to prepare it.

Many variations of this popular Portuguese soup exist thanks to passed down regional recipes that are now family cooking traditions. Some families use kale, while others chop collard or mustard greens into the soup. Most recipes include Portuguese cured sausage with a strong garlic flavour called Chouriço. Other recipes use Linguiça sausages.

Travel to Portugal by Cooking Bean, Kale and Sausage Soup at Home

What I love most about traveling to Portugal is the opportunity to sample unique dishes in each region and city. Take a Portuguese food tour and you’ll learn that popular dishes in Lisbon and Porto are unique to what you might find on restaurant menus in Sintra and The Algarve.

Once back home from a Portuguese holiday you’ll have a newfound appreciation for the flavours of Portugual and can impress friends and family by making our quick & easy Portuguese Bean Soup recipe.

Where To Eat Portuguese Bean Soup

Fun Fact: A regional take on Portuguese Bean Soup can be found in restaurants throughout Hawaii. If you’re a soup lover visiting Oahu, Maui or the Big Island, you’ll find Hawaii’s unique take on the hearty soup on many menus. The ingredients in Hawaiian Portuguese Bean Soup typically include ham hocks, celery, carrots, stewed tomatoes, elbow macaroni and cabbage.

Onions, garlic, potatoes, kale, and beans are available in abundance year round in Canada but we especially love to serve this savoury soup in the Fall at Thanksgiving.

The Portuguese love pork so much you’ll find it in almost everything. So you guessed it, traditional Portuguese Bean Soup is not vegetarian or vegan.

You can transform our authentic Caldo Verde recipe into a vegetarian friendly dish by substituting chicken stock with vegetable broth and omitting the cured sausage. You could make a vegan Portuguese Soup by leaving out the whipping cream.

Low in calories and high in vitamins K, C, A and the B vitamin folate, kale supports your eyesight, bones, and circulation.

All types of dried beans are rich in cholesterol-lowering fibre. They are also a low-fat source of iron, vital for the cardiovascular system and for energy, and contain B vitamins that protect against heart disease.

This healthy homemade soup recipe is quick and easy to make at home. We’ve included a few tips for first time soup makers!

What To Serve with Portuguese Bean Soup 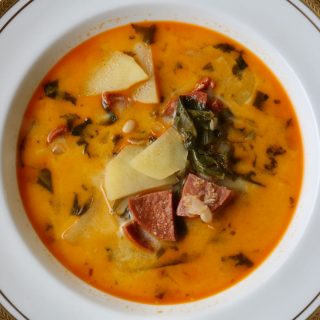