Looking to learn how to make the the best homemade Vegetarian Paneer Soup recipe?

Our quick & easy Indian Paneer Soup is a perfect dinner idea for a cold day. It takes just under 30 minutes to make!

What Is Paneer Soup?

Paneer is a fresh cheese common in the Indian subcontinent. It is an unaged, non-melting soft cheese made by curdling milk with a fruit- or vegetable-derived acid, such as lemon juice. Its acid-set form before pressing is called chhena.

If you’re vegetarian or looking for new ways to add healthy protein to your diet, paneer offers a tasty addition to Indian soups.

Our creamy Paneer Soup is flavoured with coconut milk, garlic, ginger, mustard seed and curry leaf. Garnish with your favourite herbs like cilantro or basil.

Travel to India by Cooking Paneer Soup at Home

If you’re planning an Indian travel adventure, you’ll likely have the opportunity to sample a variety of regional Paneer Soup recipes. Once you return home from your trip, share your experience with family and friends by cooking our healthy Paneer Soup recipe at home.

Where To Eat Vegetarian Paneer Soup

If you live in a large city in Canada or America you’ll likely have access to local Indian restaurants that serve traditional Paneer Soup.

Haven’t traveled to Indian before? It may be helpful to first sample Paneer Soup at a local restaurant to better understand how the dish is served. You can assess the paneer to broth ratio, take notes on the perfect garnishes and determine the ideal spicy heat level before trying to make it at home.

Garlic, ginger, mushrooms, cabbage, cilantro and chili are available in abundance year round in Canada but we especially love to serve this healthy soup during the chilly winter season.

The best Paneer Soup recipe is full of healthy ingredients. This quick and easy Vegetarian Paneer Soup is a great way to incorporate nutritious ingredients into your diet during the colder months of the year.

Our Paneer Soup recipe is packed full of healthy ingredients!

This healthy Paneer Soup recipe is quick and easy to make at home. We’ve included a few tips for first time soup makers!

What To Serve with Creamy Paneer Soup

If you’re hosting a large dinner party you might want to serve our easy Paneer Soup recipe as an appetizer before serving heartier mains.

If you have leftover Vegetarian Paneer Soup you can store it in the fridge in an airtight container for 3-4 days. To reheat simply zap it in the microwave or simmer in a small saucepan on the stove.

How To Make Creamy Paneer Soup 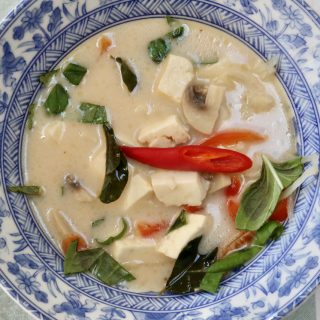