Chiang Mai Noodles is our favourite rich and creamy Thai beef recipe to serve at dinner.

We’ve traveled extensively through Thailand and eaten at all of the best Thai restaurants in Toronto. We’ve taken Thai cooking classes in Chang Mai and learned expert cooking techniques courtesy of the executive chef at JW Marriott Phuket Resort.

Cooking Thai food at home is easier than you may think. Our flavourful recipe takes just 2 hours to prepare and keeps in the fridge for several days. You’ll love loitering over these Chang Mai Noodle leftovers!

Travel to Thailand by Making Chiang Mai Noodles at Home

I love traveling through Asia. My first visit had me living in South Korea for a year as a teacher and it’s where I was first introduced to fermented vegetables like kimchi.

After my contract ended in Seoul I travelled throughout southeast Asia for 6 months, visiting the Philippines, Indonesia, Malaysia, Singapore, Cambodia, Myanmar, Thailand, Vietnam and Laos.

On my first visit I spent over a month backpacking through Thailand. I’ve revisited Thailand two times since as a food and travel journalist and always love to discover new regional dishes. Over the years I’ve explored Thai destinations such as Ko Phi Phi, Krabi, Chiang Khong, Chang Mai, Sukothai and Bangkok.

What I found most fascinating is Thailand’s distinct regional food cultures. Much like the regional cuisines found in Germany, Italy or Spain, each town in Thailand had its own local speciality.

Where To Eat Chiang Mai Noodles

If you live in a large city in Canada or America you’ll likely have access to a local Thai restaurant that serves traditional Chiang Mai Noodles.

Haven’t traveled to Thailand before? It may be helpful to first sample Chiang Mai Noodles at a local Thai restaurant to better understand how the dish is served. You can also assess the variety of ingredients used and sample the correct texture before trying to make Khao Soi at home from scratch.

What Is Khao Soi?

Often referred to as “curry noodles,” it’s served by the Muslim community, which is why it is never prepared with pork. The dish was originally influenced by the Chin Haws, a Chinese Muslim community who migrated to Thailand via neighbouring Myanmar.

Chiang Mai, having been a popular stop on ancient spice routes and under Burmese control for over 200 years, is home to several examples of finger-licking-good fusion. Along with typical Thai ingredients like lemongrass and galangal, the curry paste contains Chinese aromatics and spices like ginger and black cardamom, as well as those associated with Burmese cooking, such as curry powder, coriander seeds and turmeric.

Khao Soi translates to “cut rice,” in Thai but some believe it is a corruption of the Burmese word for noodles, “khao swe.”

The two countries that are most associated with curry are India and Thailand. Each nation prepares curry in a unique way. In general, the term refers to a savoury meat, seafood or vegetable dish cooked in a sauce that is accompanied by rice, flatbread or fresh salads.

In India, curry (or masala) encompasses a variety of dishes that use a complex combination of spices or herbs, usually including ground turmeric, cumin, coriander, ginger, and fresh or dried chilies. You’ll find unique regional takes on the Indian curry concept in neighbouring countries such as Pakistan, Bhutan, Bangladesh, Nepal, Sri Lanka and The Maldives.

Indian curries generally do not feature beef, as the cow is considered a sacred animal. The only region in India you are likely to find beef on a menu is in Kerala, which was colonized by the Portuguese and later by the Dutch. You can enjoy beef dishes in the colonial city of Cochin as well as luxury resorts like Coconut Lagoon.

In Thailand, curry refers both to dishes in Thai cuisine that are made with various types of curry paste and to the pastes themselves. A wet Thai curry is made from curry paste, coconut milk, meat, seafood, vegetables and herbs.

Masaman Curry uniquely influenced Thai cooking thanks to visiting Persian traders. Masaman is a broken translation for Muslim. It originated in the south of Thailand near the border of Malaysia and is a thick sauce with a mild, slightly sweet flavour. Massaman curry dishes distinguish themselves by the inclusion of several whole spices and peanuts.

Penang Curry is sweeter than its sister, spicy Thai Red Curry. It is named for the island of Penang off the west coast of Malaysia and is served sometimes topped with coconut cream.

Feel free to use your favourite store bought Thai curry paste at the grocery store or prepare from scratch in your kitchen. Use a mortar and pestle to grind all the ingredients together until you’ve created a smooth and fragrant mixture. This homemade Thai red curry paste recipe yields 4-5 tablespoons.

What Meat To Use in Chiang Mai Noodles

Tough cuts of meat contain large amounts of collagen, which require long cooking times to break down into rich gelatin. That’s why tougher cuts of meat like the chuck or shoulder are generally used for Thai curries.

Chiang Mai Noodles are traditionally prepared with beef short ribs. You can prepare short ribs in an Instant Pot, slow cooker, or braise them in a covered pot on the stove over low heat like we have in this recipe.

If it’s your first time making Khao Soi we suggest you start by reading the ingredients list and recipe directions below.

When slicing the spicy red chilies, be sure to wear gloves and avoid touching the seeds as they contain oil that will irritate your eyes and skin. I once forgot to wear gloves when slicing a mountain of birds eye chilies and spent hours suffering the sting of burning hands. If you do find yourself with swollen and irritated skin from chili oil exposure, soak your irritated skin in cold milk or yogurt.

You can also increase the heat of the dish by adding the chili seeds into the stir fry rather than disposing of them. If you have a low tolerance for spicy food we still suggest adding peppers as they offer an important flavour profile to the dish. Simply remove all of seeds to ensure the spice level is to your pallet’s preference.

You can typically purchase fresh Chinese egg noodles at your local Asian grocer or supermarket where wonton and egg roll wrappers are stored. If you’re an avid cook looking to make everything from scratch you can also make homemade Chinese egg noodles in your kitchen.

If you’re hosting a Chiang Mai Noodle dinner we suggest setting up your soup bowls and chopsticks on the kitchen counter beside the stove. Scoop cooked egg noodles into the bottom of each bowl and top with braised beef and coconut sauce. Allow each guest to add their own toppings at a DIY garnish station before sitting down to feast!

What To Serve with Chiang Mai Noodles

If you have Chiang Mai Noodle leftovers we suggest storing them in the fridge in separate bowls. Store crunchy deep fried noodles in a ziplock bag at room temperature so they don’t go limp or soggy. Store the coconut curry sauce and chunks of braised beef in an airtight container in the fridge for 2-3 days.

When reheating your leftover Khao Soi, boil the fresh egg noodles in water, reheat the beef coconut curry in the microwave or on your stove and top with remaining garnishes. 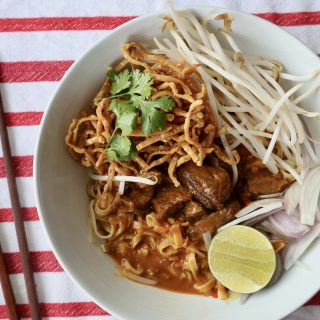