We love making this Bun Cha recipe on a hot summer day using fresh herbs from the garden. If you’re looking for a healthy gluten-free noodle bowl try our Bun Cha recipe at home.

Travel to Vietnam by Cooking Our Bun Cha Recipe

After my contract ended in Seoul I travelled throughout southeast Asia for 6 months, visiting the Philippines, Indonesia, Malaysia, Singapore, Cambodia, Laos, Myanmar, Thailand and Vietnam.

I spent over a month traveling by bus through Vietnam. I started in the south, spending a few days in Saigon before exploring the floating markets in the nearby Mekong Delta. I then took a series of night buses north making stops in Nha Trang, Hoi An, Hue, Halong Bay and Hanoi.

What I found most fascinating is Vietnam’s distinct regional food cultures. Much like the regional cuisines found in France, Germany, Italy or Spain, each town in Vietnam had its own local speciality.

Where To Eat Vietnamese Bun Cha

If you live in a large city in Canada or America you’ll likely have access to a local Vietnamese restaurant that serves a traditional Bun Cha recipe.

Haven’t traveled to Vietnam before? It may be helpful to first sample Bun Cha at a local Vietnamese restaurant to better understand how the dish is served. You can assess the texture of the Vietnamese pork meatballs and get creative ideas on what toppings to serve with your healthy vermicelli noodle bowl.

What Is Vietnamese Bun Cha?

Bun Cha is a traditional Vietnamese dish of grilled pork and rice noodles. It’s thought to have originated in Hanoi, Vietnam.

Bun Cha still remains very popular in Hanoi, considered by many to be the city’s ubiquitous dish. Outside Hanoi and across Vietnam, a similar dish of rice vermicelli noodles and crispy grilled meat called bún thịt nướng is also served with great fan fare.

How Do You Eat Bun Cha?

Thin rice noodles are tossed in fresh herbs like mint and cilantro and then topped with crispy grilled pork meatballs and chopped vegetables like carrot and daikon radish.

If you’ve never had nuoc cham before we suggest drizzling a small amount over the bun cha noodle bowl. Mix the noodles with your chopsticks and have a taste. Add more nuoc cham if you are looking for more spicy heat and acid.

If you don’t want your entire dish to be smothered in nuoc cham you can also chose to grab each meatball with chopsticks and simply dip in the sauce to add a splash of spicy acid. You’ll love how the nuoc cham contrasts with fatty meatballs.

Ready to cook our homemade Vietnamese Bun Cha recipe? We suggest reading the recipe directions in detail to ensure you understand the step by step process.

Before you even start frying the meatballs we suggest setting the table with a large plate filled with fresh lettuce and herbs as well as a bottle of sweet chili sauce and nuoc cham.

These Vietnamese meatballs are traditionally made with minced pork but if you don’t eat pork you could always substitute with minced beef, chicken, turkey or ground shrimp. Vegans and vegetarians can also substitute the minced pork with meat-free products like Beyond Meat.

If you have a barbecue feel free to grill the minced pork patties as they will impart a yummy smokey flavour. If you’re frying the meatballs in your kitchen, use a non-stick skillet and drain the fat between each batch to avoid hot oil splatter on the stove.

It’s important to use chopped lemongrass in the mince pork meatballs but you can also add additional flavourings like chopped chives or scallions.

If you are serving a large group, we suggest heating your oven to 300F and keeping the finished meatballs warm until ready to serve.

Can You Make This Recipe in Advance?

You can easily prepare portions of this bun cha recipe in advance so assembly before you serve your meal is quick and easy.

If you’re hosting a dinner party and serving bun cha bowls to a crowd we suggest spending the morning preparing the nuoc cham. You can also prepare the pork meatballs in advance, lining the plump patties on a baking sheet and storing them in the fridge covered in plastic wrap.

An hour before you are planning on sitting down to dinner, remove the pork meatballs from the fridge and fry them on both sides until golden brown. Store the cooked meatballs on a baking sheet in a warm oven until ready to build your vermicelli bowls.

Whenever we host a bun cha noodle bowl party we never have leftovers as the dish is such a crowd pleaser!

But if you do find yourself with leftovers, feel free to store the cooked meatballs in an airtight container in your fridge for up to 3 days.

We often like to double our bun cha recipe and store the leftover cooked meatballs in the freezer. If you’re looking for a last minute dinner idea or are hosting an impromptu lunch it’s easy to grab them out of the freezer and thaw them before guests arrive.

You’ll just need to prepare the noodles, chopped vegetables and herbs and nuoc cham sauce. Simply place the leftover meatballs on a baking sheet and reheat in the oven before serving.

While bun cha meatballs are easy to reheat and freeze, we do not suggest storing leftover marinated rice noodles in the fridge or freezer as they get soggy.

What To Serve With Our Bun Cha Recipe?

Our bun cha recipe is served as a hearty and healthy noodle bowl with Vietnamese pork & shrimp egg rolls. The bowls are large enough to fill you up at lunch or dinner. 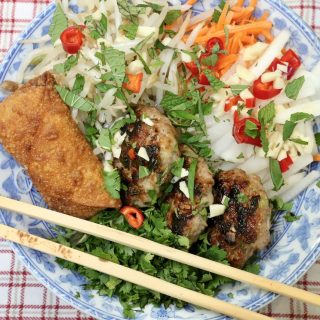 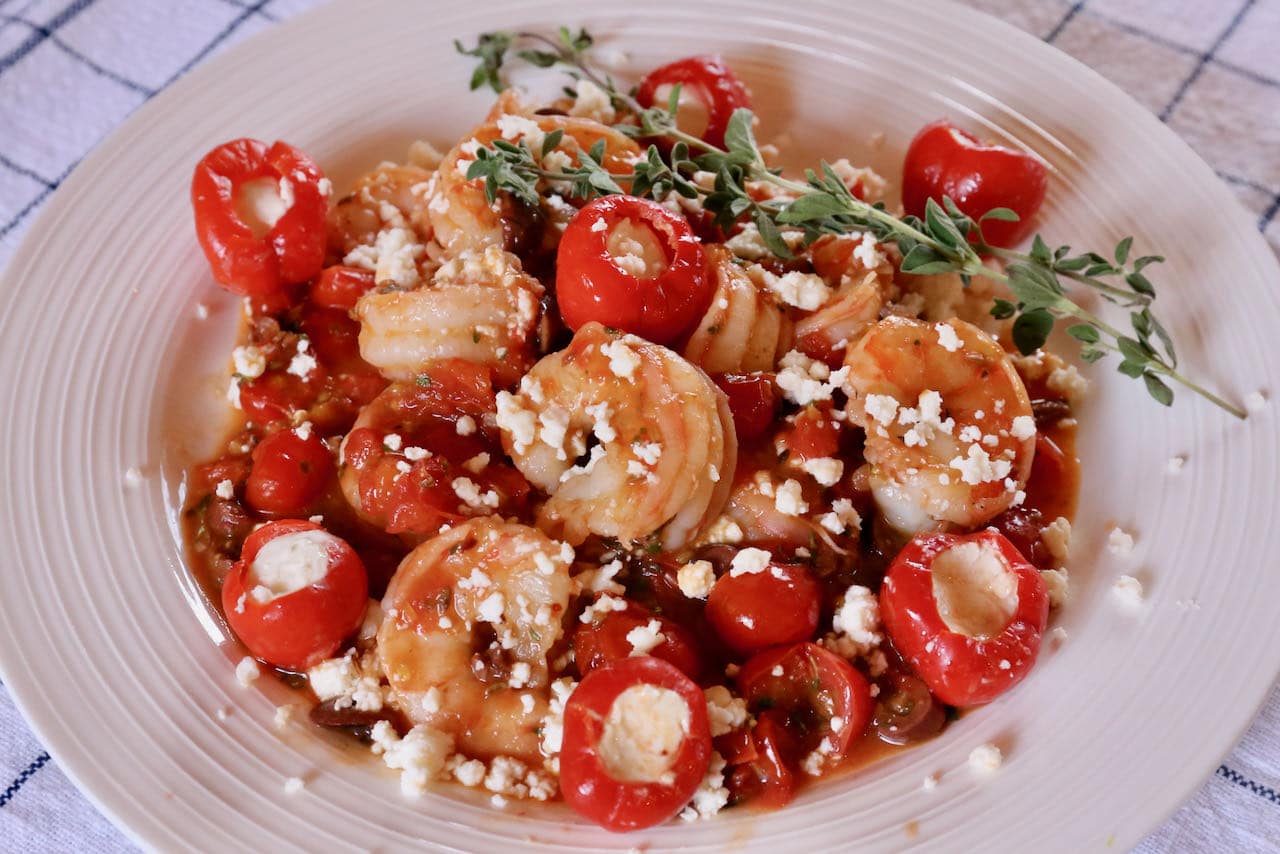 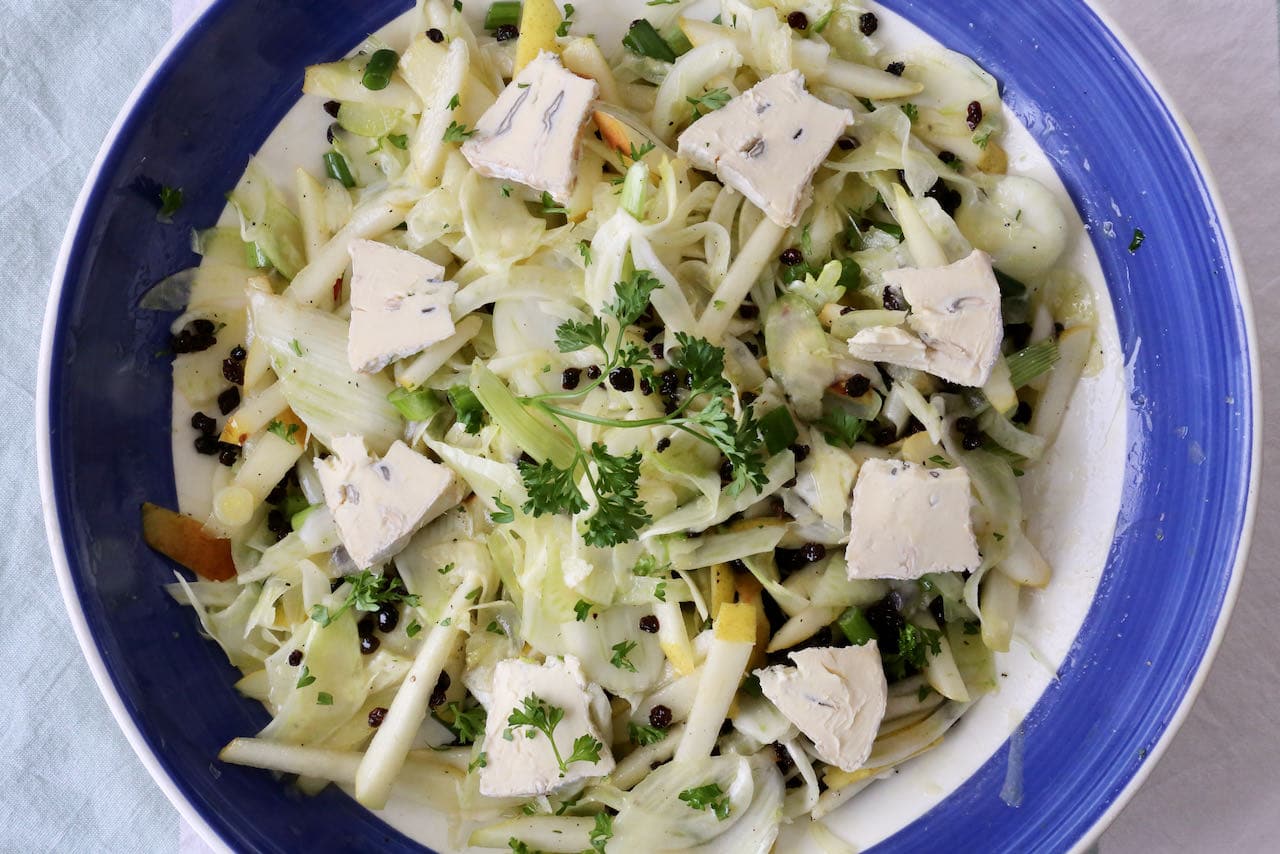