Our Strawberry Dutch Baby recipe is a family brunch dish favourite during the summer.

We use local Ontario strawberries from the province’s Strawberry Capital, Norfolk County, as well as stalks of rhubarb grown in our own backyard garden.

At breakfast, serve each slice of Rhubarb Strawberry Dutch Baby with sliced berries and maple syrup. For dessert, serve the light and crispy German pancake with a scoop of strawberry ice cream.

Pancakes are most commonly recognized as a breakfast and brunch dish in America and Canada. They’ve been around for centuries, a staple in many cultural diets.

Pancakes began over 30,000 years ago during the Stone Age. Culinary historians have found pancakes in the stomach of Otzi the Iceman, human remains dating back 5,300 years.

In ancient Greece and Rome, pancakes were made from wheat flour, olive oil, honey, and curdled milk. Ancient Greek poets, Cratinus and Magnes wrote about pancakes in their poetry. Shakespeare even mentions them in his famous plays. During the English Renaissance pancakes were flavoured with spices, rosewater, sherry, and apples.

Brunch this morning at the cottage was a fluffy Strawberry Rhubarb Dutch Baby doused in maple syrup!

Early American pancakes were made with buckwheat or cornmeal. Thomas Jefferson loved them so much he sent a special recipe to his home town from the White House.

Today, families around the world enjoy a morning meal featuring stacked banana and cherry pancakes. You can find both sweet and savoury pancakes all over the world, from spicy Vietnamese crepes to fluffy Strawberry Dutch Baby.

What Is a Dutch Baby?

Compared to a typical pancake, a Dutch Baby is baked in the oven in a cast-iron skillet, rather than fried on both sides over a griddle or stove. It is generally thicker than most pancakes and contains no leavening agents like baking powder or baking soda.

Dutch Baby batter is thin like crepe batter, rather than thick like traditional American flapjacks. The German pancake rises in a very hot oven thanks to the recipes egg content.

The idea of a Dutch Baby is said to have been derived from the German Pfannkuchen, but the current form originated in the US in the early 1900s.

According to Sunset Magazine, Dutch Babies were introduced in the first half of the 1900s at Manca’s Cafe, a family restaurant in Seattle. While these pancakes are derived from the German pancake dish, it is said that the name Dutch Baby was coined by one of the owners daughter, where “Dutch” was her corruption of the German autonym “deutsch.” Manca’s Cafe claimed that it owned the trademark for the Dutch Baby in 1942.

We love making pancakes and crepes at home.

This homemade Rhubarb Strawberry Dutch Baby recipe is a quick & easy recipe to make for your family during breakfast or brunch.

Tired of standing over a griddle in the morning to flip endless stacks of pancakes? You can make our Dutch Baby recipe in a flash, simply pouring the batter from your blender into a buttered skillet and baking it in the oven.

Strawberry Dutch Baby are crispy and browned on the outside and when cooked to perfection feature a light and fluffy interior.

The first time I tasted a Dutch Baby was on a California road trip with my dad at a popular brunch restaurant in San Diego.

The restaurant’s signature dish was a Dutch Baby topped with sliced Granny Smith apples and drizzled in caramel sauce. Guests were advised at the table that the dish takes 30 minutes to prepare from scratch. It seemed like everyone was more than happy to patiently wait, it was that good!

My family enjoys eating this Dutch Baby recipe year round. We get creative with the fruit pairings, being sure to use fresh fruit that reflects what’s in season at local farms.

My family loves to eat German pancakes all year round. Strawberry and rhubarb are a perfect pairing in the summer. We also like to serve the pancake topped with Niagara cherries and peaches in July and August.

In the Fall, serve this Dutch Baby by swapping out the strawberries and rhubarb with sliced apples and pears.

If it’s your first time making a Strawberry Dutch Baby take note of these baking tips:

What To Serve With Strawberry Dutch Baby

Dutch Baby are traditionally served with a squeeze of lemon, dab of butter, sprinkling of powdered sugar or maple syrup.

You can easily transform your favourite breakfast Dutch Baby recipe into a dessert by serving each slice alongside a scoop of ice cream, gelato or sorbet.

We like to serve this Rhubarb Strawberry Dutch Baby with maple syrup, sliced strawberries, lemon gelato or strawberry sorbet.

If you’re making a Dutch Baby in the Fall or Winter with pears and apples, feel free to drizzle with caramel sauce and top with chopped roasted walnuts, pecans or hazelnuts.

You can add flavourings to the batter such as almond extract, which pairs nicely with cherries and peaches. During the holidays we like to enjoy a boozy breakfast by adding a few teaspoons of Baileys or Eggnog to the batter.

The pancake will deflate once out of the oven but leftovers can be enjoyed by reheating in a toaster or oven. Don’t microwave leftover Dutch Baby slices you’ll miss out on the desired crispy and crunchy texture.

Store leftover Strawberry Dutch Baby slices in an airtight container or resealable bag in the fridge for 2-3 days. 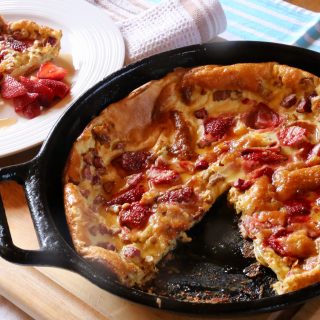