Looking to learn how to make the best homemade Chicken Shahi Korma?

We’ve traveled throughout India and love to recreate our favourite dishes at home. Popular Indian dishes like Shahi Korma are a quick and affordable gluten free dinner idea.

This creamy curry recipe can be made in less than an hour and features paneer, chicken, cashews, cream, yogurt and spices. Serve with yogurt, chutney and naan bread or basmati rice.

Travel to India by Cooking Shahi Korma at Home

After my contract ended in Seoul I travelled throughout Asia for 6 months, visiting the Philippines, Indonesia, Malaysia, Singapore, Cambodia, Laos, Myanmar, Thailand, Vietnam, The Maldives and India.

I spent over a month traveling through India. I started in the capital, eating my way through the bustling markets and fine dining restaurants in Delhi. I then embarked on a magical weekend getaway to awe-inspiring Taj Mahal in Agra. In India’s north you’ll find plenty of barbecue as wheat based side dishes like scorched naan bread.

For the second half of my Indian adventured I explored the southern state of Kerala. The south is famous for its seafood, coconut, tropical fruits and rice based side dishes like crispy dosa. The colonial capital of Cochin was formerly run by the Portuguese. It’s also one of the only places in India you can find beef on a menu.

My India trip came to a close in the Bollywood capital, bustling and cosmopolitan Mumbai. The city is famous for its specialty street foods and fine dining restaurants at opulent luxury hotels. The Taj Mahal Palace in particular serves one of the world’s most famous afternoon teas.

What I found most fascinating is India’s distinct regional food cultures. Much like the regional cuisines found in France, Germany, Italy or Spain, each city in India had its own local speciality.

Where To Eat Shahi Korma

If you live in a large city in Canada or America you’ll likely have access to a local Indian restaurants that serve traditional Shahi Korma.

Haven’t traveled to India before? It may be helpful to first sample Chicken Shahi Korma at a local Indian restaurant to better understand how the dish is served. You can also assess the thickness of the recipe and sample the correct texture before trying to make it at home from scratch.

What Is Shahi Korma?

Shahi Korma is a preparation of Indian cottage cheese and chicken consisting of a thick gravy of yogurt, cream, nuts and Indian spices. Some Shahi Korma recipes include tomatoes so the sauce can appear rose red. Many variations of Korma can be enjoyed across India, tweaked based on regional and family preferences.

A korma is defined as a dish where meat or vegetables are braised with yogurt, cream and broth. The flavour of a korma is based on a mixture of spices, including ground coriander and cumin, combined with yogurt kept below curdling temperature and incorporated slowly and carefully with the meat juices. Traditionally, it would have been cooked in a pot over a low fire. A korma can be mildly spiced or very hot and may use lamb, goat, chicken, beef or game.

Historically, kormas were prepared in the Mughal court kitchens, such as the famous white korma, perhaps garnished with vark, said to have been served to Shah Jahan and his guests at the inauguration of the Taj Mahal in Agra.

What To Eat With Korma?

The word paneer is derived from the Persian word for cheese, and shahi is the term for royal, in reference to the Imperial Court of the Mughal Empire. If you ever see “shahi” described on an Indian menu it harks to decadent dishes enjoyed by royalty.

Paneer and Chicken Shahi Korma is most commonly eaten with traditional Indian flat-breads like roti, naan or rice. If you’re preparing an Indian feast with vegetarian friends at the table we suggest also serving your favourite sautéed vegetables in Tikka Masala sauce, spicy dahls or Shahi Paneer.

Serve a portion of Shahi Korma on each plate with yogurt, chutney, cilantro and naan.

Ready to cook our homemade Shahi Korma recipe? We suggest reading the recipe directions in detail to ensure you understand the step by step process.

The total time to make our Shahi Korma recipe is less than an hour. You can easily prepare the dish in advance to make entertaining easy. Prepare the sauce in the morning or afternoon and simply add a little water or chicken stock to the korma gravy when reheating to ensure it is the desired thickness.

Before cooking the Korma we suggest setting the table with small bowls filled with creamy yogurt, sweet chutney, fresh coriander and sliced naan bread or roti.

We use skinless and boneless chicken thighs for this recipe as they tenderize nicely while braising and are full of flavour. You can substitute for chicken breasts if that’s what you prefer.

You can easily purchase prepared paneer at your local Indian market or grocery store (which is typically sold near tofu as it’s refrigerated). If you love to prepare dishes from scratch, try making homemade paneer, it’s surprisingly easy. All you need is whole milk, lemon juice or vinegar, cheese cloth and a large bowl.

Making homemade paneer is a great lesson for kids. It feels like a science experiment as they watch the casein in the milk coagulate into a fresh cheese. It’s a fun activity for families looking to roll up their sleeves and enjoy a hands on cooking experience.

How To Make Chicken Shahi Korma 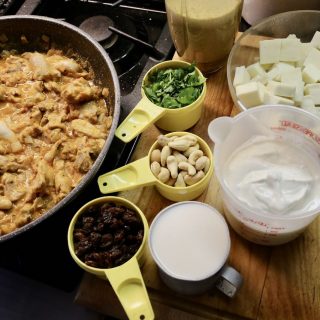