Looking for the the best homemade Szechuan Hot and Sour Soup recipe?

Our quick & easy Szechuan Hot and Sour Soup recipe, also known as Suan La Tang, is a perfect lunch or dinner idea for a cold Fall or Winter day.

The eye-catching dish stands out thanks to the luscious egg “flower” ribbons that float through this thick and flavour soup.

Travel to China by Cooking Szechuan Soup at Home

In Hong Kong, Macau and Taiwan, I’ve slurped through steaming bowls of traditional Szechuan Soup at restaurants and food markets.

In the Sichuan area, hot and sour soup is called as Suan La Tang which is usually prepared with chicken and pork stock. In the Northern areas, locals call the dish Hu La Tang and is typically made with beef or lamb stock.

After enjoying your first few sips, you’ll realize why a steaming bowl of Szechuan Hot and Sour Soup is a must-try when visiting East Asia.

Where To Eat Authentic Szechuan Hot and Sour Soup

If you live in a large city in Canada or America you’ll likely have access to a local Chinese restaurant that serves their own Szechuan Hot and Sour Soup recipe.

Haven’t traveled to Asia before? It may be helpful to first sample traditional Szechuan Soup at a local restaurant to better understand how it is served. You’ll get an idea for the ideal spice level, amount of vegetables to serve in each bowl and best garnish ideas.

Mushrooms, ginger, carrot, cilantro and green onions are available in abundance year round in Canada but we especially love to serve this savoury soup during Thanksgiving and the chilly winter season.

The best Szechuan Soup is full of hearty ingredients. The simple and spicy Hot and Sour Soup is a great way to incorporate nutritious ingredients into your diet during the colder months of the year.

Our Szechuan Hot and Sour Soup recipe is packed full of healthy ingredients!

Green Onions are a humble vegetable packed with vitamins, minerals and phytochemicals. Regular consumption of onions can help boost digestive health and reduce the risk of developing heart disease.

Tofu is a good source of protein and contains all nine essential amino acids. It is also a valuable plant source of iron and calcium and the minerals manganese and phosphorous.

This healthy Szechuan Soup is quick and easy to make at home. We’ve included a few tips for first time soup makers!

What To Serve with Szechuan Soup

If you’re hosting a large dinner party you might want to serve our easy Szechuan Soup as an appetizer before serving heartier mains.

If you have leftover Szechuan Soup you can store it in the fridge in an airtight container for up to a week. To reheat simply zap it in the microwave or simmer in a small saucepan on the stove.

How To Make Szechuan Hot and Sour Soup 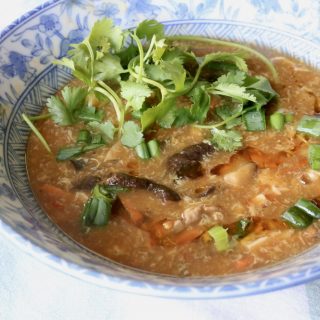