Pork Rouladen are one of Germany’s most famous and delicious dishes.

The popular German entree features thin pork cutlets stuffed with bacon, apple, onion, mustard and pickles. They’re wrapped into bundles, held together with toothpicks then fried on the stove.

We suggest serving our traditional Pork Rouladen with a rich and comforting gravy alongside plump German dumplings.

Our authentic Pork Rouladen recipe is easy to make, ready to serve in under 2 hours. It features flavours like smoked bacon, onion, mustard, apples and pickles.

Rouladen, also known as Rinderrouladen is a German meat dish, usually consisting of bacon, onions, mustard and pickles wrapped in thinly sliced beef or pork, which is then cooked. The dish is also considered traditional in the Upper Silesia region of Poland and in the Czech Republic.

Originally considered a simple dish for common people, today it is enjoyed by many Germans as a festive and celebratory dish, especially Sunday dinners and Christmas Eve.

Beef, veal or pork is typically used, though some food historians believe that the original recipe was probably venison.

While rouladen fillings vary from region to region, the hearty dish is almost always served for dinner. Red wine is often used to create a rich gravy that is poured over plump potato or bread dumplings.

Travel to Germany by Cooking Pork Rouladen at Home

For over ten years, I’ve been on the hunt for the best Pork Rouladen recipe. I’ve embarked on culinary adventures at German restaurants throughout Western Europe in Holland, Belgium, Luxembourg, France, Switzerland and Austria.

The first time I ever ate Pork Rouladen was during a memorable first meal in Munich. An oversized plate arrived at my table featuring gravy smothered pork parcels, fermented pickles and two plump German Potato Dumplings.

I hadn’t seen Pork Rouladen on menus in Berlin so was delighted to encounter the classic German dish in Bavaria. I enjoyed them with a swig of fresh beer and ordered them whenever I could while galavanting through Germany.

After you’ve enjoyed your first taste, you’ll realize why Pork Rouladen are a must-try when visiting Germany!

Where To Eat Authentic Pork Rouladen

If you live in a large city in Canada or America you’ll likely have access to a local German restaurant that serves traditional Pork Rouladen.

Haven’t traveled to Germany before? It may be helpful to first sample traditional Pork Rouladen at a local restaurant to better understand how the entree is served. You’ll get an idea of how large to roll your pork parcels, what fillings to use and how much gravy to pour on each plate.

My family loves carb-heavy feasts. Many of our favourite dishes are pasta, polenta, dumplings and homemade pierogies.

After traveling to Germany, Switzerland and Austria several times I decided to treat my parents to a traditional German feast featuring homemade Pork Rouladen with plump potato and bread dumplings.

I knew my parents would love the popular German main dish because they both love bacon, apples, pickles, mustard, fried onions and gravy.

I like to serve Pork Rouladen during the colder months of the year in the fall and winter. There’s honestly nothing more comforting after shoveling snow during a blizzard then slicing into a plump pork bundle swimming in rich gravy.

Our Pork Rouladen recipe is packed full of healthy ingredients!

A useful source of vitamins C, K and B6, apples support your immune, skeletal, and circulatory systems. Phytochemicals in apples may also keep your eyes healthy and help reduce bad cholesterol.

This homemade German stuffed pork is quick and easy to make at home. We’ve included a few tips:

What To Serve with German Stuffed Pork

The first time I ever served Pork Rouladen to my family was at Christmas. I served the stuffed pork parcels with bread dumplings, potato dumplings, roasted vegetables and a kale salad.

If you don’t want to fuss over making homemade German dumplings you can serve this recipe with mashed potatoes and braised cabbage.

After dinner why not dazzle your guests with one of our popular desserts such as Oat Flour Cookies with Chocolate Chips, Dark Chocolate Lindt Lindor Cookies, Maraschino Cherry Cupcakes Recipe, Cinnamon Babka For Chocolate Lovers or Black Forest Pancakes.

If you have leftover rouladen you can store them in the fridge in an airtight container for 3-4 days. To reheat, simply zap them in the microwave or roast in the oven.

They also freeze well, so I like to often double the recipe, cook them, freeze them separated on cookie sheets, and then transfer them to ziplock freezer bags. When you want to eat them later, all you have to do is thaw and reheat them in the microwave.

How To Make Traditional Pork Rouladen 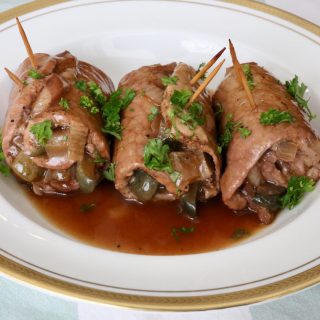