The popular German soup recipe originated in the region of Schwaben and is made of thin savory pancakes flavoured with fresh herbs. It is quick and easy to make, ready to serve in under an hour.

Travel to Germany by Cooking Fladlesuppe Pancake Soup at Home

For over ten years, I’ve been on the hunt for the best German Pancake Soup recipe. I’ve embarked on culinary adventures at German restaurants throughout Western Europe in Holland, Belgium, Luxembourg, France, Switzerland and Austria.

Flädle is a southern German dish from the region of Schwaben, derived from savoury pancakes. In neighbouring Austria, Flädle is called Frittaten; the word frittaten is derived from the Italian frittata (frying).

The Flädle are made as thin, crepe-style pancakes known as palatschinken, that are tightly rolled up and sliced into spiralling coils. They are usually served in a clear beef broth, known together as Flädlessuppe.

After you’ve enjoyed your first few sips, you’ll realize why a steaming bowl of authentic Fladlesuppe is a must-try when visiting Germany!

If you live in a large city in Canada or America you’ll likely have access to a local German restaurant that serves traditional Fladlesuppe.

Haven’t traveled to Germany before? It may be helpful to first sample traditional Fladlesuppe at a local restaurant to better understand how the soup is served. You’ll get an idea of how many sliced pancakes to add to each bowl and the desired herb aroma and flavour. You’ll also find inspiration on what to pair with Pancake Soup including Sauerbraten, Schweinshaxe, Rinderroulade, Kartoffelpuffer and Kartoffelkloesse.

Carrot, celery, parsley, leek and chives are available in abundance year round in Canada but we especially love to serve this savoury soup during Thanksgiving and the chilly winter season.

The best German Soup with pancakes is full of fragrant herbs and rich onion flavour thanks to chives, scallions and leek. The simple and restorative beef broth incorporates nutritious ingredients into your diet during the colder months of the year.

Our German Soup recipe is packed full of healthy ingredients!

This healthy German Soup with fresh herb pancakes is quick and easy to make at home. We’ve included a few tips for first time soup makers!

What To Serve with German Pancake Soup

If you have leftover German Soup you can store it in the fridge in an airtight container for up to a week. To reheat simply zap it in the microwave or simmer in a small saucepan on the stove. 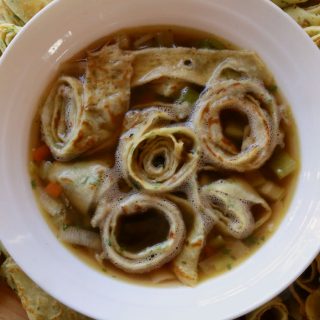