Homemade pierogies are Poland’s most iconic comfort food. The popular Central European dumplings are a kitchen staple in Poland, Ukraine and Russia.

They can also be found on restaurant menus in neighbourhoods that play home to large Polish immigrant communities. Roncesvalles Polish Fest in Toronto serves thousands every September, while Saskatoon is home to Canada’s only pierogi drive thru!

What is a Pierogi?

Homemade pierogies are filled dumplings that are made by wrapping unleavened dough around a savoury or sweet filling and cooked in boiling water. They are considered Poland’s national dish, often served at festivals and special family gatherings.

The Origin of Pierogies

The origin of the pierogi is disputed as dumplings have been popularized around the world for thousands of years. Some legends say that the original pierogi recipe came from China through Italy via Marco Polo’s expeditions. Other backstories contend that the pierogi was brought to Poland by Saint Hyacinth from Kiev, Ukraine. Yet another tasty tale holds that pierogi arrived thanks to the Tatars from the former Russian Empire. The exact origins may never be known, but we’re certain that an easy recipe for homemade pierogies is worth passing on.

Maria Rozynska is the owner of Just Be Cooking in Toronto, a hands on culinary school that offers classes in a variety of cuisines such as Korean, French, Turkish and Polish. Maria explains her family’s move from Warsaw to Canada, “During the dark communist years, my family escaped Poland. We could tell no one of our plan. We just walked out the door one morning and split up. I went with my father and my brother went with my mother as travelling families were viewed with suspicion. Our destination was a refugee camp in Southern Italy. We arrived to Toronto one year later in 1985.”

Maria fell in love with cooking at the age of 5. It was during her time in Italy when housed in a hotel with other Polish families that she noticed they kept their culture alive through the food they ate together. She credits her grandmother and mother for teaching her to make homemade pierogies. They taught her tips and tricks, which she now passes on to the students in her Polish cooking classes.

Just Be Cooking isn’t just a cooking class, Maria ensures students leave having enjoyed an immersive cultural experience. She achieves this by sharing the history of each dish as its prepared. Each workshop ends with a communal meal. Hungry students get to eat their own creations while enjoying live music from a local Polish folk band.

Maria Rozynska’s pierogi recipe yields approximately 80 dumplings. Her recipe for homemade pierogies consists of two tasks: preparing the pierogi dough and mixing together the pierogi filling. Traditional Polish pierogi can be served with a variety of fillings. The most common pierogi filling is potato and cheese, which we’ll outline here. You’ll find a list of other popular fillings at the end of this story. 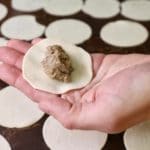 What to Serve with Homemade Pierogies?

Pierogi can be enjoyed in a myriad of ways. Minimalists snack on homemade pierogies straight out of the pot. Traditionalists serve Polish pierogies fried in butter and topped with caramelized onions and sour cream. I’ve also enjoyed pierogies served as dumplings in soup or swimming in a rich mushroom and dill cream.

If you’re hosting a pierogie feast for friends you’ll want to serve other Polish dishes at the table. Popular Polish side dishes include beet salad, cucumber salad, cabbage rolls, smoked fish and kielbasa.

Other Fillings for Homemade Pierogies

Mastered the art of preparing homemade pierogies with the classic potato and cheese filling? Why not surprise your guests with pierogies that offer a variety of flavours and textures.

Can You Freeze Homemade Pierogies?

Once you’ve finished sealing the pierogies you may want to cook half of them now and save the others to eat later. Homemade pierogies can be frozen for up to 3 months. Make sure to lightly toss your pierogies in flour before storing them in the freezer. The thin coating of flour on each pierogi ensures they don’t stick together. You do not need to thaw frozen homemade pierogies before cooking them. Just boil them straight from the freezer!