Yogurt Corbasi is one of our favourite creamy vegetarian soups to cook at home.

Our homemade Yogurt Corbasi recipe, also known as Yayla çorbası and Turkish Yogurt Soup, is quick and easy to make, ready to serve in under 40 minutes!

Known to locals as Yayla çorbası or yoğurtlu çorba, yogurt soup is a popular Turkish meal. It is a yogurt soup cooked with a variety of herbs, rice, and sometimes chickpeas. Sometimes the yogurt is subsituted for homemade labneh.

Many culinary historians believe the origins of Yogurt Corbasi can be traced back to the Assyrians. Today the yogurt soup is enjoyed across Turkey but it’s most associated with the region of Anatolia.

In Turkey the soup is typically served in the colder winter months. Since the soup is dairy-heavy it’s a filling and hearty soup, generally consumed in the more mountainous regions in the country where cattle graze.

Its name literally translates to “mountain soup”. It can also be found on the menu at many Turkish weddings. When a steaming bowl of Turkish Yogurt Mint Soup is placed in front of you there’s reason for celebration!

Travel to Turkey by Making Yogurt Corbasi at Home

For over ten years, I’ve been on the hunt for the best Yogurt Corbasi recipe via adventures that had me zig-zagging through Morocco, Turkey, Egypt, Jordan, Israel and Dubai.

My fondest memories spooning through bowls of Yogurt Corbasi were at celebratory Turkish feasts in the cave town of Goreme, beach break in Bodrum, ancient city of Ephesus and a culinary walking tour of Istanbul.

Where To Eat Yogurt Corbasi

If you live in a large city in Canada or America you’ll likely have access to a local Middle Eastern restaurant that serves an authentic Yogurt Corbasi.

Haven’t traveled to Turkey before? It may be helpful to first sample Yogurt Corbasi at a local restaurant to better understand how the dish is served. You’ll get an idea for the desired thickness of the broth, intensity of mint flavour and ideal proportion of rice or chickpeas to add.

Eggs, butter, yogurt, and mint are available in abundance year round in Canada but we especially love to serve this savoury soup in the Fall at Thanksgiving or the colder months throughout the winter.

Yogurt Corbasi is a healthy meat-free soup popular with vegetarians.

Traditional recipes are not vegan friendly as egg, butter and of course yogurt are required to make this creamy Turkish soup.

Our Yogurt Corbasi recipe is packed full of healthy ingredients!

Packed with calcium and friendly probiotic bacteria, yogurt help keep your bones strong and your gut healthy. Yogurt may also help reduce the risk of obesity, diabetes and some types of cancer.

Fresh mint is antioxidant and anti-inflammatory, and can have a calming effect on the digestive system. It is also a good source of folate, which supports blood health.

This healthy homemade soup recipe is quick and easy to make at home. We’ve included a few tips for first time soup makers!

What To Serve with Turkish Yogurt Mint Soup

We most often serve Turkish Yogurt Soup as a hearty lunch. If you’re hosting a large dinner party you might want to serve our Yogurt Corbasi as a small portioned appetizer before serving heartier mains. 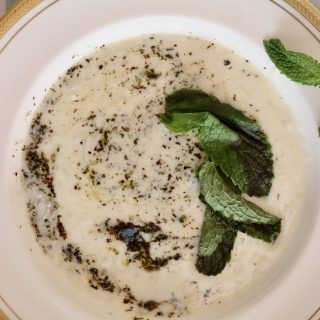