Looking to learn how to make the the best homemade Hokkien Mee recipe?

What Is Hokkien Mee Soup?

Hokkien Hae Mee is a Malaysian prawn and pork soup popularly served at hawker stalls or street food vendors. The healthy Prawn Noodle Soup originated in the tropical island of Penang, where it is simply known as Hokkien Mee.

The flavourful soup indigenous to Penang is now popular throughout Malaysia. As the name suggests, the soup finds its culinary roots in the maritime Hokkien (Fujianese) cities in China and Taiwan, acquiring its spicy flavour in the tropics.

In 2008 I spent a month backpacking through Malaysia, visiting wild Orangutans in Borneo, scuba diving Sipidan, exploring Kota Kinabalu and Kuching, eating my way through Penang, strolling the tea fields of the Cameron Highlands and wining and dining in cosmopolitan Kuala Lumpur.

Later in 2018 as a travel journalist I had the opportunity to return to Malaysia to visit The Andaman Langkawi and Four Seasons Resort Langkawi. I discovered there are plenty of things to do on Langkawi. Malaysia’s famous tropical island offers museums, jaw-dropping lookouts, unique wildlife experiences and a bustling local food market.

What I found most fascinating is Malaysia’s distinct regional food cultures. Much like the regional cuisines found in France, Germany, Italy or Spain, each destination in Malaysia had its own local speciality.

Penang is known for having an obsessive food culture. Its unique location offers a muddling of fresh Southeast Asian flavours thanks to its proximity to Singapore, Thailand and Indonesia.

The island of Penang is famous for its food scene. The capital, George Town, offers restaurants serving indigenous Malay specialities as well as succulent savoury dishes in bustling Chinatown and Little India. Penang’s food scene is directly linked to its immigrant history, and the flavours here are reminiscent of what you’ll find in the hawker stalls in Singapore.

I spent 3 days eating my way through Penang’s most famous regional dishes. A local chef encouraged me to find a steaming bowl of the islands iconic Hokkien Mee Soup.

After slurping through a big bowl of spicy Prawn Noodle Soup I was officially hooked on Penang’s flavourful food scene.

If you live in a large city in Canada or America you’ll likely have access to a local Malaysian restaurants that serve traditional Hokkien Mee Soup.

Haven’t traveled to Malaysia before? It may be helpful to first sample Prawn Noodle Soup at a local Malaysian restaurant to better understand how the dish is served. You can also assess the noodle to broth ratio, takes notes on the perfect garnishes and determine the perfect spicy heat level before trying to make it at home.

In Toronto, popular Malaysian restaurants that may serve a traditional Hokkien Mee recipe include Soos on Ossington, Gourmet Malaysia in Scarborough and Restoran Malaysia near Markham.

Garlic, onion, spinach, spices, pork and fresh seafood are available in abundance year round in Canada but we especially love to serve this spicy soup during the chilly winter season.

The best Prawn Noodle Soup is full of hearty ingredients. This quick and easy Hokkien Mee recipe is a great way to incorporate nutritious ingredients into your diet during the colder months of the year.

Seafood is a high-protein food that is low in calories, total fat, and saturated fat. High in vitamins and minerals, seafood has been shown to have numerous health benefits including decreasing the risk of heart attack, stroke, obesity, and hypertension.

This healthy Prawn Noodle Soup is quick and easy to make at home. We’ve included a few tips for first time soup makers!

What To Serve with Hokkien Mee Soup

If you’re hosting a large dinner party you might want to serve our easy Hokkien Mee recipe as an appetizer before serving heartier mains.

If you have leftover Hokkien Mee Soup you can store it in the fridge in an airtight container for 3-4 days. To reheat simply zap it in the microwave or simmer in a small saucepan on the stove. 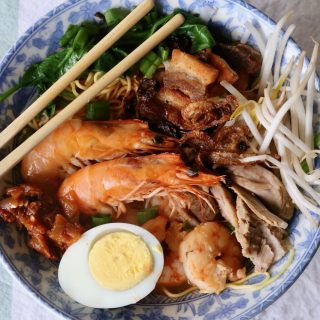