I suddenly woke up in Kuala Lumpur and realized the bus was stuck in bumper to bumper Christmas Day traffic. I peeled my face from the window and stared up at the city’s iconic Petronas Towers. I was dropped off at the bus station and found myself being chirped at by throngs of Indian cabbies. I told the first taxi driver that I needed a ride to the Traders Hotel. The first driver told me it would cost 40RM for the ride. The price seemed a bit steep so I continued to walk along the street. I stopped a group of local girls and asked them how much it should cost me to get there. They said I should pay no more than 20RM to get to the hotel.

A few minutes later another cabby asked me where I needed to go. I gave the name of my hotel and he responded, “50RM is a good price.” I looked at him in shock and said, “I know you are overcharging me. I don’t even have that much money on me!” He then asked me how much I was willing to pay and I said, “15RM.” He laughed in my face, pointed at his skin and said, “You are a rich white man.” Appalled I made a rather uproarious disgusted gesture and walked away. I grabbed my map of the city and made the decision to take the moral high road (and the health conscious transport method). 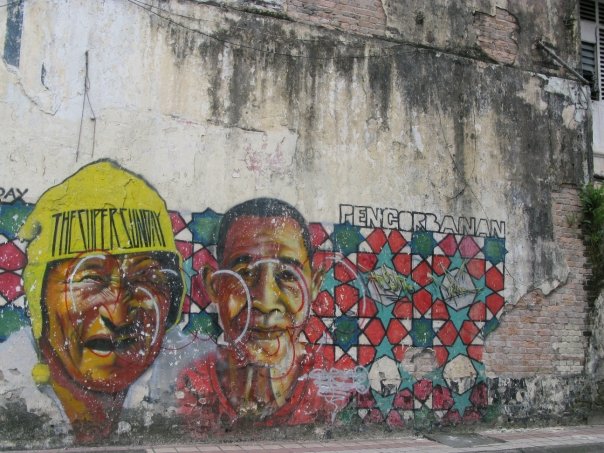 In the heat of midday I walked across the city, waving “no thank you,” to each taxi driver who approached me for a ride. The walk was a rather exhausting, sweat inducing haul which had me walking past crazy men with pythons around their neck, smiling hippies and streets covered in pedestrian shoppers.

I quickly realized my decision to walk rather than take a cab was a good one. I was walking twice as fast as the cars, buses and taxis that appeared to be parked on the main street. I studied how the locals crossed the street and my jaw dropped in disbelief. The streets were so jammed, the sidewalks so filled with people that cars and pedestrians alike did not even look up at the traffic lights. The general rule in KL is to watch where you are going and make a weaving dash through the maze of slowly moving vehicles. The cars constantly coast across the street and people just flood into the mess.

My shirt was soaking in sweat and my back was aching as the straps of by pack were digging into my shoulders. I walked into the main lobby of one of the nicest hotels in Malaysia looking like a hobo. I walked into the elevator and pressed the button for the 33rd Floor’s SkyBar. I threw my bag on the floor, slumped into a couch and told the waitress to announce my arrival. For the next few minutes, as I waited to meet my fellow classmate Iris Lam, I walked around the city’s most famous lounge. SkyBar is covered in floor to ceiling windows which offer the best view of the Petronas Towers. A petite swimming pool sits in the centre of the bar while guests lounge while sipping champagne in a quiet, calm and luxurious atmosphere above the chaotic streets bellow. 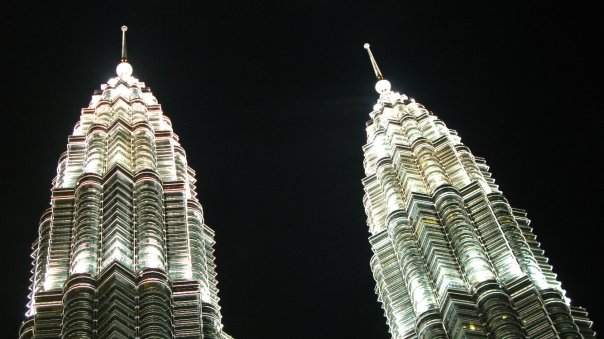 Iris and I both studied Hotel and Food Administration at the University of Guelph together. Iris manages SkyBar so it seemed like a fitting place to meet her just before she started work. We quickly said hello and grabbed my bags to take to a cab downstairs. She put me in a taxi and I zoomed through the city, arriving at her apartment building smack dab in the heart of the Golden Triangle. Her French room mate Cindy, from Lyon greeted me at the street and showed me to their apartment.

I poked my head out of the apartment window and realized I was located smack dab in the middle of the ritziest part of the city. Directly across the road is one of Kuala Lumpur’s other luxury hotels where I could see guests lounging beside a pool sipping on martinis.

Cindy and I walked down the trendy gastronomic lane, Changkat Bukit Bintang Street where we met up with Iris and her other French room mate from Dijon. We spent the next two hours enjoying a delicious Italian Christmas meal at Ciccio Restaurant. We started by nibbling plates of bruschetta while sipping from two bottles of Le Rine Pinot Grigio. I later devoured pumpkin stuffed ravioli with sage butter sauce and a classic Caesar salad and Margherita pizza. 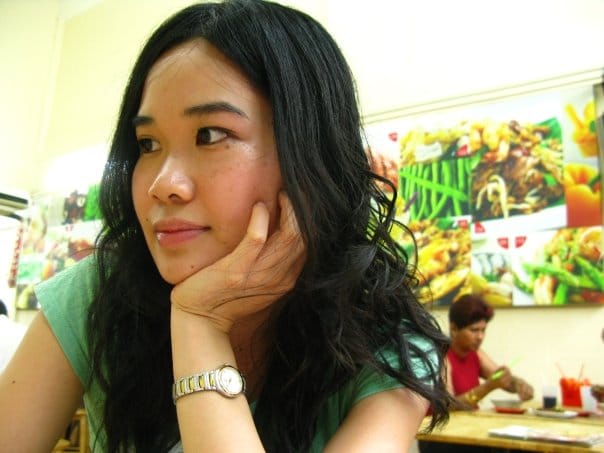 The following afternoon we enjoyed a cheap and cheerful lunch back at the KL’s famed Jalan Alor hawker food stall street. We sat at Cu Cha Chinese restaurant and gobbled up a bowl of steamed rice and three plates of BBQ Pork, roast duck and garlic tossed Hong Kong greens.

I spent the afternoon properly committing myself to the discovery of each and every nook and cranny at the Pavillion Shopping Centre. I strolled through fashion friendly Marc by Marc Jacobs, Top Shop, Prada, Hermes and Dior Homme and found myself softly caressing a cashmere sweater at Burberry when I suddenly realized how inappropriate it was that all of these designer stores were selling cozy sweaters and thick winter jackets. I called over an energetic employee and asked “who would purchase a cashmere sweater in a city that is hot and humid 365 days a year?” He answered, “Local Malaysian’s do not buy any of these clothes. Everyone that shops for these items are rich businessmen and tourists from Japan, Korea, China, Russia, the Middle East, Europe and North America.” I thought it must be kind of weird to know that every day when you go to work you have to try and sell a product that you yourself would never wear.

I passed by what seemed like hundreds of upscale eateries specializing in everything from Japanese Sushi, Spanish Tapas and French Bistro. I stood over a bridge on the top floor which gave me an amazing view of the entire open air complex. I stared four floors bellow and was delighted to see people chatting at an opulent Godiva Chocolate Café. 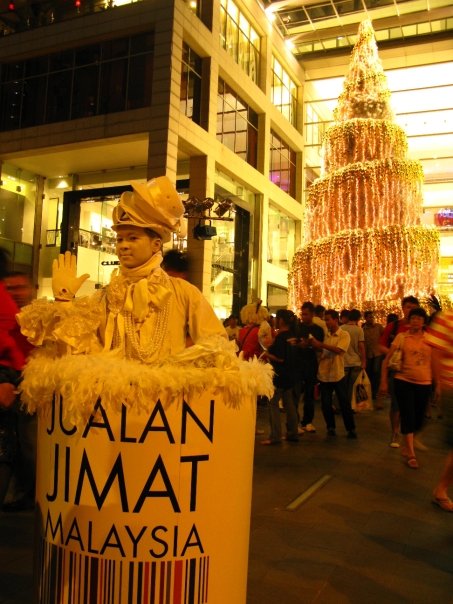 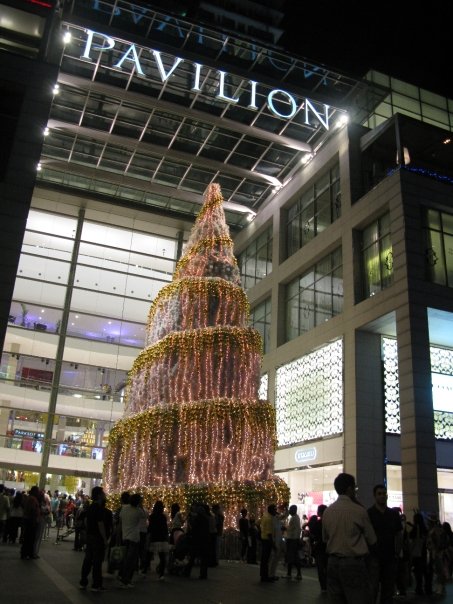 The following day I spent the afternoon lounging at the Pavillion’s impressive basement food court. I wasn’t surprised that the restaurant offerings were top notch seeing that the mall’s reputation is one of luxury. I walked through the entire bottom floor passing by tapanyaki grills, Korean BBQ, Indian tandoori, Japanese Sushi, Hong Kong dim sum, Thai, Vietnamese and Malay favourites. I stopped at a spot called Hong Kong Roasts which had a beautiful collection of glistening roast ducks hanging in the window. I ordered a crispy duck leg with steamed rice and chicken broth. The skin was crispy like a perfectly basted Christmas turkey and the meat fell off the bone. The duck was slathered in green onions and a sweet and tangy sauce. 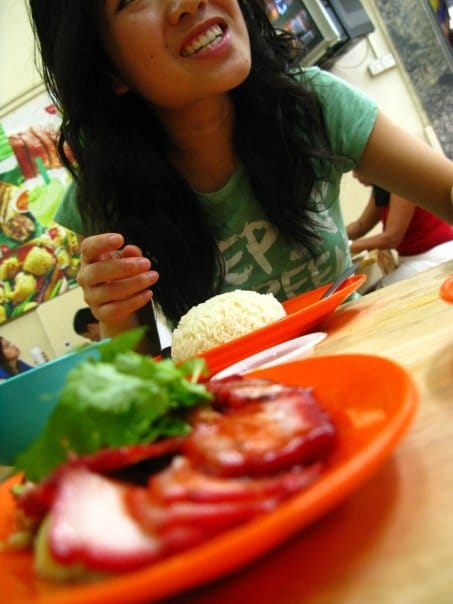 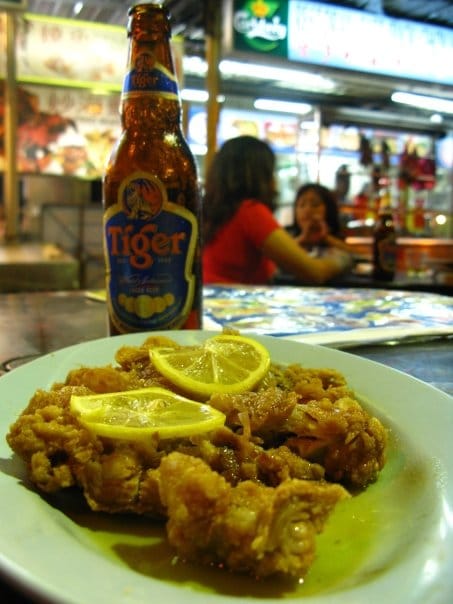 At 6pm I rushed back to the apartment to meet Cindy as Iris made a reservation at SkyBar for us at 8pm. That morning she had handed me a little packet full of free drink tickets for each of the SkyBar’s signature cocktails. As soon as we arrived Iris sat us right along the glass wall. I popped myself up on a bar stool and stared out at the two glowing twin towers. While flipping through the menu we nibbled on an addictive bowl of Cajun spiced sweet roasted cashews. Over the next two hours we sipped ourselves silly while feasting on Waygu Burger and a Grilled Haloumi Cheese sandwich stuffed with wild rocket and hummus.

The ambiance and vibe at the bar in the evening is really spectacular. The pool glows from beneath while a DJ plays low key lounge beats. The crowd is full of wealthy tourists: mostly European and Middle Eastern families spending their Christmas vacation in Malaysia. I couldn’t help but laugh as I watched waitresses strut down the central runway with platters of food and drinks over their heads. The deck sits directly over the pool and borders the cabana seating areas. I wondered how many times someone dressed from head to toe in Gucci or Versace has slipped into the pool after a few too many drinks. 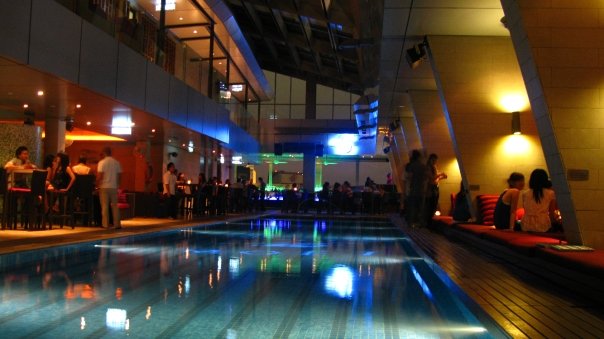 Iris was able to get off her shift early so we headed to KL’s nightlife hub. We ate a bit of steaming street food while sipping on vodka cran’s before heading downstairs into an energetic nightclub. After we had expended our prancing excitation we hopped in a cab to Juan Alor for some midnight hawker treats. We sat down at Iris’s fave Thai spot where we enjoyed a Green Thai Mango Salad, Chicken Fried Rice and a very hot bowl of Tom Yum soup. 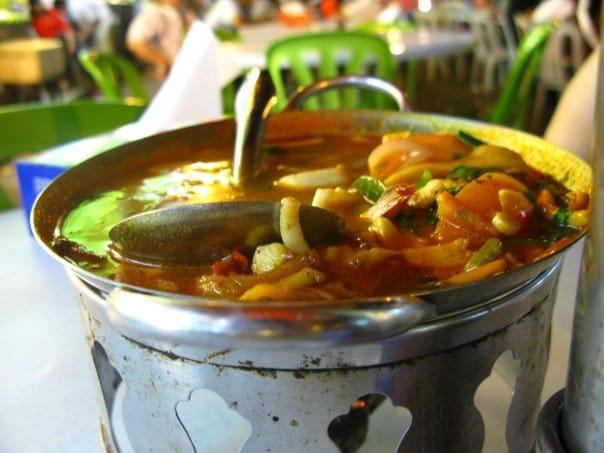 The following day we were shocked to realize that we had slept in until 2pm. We whipped ourselves into shape and readied ourselves for an action packed last day together. Our first stop was the Pavillion where we had a quick bite to eat at the cities famed Madame Kwan’s restaurant. The place was packed full of locals gobbling up the eateries famed Malay favourites. We both shared a plate of Nassi Lamak, the traditional Malay breakfast which consists of curried chicken, coconut rice, sardines, cucumber and boiled egg. 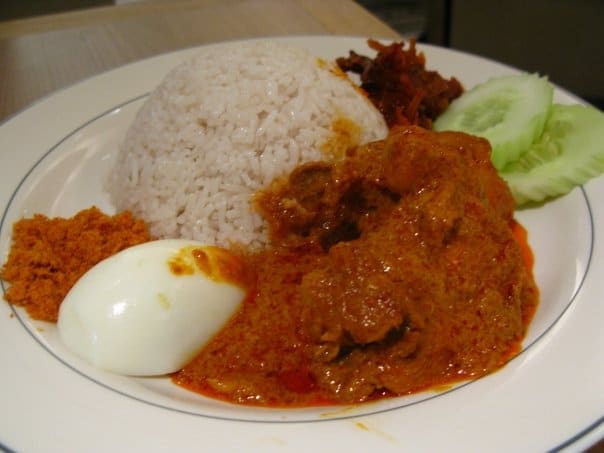 Next we hopped in a taxi and headed to Kuala Lumpur’s famous Batu Caves which are situated seven miles north of the capital. Hindu priests have used these caves as temples since their discovery in 1878. As we arrived at the caves we were greeted by a large gang of mischievous monkeys. 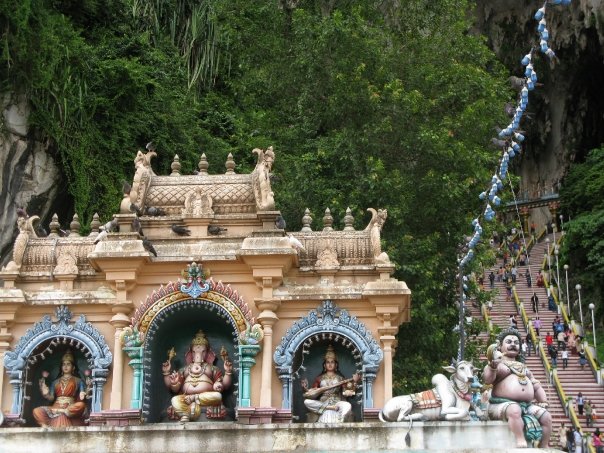 A long 272 step staircase leads up to the cave entrance. Directly to the right of the staircase stands a massive 43 meter tall golden statue of Murga, the highest in the world. Once a year the Thaipusam festival is held at the Batu Caves which is a celebration for the son of Shiva (Subramaniam) and the becoming “one” of Pusan and the Brihaspati stars. 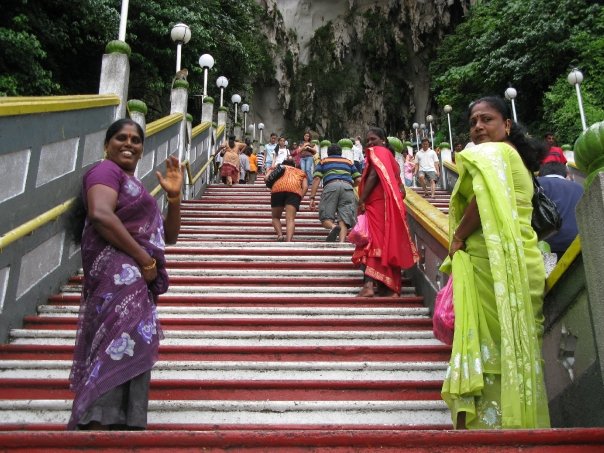 Every year the festival brings as many as one million devotees and other visitors which cover the staircase in brightly coloured sari’s and fill the air with incense. The festival is famous as devout Hindus skewer portable shrines to their bodies and carry them all the way from central KL. Iris and I climbed all the way to the top, stopping to wave and smile at group of 60 year old Indian woman who huffed and hobbled beside us. Once at the top we walked inside the cave and up to the main temple. I will never forget seeing the half naked Hindi priest who I am sure, without a doubt would win the award for world’s hairiest man. 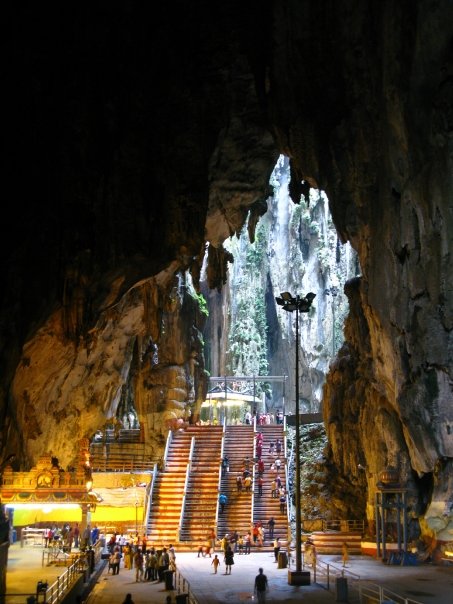 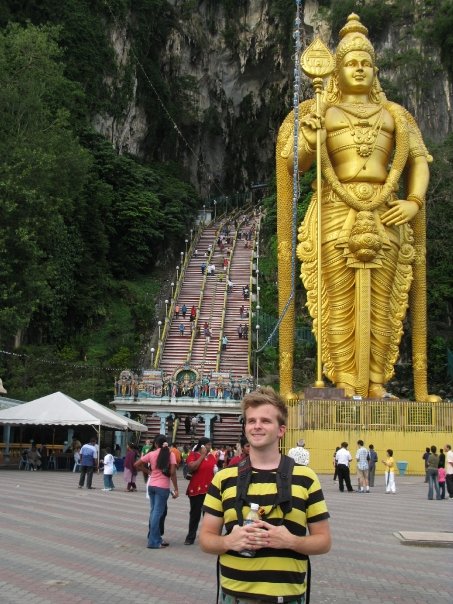