Arriving at Kota Kinabalu Airport one notices two things: a wave of hot humid air and the fact that you have arrived in a predominantly Muslim state. Women wear colourful head coverings and men dress in long shirts and tiny little top hats. Driving into town at night I was surprised to see massive brightly lit Christmas trees sparkling on the side of the street. I would soon find out that the province of Sabah is the most Christian region of the country with 40% of the population Catholic and 60% Muslim. 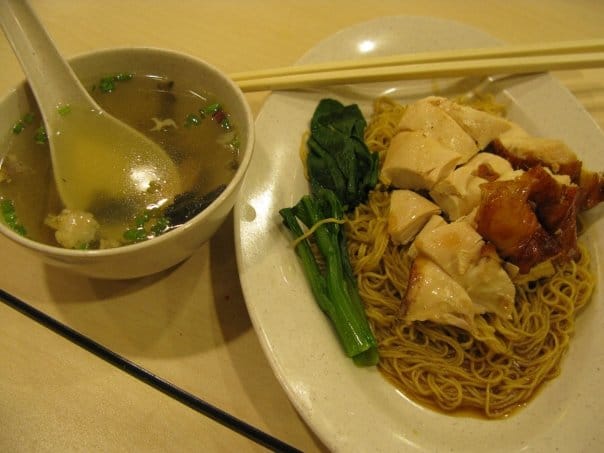 Many of the traditional food stalls were closed as I had arrived rather late at night but I did find an interesting spot called The Chicken and Rice Shop where I plopped down and flipped through the menu. The first thing I noticed upon entering the restaurant was a large sign which read We Serve No Pork followed by a Halal certificate. I ordered a plate of roast crispy chicken with fried noodles, spring rolls and an orange tropical fizzy drink. Malay food is known for its sweet and sour flavours and I was pleased to munch into my wet noodles with an interesting tang on my taste buds. 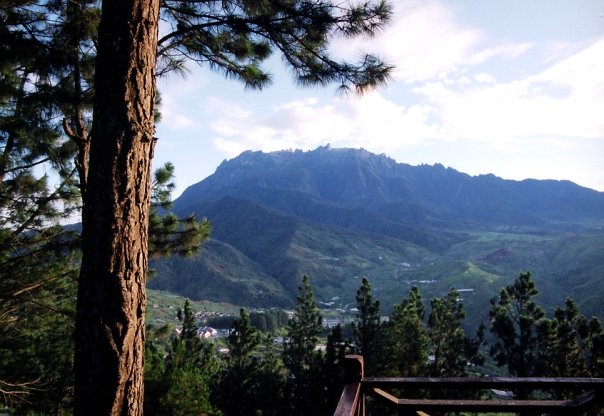 I woke up at the crack of dawn and quickly gobbled down a cup of coffee and a slice of fresh papaya. Half awake I walked through the empty streets of Kota Kinabalu to find the bus station. I found the mini bus headed to Mount Kinabalu National Park and squeezed into the last available seat. We drove along the cities waterfront and past several mosques where I saw many families wearing their best traditional dress for morning prayers. I had been told earlier in the day that it was a special Muslim holiday so everyone seemed to be out and about in the early morning. Once outside of the city we drove up a winding two lane jungle highway until we caught our first glimpse of the famous towering mountain. Minutes away from the Park entrance we found ourselves driving through thick cumulous cloud. Caught in a fog I hopped off the bus and hiked up a small hill at the base of the Park Office. 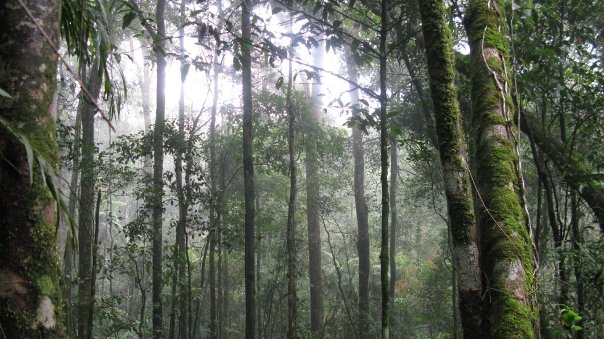 Mt. Kinabalu, the majestic summit of Borneo is the focal point of the whole of Sabah. The highest mountain between the Himalayas and the Snow Mountains of Papua Barat (New Guinea Island) this magnificent granite massif stands at 4,095 meters tall. The Kinabalu Park covers a staggering area of 754 square kilometres. Established as a state park in 1964, this botanical paradise is blessed with an astonishing variety of flora and fauna that ranges over four climate zones. Kinabalu Park is home to about 1,200 species of orchids, 26 species of rhododendrons, over 80 species of fig trees, over 60 species of oaks and chestnuts, 100 mammals and over 330 birds. 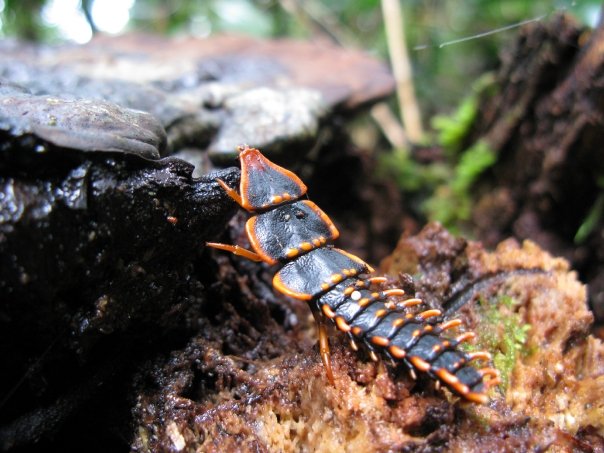 It was suggested that I hike the Kiau View Trail. Over the next two hours I hiked through beautiful jungle forests. Trees covered in moss, whispers of fog, hundreds of glistening spider webs, logs covered in colourful fungi and squirming tropical insects. The weather was very humid (I was technically walking through a cloud) and cool as I was scaling the side of a mountain. What I didn’t expect was the trails predominantly muddy nature. Most of the trails were full of peanut butter thick, pasty mud the colour of rust. 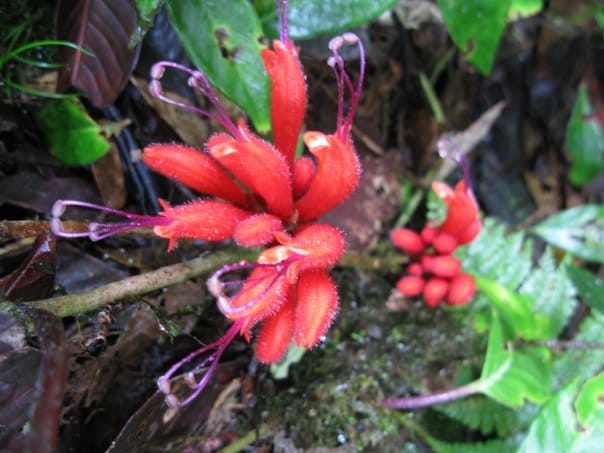 I realized a few things as I wandered through the trail. Avoid mud at all costs. At some points of the trail it was unavoidable so I had to just let my feet sink into the swamp while mud inched up my ankles. It was after a startling panic that I realized I had three leaches sucking the life out of my left foot. It also became clear that one needs to walk slowly through the forest to truly appreciate the 360 degree view. I would wind around the jungle path and stop, look down, look up, and look side to side. It became apparent that nature only reveals herself to those who press her closely. By slowly discovering the scenery I was able to find delicate pink flowers, brightly coloured insects and minuscule mushroom buds. I was a bit tense by the end of the hike as the humid air, itchy leach bites, exhausted legs and empty stomach had my squirming for an end. Twenty minutes before I reached the end of the trail I lost my good footing and crashed down a five meter slope. I slid in thick mud, grabbed a moss covered branch and pouted. I was covered in muck and could do nothing but look up into the sky and let out a brief scream followed by uncontrollable solitary laughter. 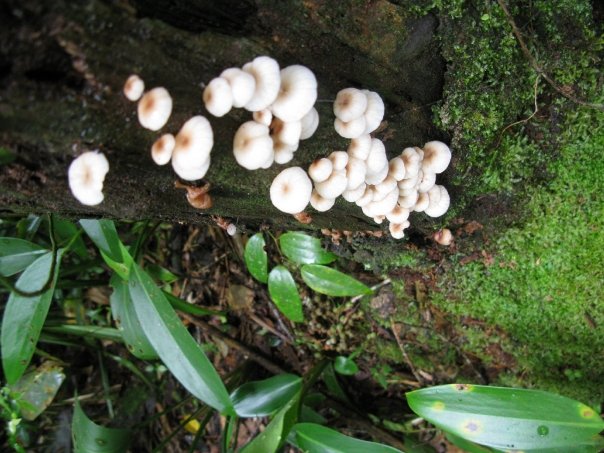 Exiting the trail I arrived at Balsam Café where a startled waitress took one look at me and ushered me over to an outdoor faucet where I spent the next several minutes scraping mud from my legs and shoes. Once I had cleaned myself up properly I spent the next two hours devouring an all you can eat Malaysian buffet. I first slurped a delicious bowl of hot wintermelon and chicken soup which featured huge buds of roasted garlic, ginger and was sprinkled with crispy fried onion. I filled a plate with Beef Rendang, lamb with black pepper curry, fried chicken, banana fritters and various sweet cakes. 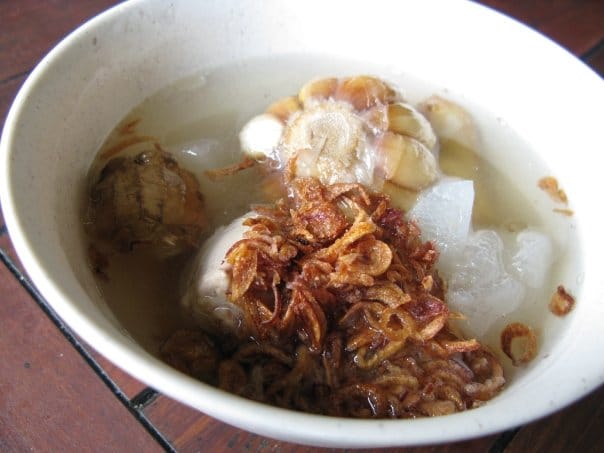 After lunch I rushed down the hill to the entrance of the park where I met two South Africans waiting for the bus. The three of us stuck out our fingers attempting to hitch hike. We couldn’t help but laugh as the local Muslims saw us attempting to hitchhike and threw their hands up in the air behind the steering wheel and laughed at us. Apparently the notion of a free ride here is laughable. My bus finally arrived and I hopped onto a window seat and spent the next five hours driving through palm forests, road side villages and bursts of tropical rainstorm before arriving in the city of Sandakan. 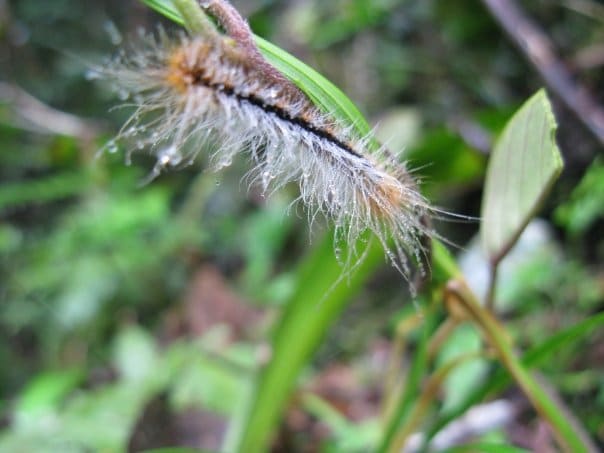 As we drove into the city I couldn’t help but notice that it was only 6pm and every store was closed. A young man sitting in front of me turned around and eagerly introduced himself. He explained that since it was a Muslim holiday shops were closed. He asked me what I was doing in Sandakan and I mentioned that I had no hotel reservation. At this news he insisted that he drive me to a hotel as it was dark and he felt the city could be dangerous for a foreigner like me to be walking around alone at night. He was incredibly generous, insisting that we stop off somewhere for me to grab a bite to eat. I decided to spend the night in the small town of Sepilok just outside of Sandakan. While driving through Sandakan one quickly realizes what the city is famous for. Hundreds of large monkey statues can be found along the main boulevard leading to the town of Sepilok. People from all over the world stop in Sandakan to visit the Sepilok Orangutan Rehabilitation Center. 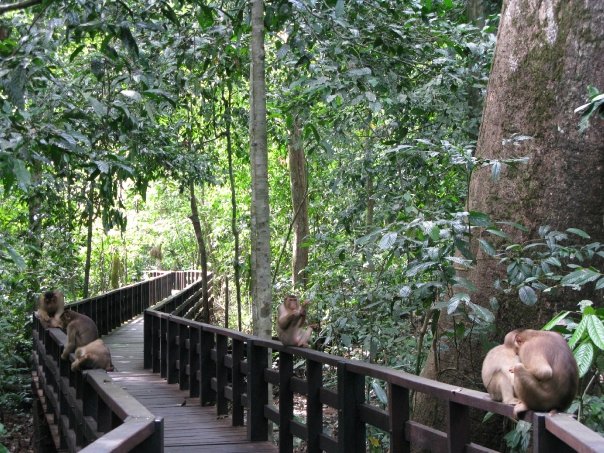 I arrived at Sepilok Jungle Resort and waved my generous driver goodbye. I spent the late evening sitting in the resort restaurant chatting with eight backpackers from the Netherlands. Flipping through the menu I was shocked at the price of beer. I was soon told that Malaysia does not produce any beer as it is a predominantly Muslim nation. All beer is imported and heavily taxed. When one becomes accustomed to paying 60 cents for a beer in the Philippines and is now forced to spend 4 dollars. It is indeed a bit of a shocker.

The Rehabilitation Center is a short five minute walk up the road. I bought my ticket and then spent the next thirty minutes watching an informative video on the history of the Center. The Sepilok Orangutan Rehabilitation Center was conceived in 1961 and by 1964 had become reality, funded by the Sabah Government and a British NGO. The aim of the organization is to return orphaned, injured or displaced orangutans back into the wild. Many orphans have successfully undergone the process of rehabilitation and have been released into the 4,394 hectare Kabili-Sepilok Forest, a virgin jungle reserve rich in tropical rainforest and mangrove swamp. 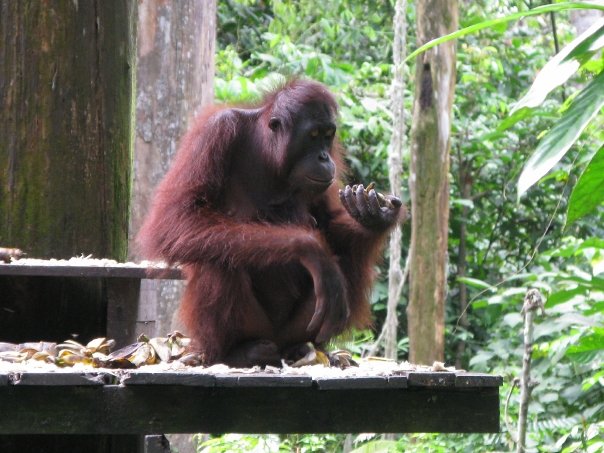 The rehabilitation process starts as soon as the orangutan is admitted to the center with a thorough health examination, followed by a quarantine period to eliminate transmittable diseases. Young orangutans spend time in the nursery learning skills essential to jungle life such as the ability to find food, build nests and even climbs, skills they would normally learn from their mother. Once ready they move to the Outdoor Nursery where their freedom is increased and their independence on food and emotional support is decreased. Visitors can witness part of the process by visiting Platform A where the natural forest diet of the orangutan is supplemented with milk and fruit. Eventually, most animals achieve total independence and become integrated into the Sepilok orangutan population. 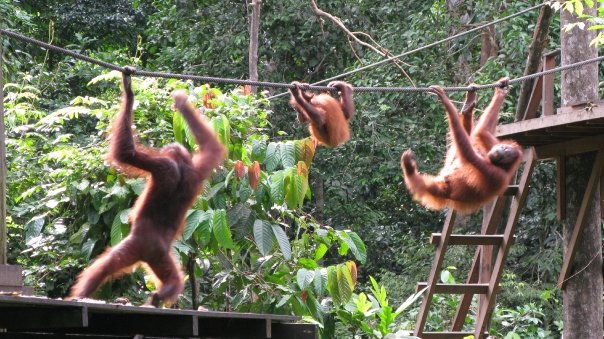 At 10am one of the volunteers opened the gate, checked my ticket and pointed to a sign above his head which featured the picture of a Macaque monkey where he commented, “don’t look at this guy in the eyes.” Walking over the bridge we were quickly greeted by a large group of rambunctious Macaques. I didn’t think much of them at first but soon grew to fear them as the males were rather violent, running along the railing and punching tourists as they tried to pass by. I was standing with two Dutch girls who were on the verge of tears and I tried to calm them down. We organized our thoughts and decided to slowly walk in the middle of the bridge with our eyes closed to avoid upsetting the animals. Macaques are notoriously violent when you look them in the eyes. They consider a glance in their direction a challenge and assertion of your power over them. 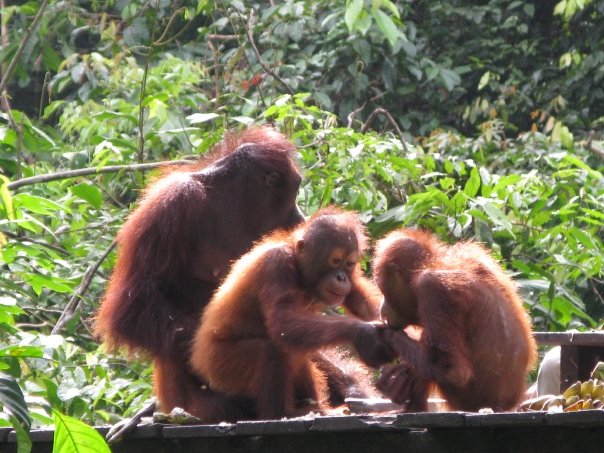 We finally arrived at Platform A, a large open area that overlooks the feeding platform just a few meters away. Two of the Centers volunteers walked up a ladder and started to throw bananas across the platform. One of these men held up a sign that read, “Silence Please.” The audience hushed and moments later we could spot an orangutan dangling from a tree branch and slowly swinging towards the platform for breakfast. More impressive was the small infant clinging to the mothers chest as she gently plopped herself beside a bundle of bananas. We overheard a guide commenting that the hairless infant was just born three weeks ago. The crowd gasped as the babies tiny hands pulled on the mother’s teat. Over the next thirty minutes a total of eight orangutans arrived on the feeding platform and ropes and ladders which acted as a stage for the monkey loving tourists who quietly took pictures just a few meters away. My two favourites were around three years old. They acted just like any human child would; stealing food from their parents, pulling their mothers hair, jumping around upside down on an outstretched rope and generally acting goofy. 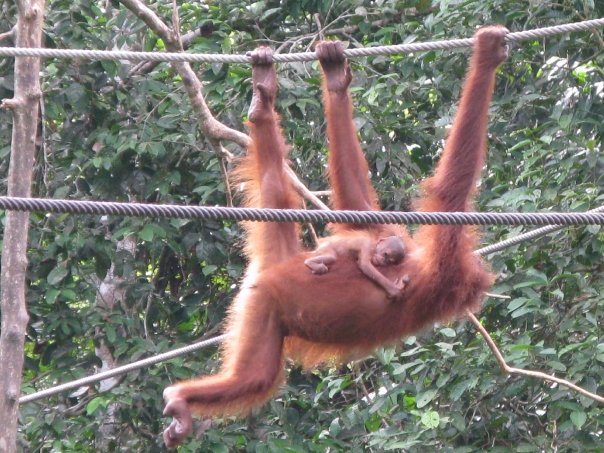 I believe the two hours I spent standing in the middle of the Sepilok jungle, in the hot humid morning staring at orangutans in the wild just might have been one of the most surreal moments of my life to date. I had to close my eyes, open the again, and realize that I was in the middle of the jungle looking at these beautiful endangered monkeys in their natural habitat.