The drive from Tapah to Tanah Rata is a 70 km climb through the mountains. We chugged winding cliff side roads and stared into a dreamy, crimson sunset. Malaysia’s Cameron Highlands are covered in thick forest some 1300m to 1829m above sea level. Malaysia’s favourite mountain resort is the classic Christmas destination for rich urbanites who travel four hours from Kuala Lumpur to enjoy the crisp and cool temperatures.

As our bus arrived on the outskirts of town I realized the mountains provide a suspended state of British colonial calm. Altitude loving tea fields dressed the undulating hills in an emerald coloured corduroy scattered with strawberry, honey bee and butterfly farms. Local children ran after our bus waving their hands and shouting as we passed. We zoomed by two impressive waterfalls and soon after had our first glimpse of the Highlands famous sprawling tea plantations. We arrived in Tanah Rata just as the rouge colours of the setting sun blasted through the jungle and I found myself rubbing my arms to rid myself of the chilly goosebumps that crawled up my back. 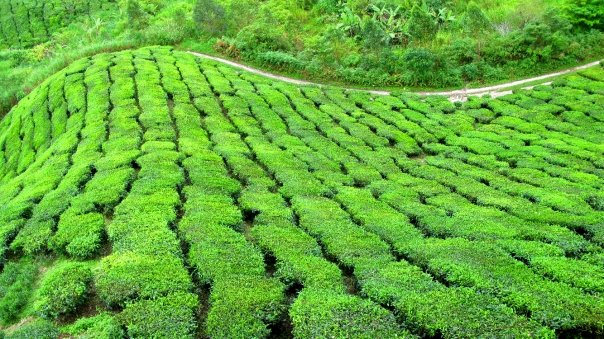 I had reserved a room at Fathers Guesthouse and hiked up a long flight of stairs before arriving at a Victorian mansion. The guesthouse offers cheap dorms (three dollars a night) as well as pricier private rooms. The dichotomy created an interesting atmosphere as half of the guests were frugal backpackers while the other group tended to be wealthier couples from Europe.

We spent the evening chatting with a bunch of the backpackers from northern England while drinking cheap Thai beer. Before bed I quickly ran to the bathroom as storm winds blew me to and fro. Back in the dorm I dressed myself in three layers and tucked myself under two wool blankets. I spent the first hour in bed shivering as my body slowly adjusted to the frigid temperature. 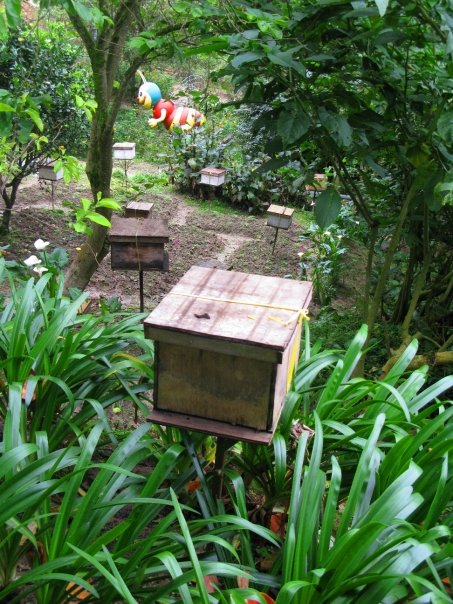 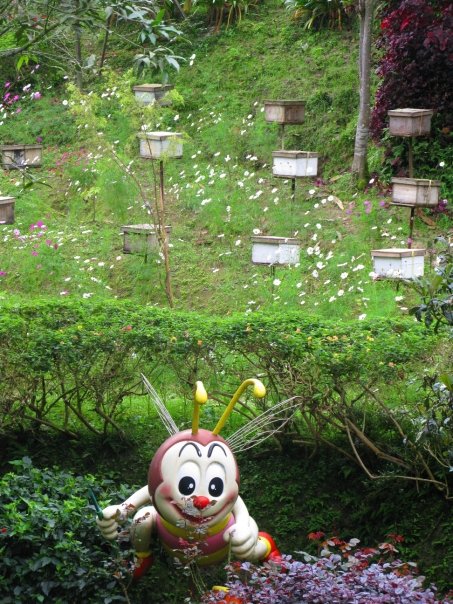 In the morning we hopped on a public bus which ever so slowly crept out of Tanah Rata to the farm centric junction. Our first stop was a honey bee farm run by a Chinese family who claimed that their honey was, “good for stomach, head and immunity.” We walked around the farm property which was dotted with apiary stands that buzzed with busy bee’s that flew around fragrant flower gardens.

After sampling a spoon of honey we walked to the junction where we spent the next twenty five minutes walking along a one way jungle road. All of a sudden the road opened up to give us a jaw dropping view of the Highlands famous tea estate landscape. We ran into a German couple hiking in the opposite direction and were shocked when they told us that the Sungai Palas Boh Tea Estate was another 45 minute walk. Without much thought we both jabbed our thumbs into the street and became hitchhikers. A few minutes later a car slowed down and motioned for us to hop in. A couple from Penang drove us the rest of the way, passing by many beautiful British colonial mansions sitting amongst rolling bright green tea fields. 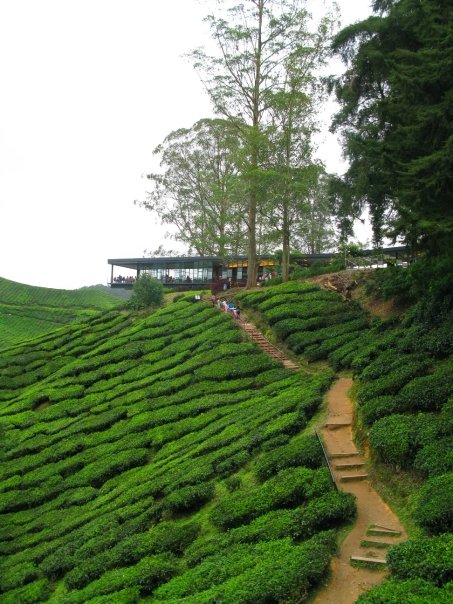 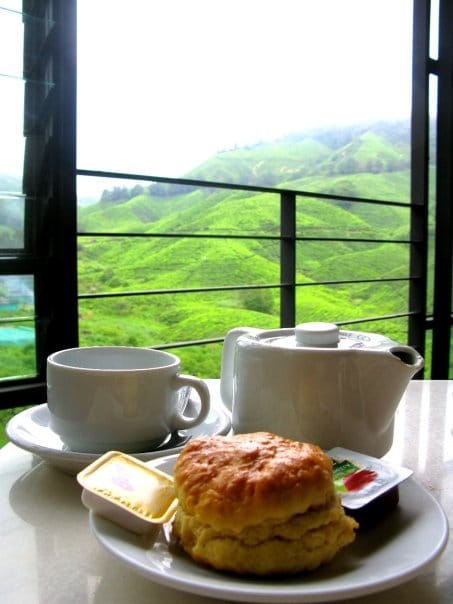 The Sungai Palas Boh Tea Estate is the regions most famous tourist attraction. Visitors hike up a small path, flanked on both sides by rolling tea shrubs before arriving at the stunning Boh Tea Café. The café building is perched on a cliff which overlooks the surrounding valley. I ordered a hot raison scone with butter and strawberry jam as well as a small tea pot of Earl Grey Tangerine Loose Leaf Tea. We both gobbled up our food, speechless, as we stared across the cloud covered mountains. After our snack we walked through a small museum which described the history of the Boh Tea Company and then spent the next few minutes walking through a tea factory. We watched workmen lifting massive trays of dried tea leaves which were dumped on conveyor belts that disappeared through a maze of machinery. 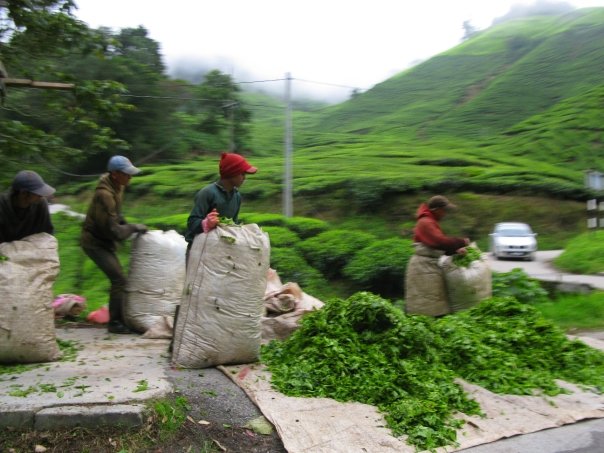 We waited just outside the parking lot and stuck our thumbs out again. A Malay family from Kuala Lumpur stopped at the side of the road. The mother waved us over and told us to hop in the back of their van. After slamming the door shut I realized that there were seven children in the back seat smiling back at us. We lucked out as the family was driving to one of the more famous strawberry farms which we would not have had time to access on foot due to its off the beaten path location. We walked past hundreds of rows of strawberries plants and I ordered a small bowl of vanilla ice cream topped with fresh strawberries which was devoured in seconds. 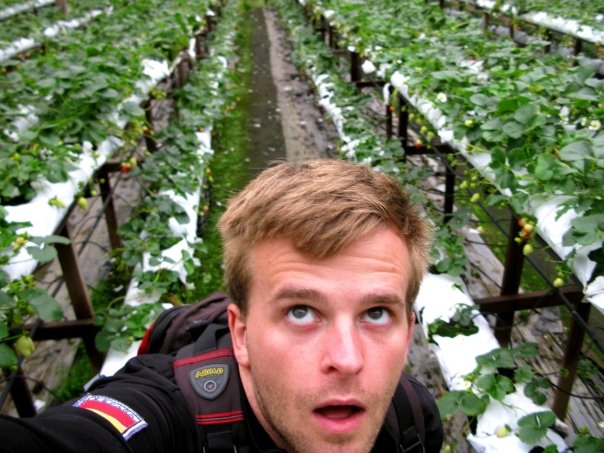 Back in the van with our surrogate family we drove back towards Tanah Rata and got dropped off at the small town of Brinchang. I found a cheap little Indian café where we each gobbled up a plate of roti canai and tosai crepe stuffed with potato marsala. This spicy meal was washed down by a warm frothy mug of chai. We couldn’t help but laugh as we got our bill and realized that we each paid two dollars to fill our tummies to the brim. 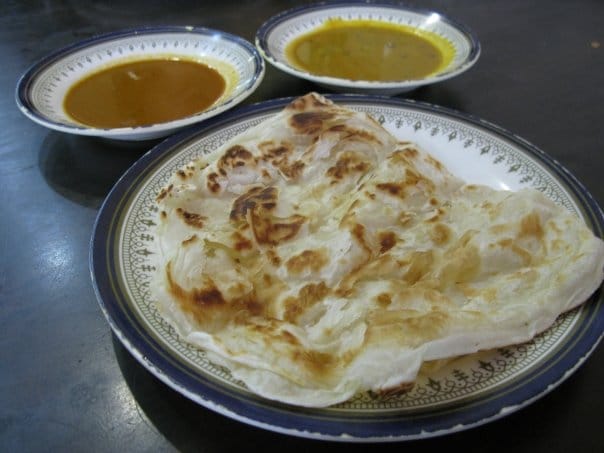 We popped by a local supermarket and bought a bottle of cheap vodka, orange juice and a large bar of hazelnut Cadbury chocolate in preparation for our Christmas Eve dinner celebrations. Once back up at the hostel we joined a large table of rowdy Europeans who sat in front of a pyramid of beer cans. The patio outside of the restaurant had been rearranged for a BBQ and salad buffet. People paid a considerable amount for the dinner and also made separate donations which all went towards funding a school for poor local boys. We spent the next two hours eating roast chicken wings, potatoes covered in cheese, grilled lamb, and a buffet of fresh salads. 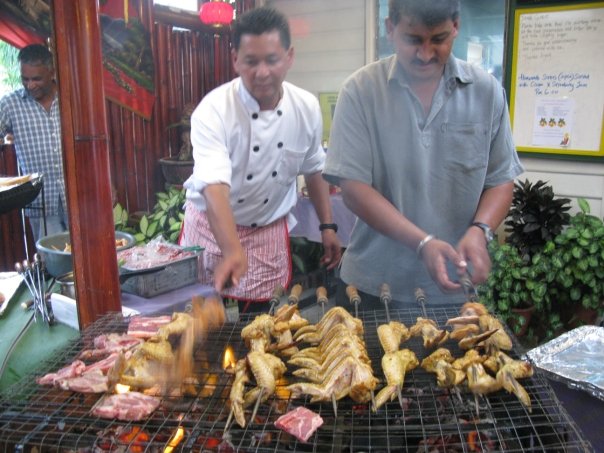 The following morning I woke up early as a torrential rain storm pounded on the roof of our room. I quickly packed my things and rushed down the steps as my hair filled with fresh rain. It was Christmas Day and I found myself soaking wet trying not to fall as I hobbled down the side of a mountain. I could hear the faint melody of Christmas Carols which were bleating through the church across the street. I climbed up onto my first luxury bus and sighed with satisfaction as I sank into my plush seat. I sprawled across my comfy chair and tried to sop up the water running down my forehead. I nibbled on a Christmas Breakfast which consisted of the tail end of a bottle of water and a Cadbury chocolate bar. We slowly crept out of town as I quickly passed out in my seat.