Driving into Georgetown was an enlightening experience. I was not expecting to see such a large number of massive high rise condominiums on an island which I thought was going to be, shall I say, quaint. Once out of the newly developed metropolis I arrived in the cities old quarter where the streets took on an entirely different flavour. It was 11pm at night and I think in a short three block stretch of road I must have seen ten or twenty glowing temples, churches and mosques.

I arrived at 100 Cintra Street, Penang’s most popular guesthouse which is located in one of the oldest colonial mansions in Georgetown. A little Chinese man runs the place and was overwhelmingly energetic and helpful. The mansion is located right in the middle of the city’s bustling China Town. I dropped my things off on the second floor dorm room and instantly enjoyed the colourful, eclectic, colonial feel of the place. I sat on my cot and looked up at the two Chinese ceiling fans which spun and hummed above my head. Moonlight passed through four large antique provincial shutters and lit up the crumbling and colourful walls of the interior. The Mansion actually doubles as a quirky museum throughout the year as it showcases a colourful collection of Penang antiquities. 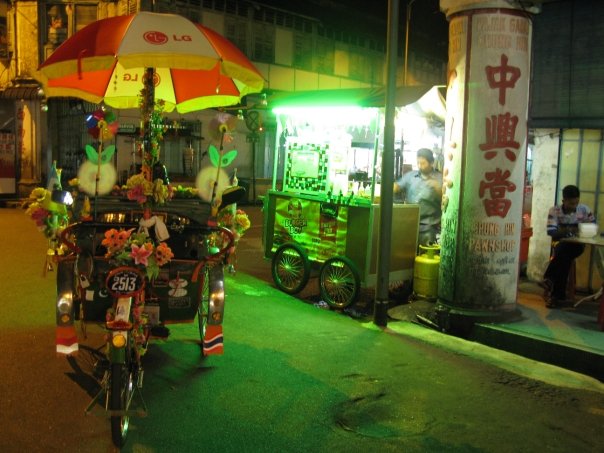 Penang was originally part of the Malaysian state of Kedah until 1786, when Captain Francis Light built a fort at the site of present-day Georgetown and managed to get the island ceded to the British East India Company. Along with Malacca and Singapore, the island was one of the three British Straits Settlements. The name Penang comes from the Malay word Pinang, means the betel nut. The name Pulau Pinang translated literally from Malay means “betel nut island”. During the early and middle part of the last century, Penang was also known as “The Pearl of the Orient”. The capital, Georgetown was named after King George III of Great Britain. Today, Penang has the highest population density in Malaysia and is the only state where ethnic Chinese are the majority.

The following morning I walked past a Chinese dim sum restaurant that was both bustling inside and also had locals pouring out onto the streets waiting to eat. I immediately made the obvious decision to grab a seat and enjoy a fine feast.

I was quickly seated by a flock of incredibly eager Chinese women who hobbled across the floor. I was served a hot pot of green tea and inundated by the screaming chatter of four women who yelled across the dining hall at us. They screamed, ‘po po!’ (pork), ‘chick ah’ (chicken), ‘shrim’ (shrimp) and ‘dump-ing’ (dumpling). I also caught one of these enthusiastic ladies at her cart who motioned for me to look down at a slippery gruel which she insisted was “good good.” I asked what was in it and she pointed to her stomach and said “chick ah stom-ah and rice-ugh.” 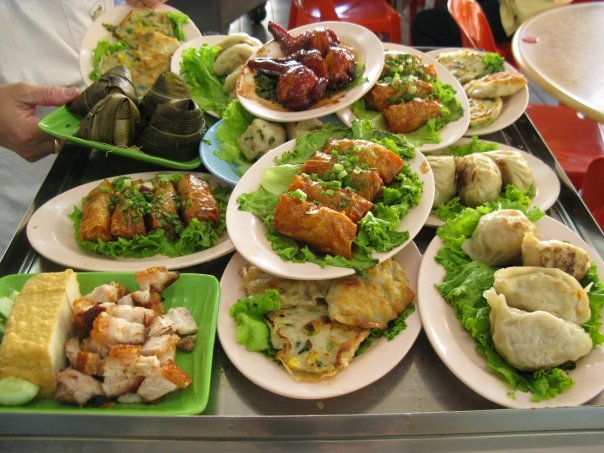 It seemed as though the ladies with their respective carts were actually earning a commission (and if not, they must have naturally just been very feisty and proud of their products). They acted sort of cut throat, cutting their coworkers off in an attempt to tease us with their culinary treats. I ended up walking around the restaurant and having several dishes brought to our table. I enjoyed a selection of open faced chicken dumplings, shrimp dumplings, pork shoulder with a tangy sauce, a cold pastry stuffed with bean sprouts and beef and a hot spicy Chinese bun.

Feeling delightfully satiated I left the restaurant’s shade and walked into the heat of the day. For the next three hours I visited two mosques, six Buddhist temples and the city’s most famous Hindu Temple. At the various Chinese temples my clothes were perfumed by clouds of sweet smelling incense. The temples have many devotees who come here each day to light sticks and lay gifts at Buddha’s feet. One of these temples featured a beautiful Koi fish pond and waterfall which I dipped my feet into quickly to cool off my tiny toes. 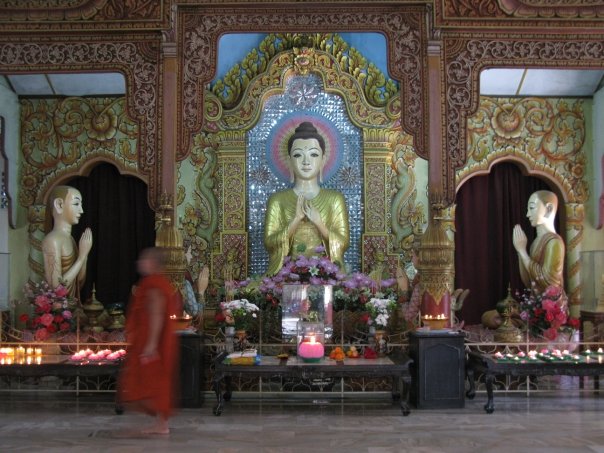 My shirt was now sticking to my back as the days heat was at its peak. I waddled to the Victoria Memorial Clock Tower and attempted to cross the street. Soon startled when three men wearing yellow shirts blew their whistles at me. A moment later I realized that there was a cycling race going on and I would have been trampled by tire tread had I walked into the middle of the street. We strolled around the race track and cheered for the hundreds of cyclists who zoomed across the city square.

Our next stop was Fort Cornwallis which was hosting a local food expo along the Fort’s esplanade. We sampled various spiced dried banana treats, exotic fruit juices and chewy Indian snacks. 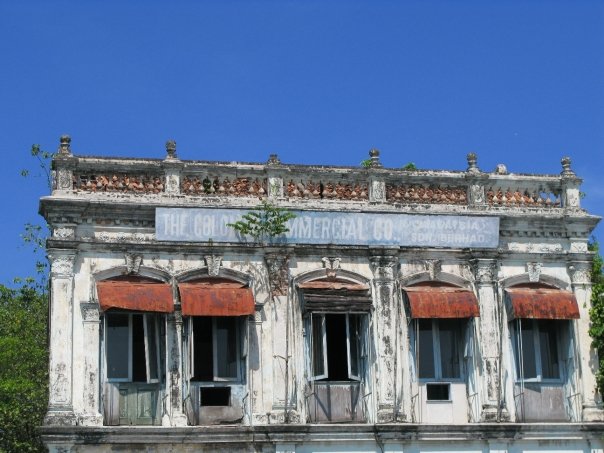 In the evening I adventured to Little India which I fell in love with instantly. The streets smelled of aromatic spices and fresh floral bouquet. Stands along the street sold ceremonial flowers and daisy necklaces which offered a light dusting of pollen that floated through the street. The neighbourhood was also lined with sari clothing shops and Bollywood film and music emporiums.

I walked up to the city’s oldest and most grandiose Hindi place of worship, Sri Mariamman Temple. With a history tracing back to 1883, the temple interior is ornately decorated and houses the priceless statue of Lord Subramaniam, which is embellished with gold, silver, diamonds and emeralds. The streets in Little India at night are full of exciting Hindi pop music which entertain the throngs of people who come to eat on the street at cheap Indian hawker stalls. I was starving and ordered a steaming chapatti with dhal. I then devoured a plate of aromatic saffron rice with creamy chicken marsala. I finished my meal off by dipping two large battered onions in sweet chutney. 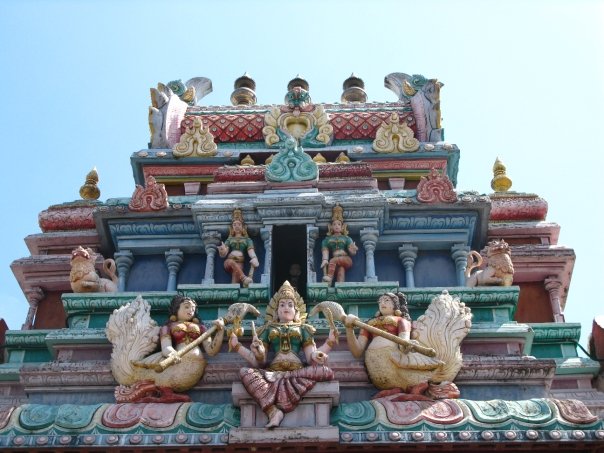 Just as I was finishing my feast I heard a commotion around the corner. I jumped out of my seat and was soon greeted by an action packed Chinese parade. For the next hour I watched hundreds of local Chinese dancers skipping through the street. Little children dressed in formal dress waved along the street as their older brothers ran around in dragon costumes and their sisters banged on drums and brass cymbals. Older Chinese men wore funny masks and danced around the street with fans. Teenage boys performed tricks with large flags which they balanced on the tips of their chins. 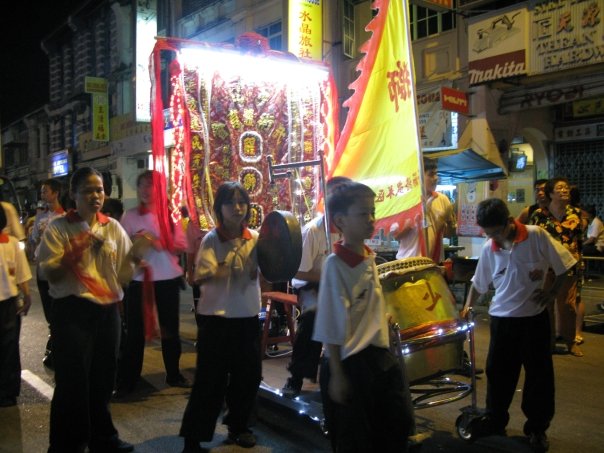 The next morning I headed back to Little India to visit the city’s most famous vegetarian eatery, Madras New Woodlands Restaurant. I ordered a fresh mango lassi and alternated between sipping on my straw and nibbling on a few vegetable samosa’s. I ordered the restaurants specialty, Mysore Masala Dosai which is a rice crepe filled with curried potato. The dish is accompanied by a spicy tomato soup and two dips (coconut caraway and tomato onion).

After being blown away by yet another extremely cheap and delicious Indian meal I walked to The Goddess of Mercy which was built in 1800 by early immigrant settlers from China. The building, also known as Kuan Yin Teng, is decorated with intricately crafted dragons and sculptured stone lions, said to be its guardians. After walking through the main temple doors my eyes stung as I passed through a thick black cloud of incense. Buddhist devotees poured oil into lanterns and lit incense sticks while bowing before several gold Buddha statues. Just down the street I passed by Cheong Fatt Tze’s Mansion one of the cities colonial landmarks before arriving at the Beryl’s Chocolate Mansion Boutique. 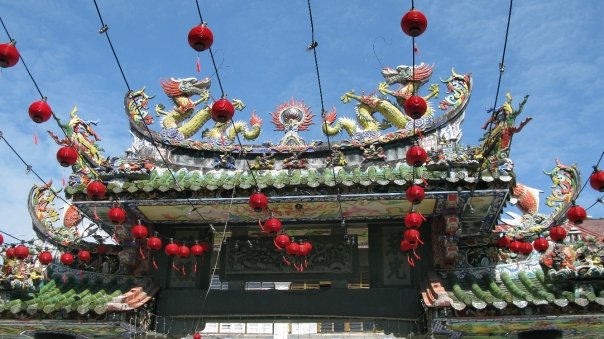 Beryl’s is Malaysia’s most famous chocolate manufacturer and has over 90 different varieties to choose from. I entered the front doors as a sweaty mess and was instantly cooled by the air conditioned interior. I sampled chocolates filled with coconut, mango, pineapple, durian (a local smelly fruit), sesame, strawberry and hazelnut. I also tasted the cities most famous regional drink specialty, Penang White Coffee, which is made with coconut oil which gives the beverage a sweet taste and mild coconut aftertaste.

In the evening I hopped on a local bus headed out of the city to the west end of the island. I got off right on the waterfront and walked a few blocks until I reached two of the islands most famous temples. I first stopped at the glistening gold covered Dharmikarama Burmese Temple. The temple has a beautiful wishing pond (filled with huge giant orange fish), a pagoda and a long hall which depicts famous stories from the life of Buddha. 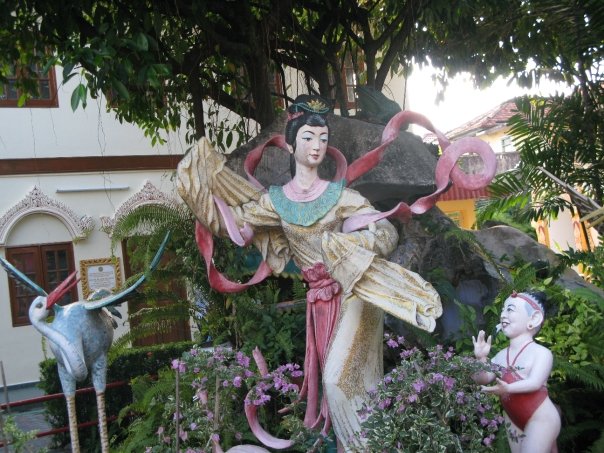 Directly across from the Burmese Temple is Wat Chaiya Mangkalaram, a Thai temple which allows tourists to compare and contrast architectural styles between the two neighbouring countries. The temple grounds are more colourful and feature many more exotic and mythical figures. The large pagoda houses a 33 meter gold plated reclining Buddha said to be one of the longest in the world. After spending an hour absorbing grandiose architecture and many magical statues I walked towards the waterfront where I sat on a park bench and watched a group of monks walking along the boardwalk.

The islands famous Gurney Road is located a few minutes walk along the beachfront. It’s famous for its hawker stalls where one can eat just about any kind of Chinese or Malay snack for no more than a few pennies. I stopped at one stall which claimed to offer over 90 varieties of tropical fruit juice. The majority of vendors sold skewered seafood, Chinese soup and noodle dishes. 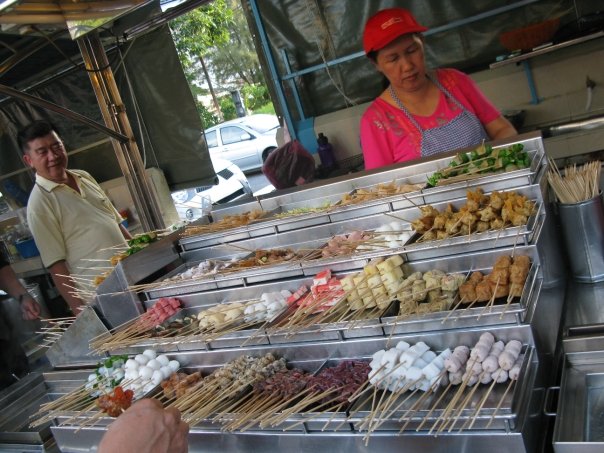 Back in China Town, I spent my final night in Penang eating at two different hawker stalls along the street. Cars, mopeds and trucks buzzed past as I munched on deliciously cheap delicacies. I stared at locals who slowed on the side of the road and poked their heads outside of their car windows to order their take away dinner. At my first stall I stared down at a large pot of gravy with chicken feet floating and bubbling about the surface. I also noticed a tower of juicy roasted duck legs. I ordered a 70 cent bowl of chicken soup with sliced duck meat and noodles and slurped it up quickly. I then skipped down the street and gobbled up a plate of Malay fried noodles with chicken, pork and prawns. Fully stuffed and ready for bed I walked back to my hotel, packed my things and lay on my bed thinking, “good Lord Penang tastes delicious!”