Chupe de Quinoa is one of our favourite creamy Peruvian soups to cook at home.

Our homemade Chupe de Quinoa recipe is quick and easy to make, ready to serve in under 40 minutes!

What is Chupe de Quinoa?

Chupe is a culinary term used in South America for a variety of stews often prepared with chicken, red meat, lamb, fish, shrimp, potatoes and yuca.

While Chupe is typical of South American cuisine, it is mostly associated with culinary traditions in Bolivia, Chile and Peru. The city of Arequipa in Peru has a traditional selection of chupes that are served on specific days of the week. On Fridays, the chupe is meatless because of the Catholic traditions of the country.

Travel to Peru by Making Chupe de Quinoa at Home

In Peru, I’ve slurped through steaming bowls of traditional Chupe de Quinoa at restaurants in Lima, The Sacred Valley, Cuzco and Puno.

After enjoying your first few sips, you’ll realize why a steaming bowl of traditional Chupe de Quinoa is a must-try when visiting Peru!

Where To Eat Peruvian Quinoa Soup

If you live in a large city in Canada or America you’ll likely have access to a local Peruvian restaurant that serves an authentic Chupe de Quinoa.

Haven’t traveled to Peru before? It may be helpful to first sample Chupe de Quinoa at a local restaurant to better understand how the dish is served. You’ll get an idea for the desired thickness of the broth, intensity of Aji Amarillo Paste flavour and ideal proportion of vegetables to liquid.

Onions, sweet potato, corn, quinoa and mint are available in abundance year round in Canada but we especially love to serve this savoury soup in the Fall at Thanksgiving or the colder months throughout the winter.

Our Chupe de Quinoa recipe is not vegetarian as it contains chicken broth. You can easily substitue mushroom or vegetable broth to make this Peruvian Quinoa Soup vegetarian friendly.

Traditional recipes are not vegan as they contain cream but you could substitute the dairy for coconut milk or your favourite nut milk.

Olive Oil is ranked as one of the healthiest fats and is a staple in the Mediterranean diet. It contains vitamins E and K and plenty of beneficial fatty acids and antioxidants.

Consuming dairy products (such as milk and cream) provides health benefits — especially improved bone health. Dairy foods provide nutrients that are vital for health and maintenance of your body. These nutrients include calcium, potassium, vitamin D, and protein.

Oregano is rich in antioxidants, may help fight bacteria, could have anti-cancer properties and can decrease inflammation.

Fresh mint is antioxidant and anti-inflammatory, and can have a calming effect on the digestive system. It is also a good source of folate, which supports blood health.

What To Serve with Chupe de Quinoa

We most often serve easy Peruvian Quinoa Soup as a hearty lunch. If you’re hosting a large dinner party you might want to serve our Chupe de Quinoa as a small portioned appetizer before serving heartier mains. 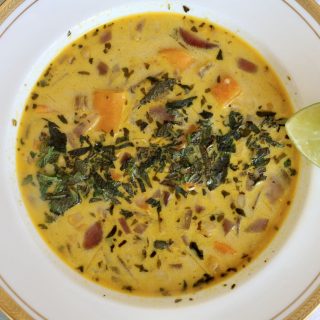