This Spanish Soup recipe is one of our favourite healthy soups to enjoy during the cold Fall and Winter months.

Our homemade Spanish Soup recipe, also known as Sopa de Ajo, is quick and easy to make, ready to serve in under 30 minutes!

Travel to Spain by Cooking Garlic Soup at Home

What I love most about traveling to Spain is the opportunity to sample unique dishes in each region and city. The Spanish dishes in Madrid and Barcelona are unique to what you might find on restaurant menus in Salamanca, Toledo, Valencia, Mallorca, Ibiza, Seville, Cordoba, Granada and Malaga.

Once back home from a Spanish holiday you’ll have a newfound appreciation for the flavours of Spain and can impress friends and family by making our quick & easy Spanish Soup recipe.

Where To Eat Spanish Soup

Garlic, eggs and cured ham are available in abundance year round in Canada but we especially love to serve this savoury soup in the Fall at Thanksgiving.

Sopa de Ajo or Sopa Castellana as it is also known, is yet another Spanish dish with humble origins. It was the Castilian shepherds who are responsible for creating it when they had to travel across long distances and needed a dish that would not only warm them up in the cold winter nights, but also give them a lot of energy all at once.

Even though it’s origins were in Castile, Spanish Garlic Soup is consumed all over the country today. It is typical light lunch, and is sometimes eaten a couple of hours after breakfast, with an egg or two dropped. They cook inside the bowl thanks to the soup’s own heat. It’s often touted as Spain’s hangover cure.

It is a very common dish to slurp during Lent, which is why you might think that Spain smells of garlic at Easter. In the past it was quite common to serve Spanish Soup with garlic at weddings, topped with parsley and chopped hard boiled egg.

Spainards love pork so much you’ll almost find it in everything. So you guessed it, traditional Spanish soup is not vegetarian or vegan.

You can transform our authentic Spanish soup recipe into a vegetarian friendly dish by substituting chicken stock with vegetable broth and omitting the cured ham.

We do not suggest making a vegan Spanish Garlic Soup as the egg component really is absolutely necessary.

Our Spanish Soup recipe is packed full of healthy ingredients!

What To Serve with Spanish Soup

If you’re hosting a large dinner party you might want to serve our healthy Spanish Soup as an appetizer before serving heartier mains.

If you have leftover Spanish Garlic Soup you can store the soup base in the fridge in an airtight container for up to a week. To reheat simply zap it in the microwave or simmer in a small saucepan on the stove.

How To Make Healthy Spanish Soup 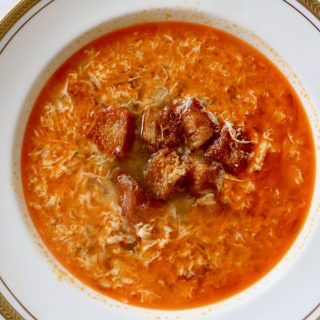