A thousand years ago Cordoba was the largest city in the world, with a population three times its current 320,000. It was also the capital of the Caliphate of Cordoba, which for several hundred years controlled much of the Iberian peninsula. While the city’s Moorish rule is long gone, its heritage is visible throughout the historic centre, best represented by the region’s must-see attraction, the spellbinding Mosque-Cathedral.

Things To In Cordoba 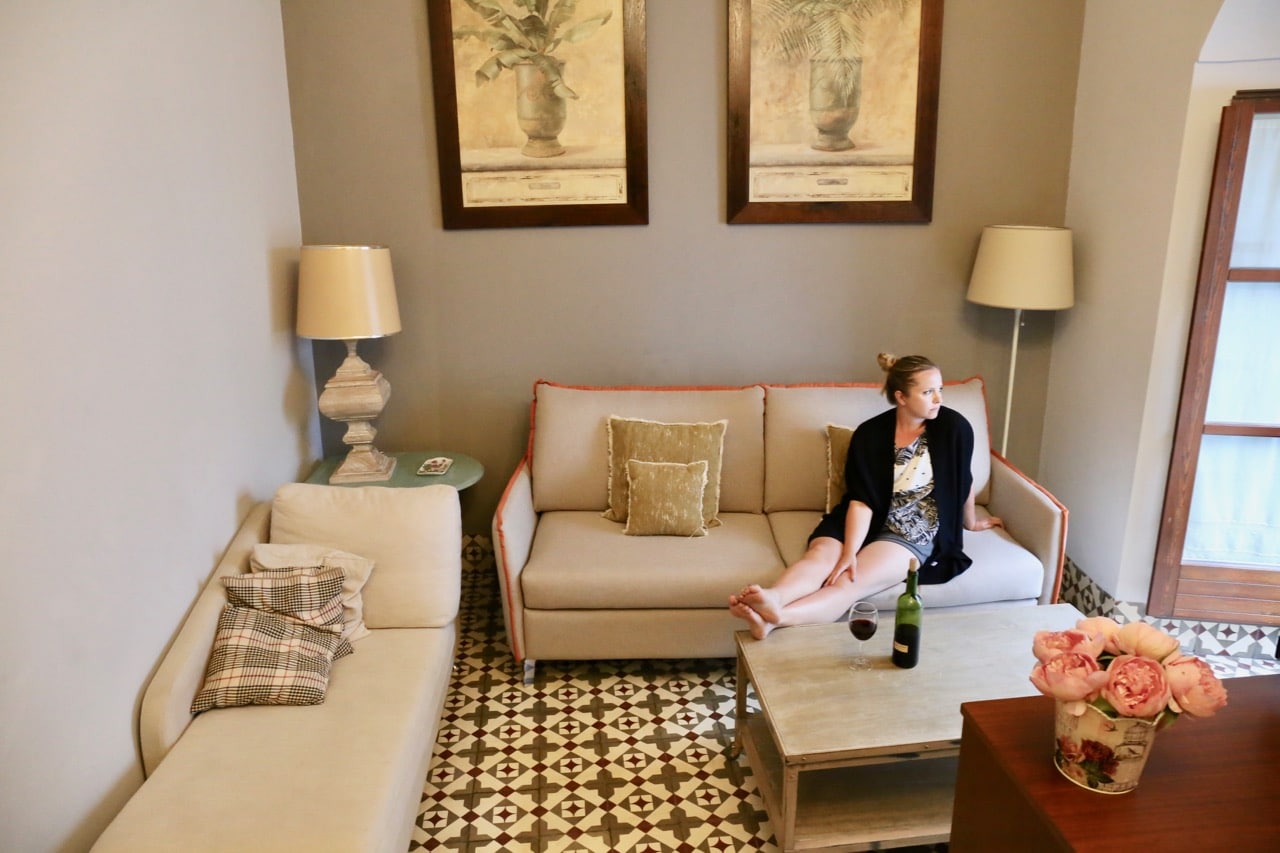 If you’re keen to enjoy a pedestrian friendly trip to Cordoba you’ll want to be located in the heart of the city’s Old Town. Alberca ApartaSuites is a petite boutique hotel featuring seven one-bedroom apartments that are located in an old manor house that dates back to the 14th-century. Step inside and you’ll be greeted by a bright courtyard, and colourful garden which plays home to a refreshing pool. For those looking to feel right at home, Alberca ApartaSuites offers exceptional amenities: two bathrooms, a bedroom with windows offering jaw-dropping views overlooking the city, a relaxing living room, and a kitchen outfitted with a washing machine so you can pop in a fresh load of laundry before hitting the streets. 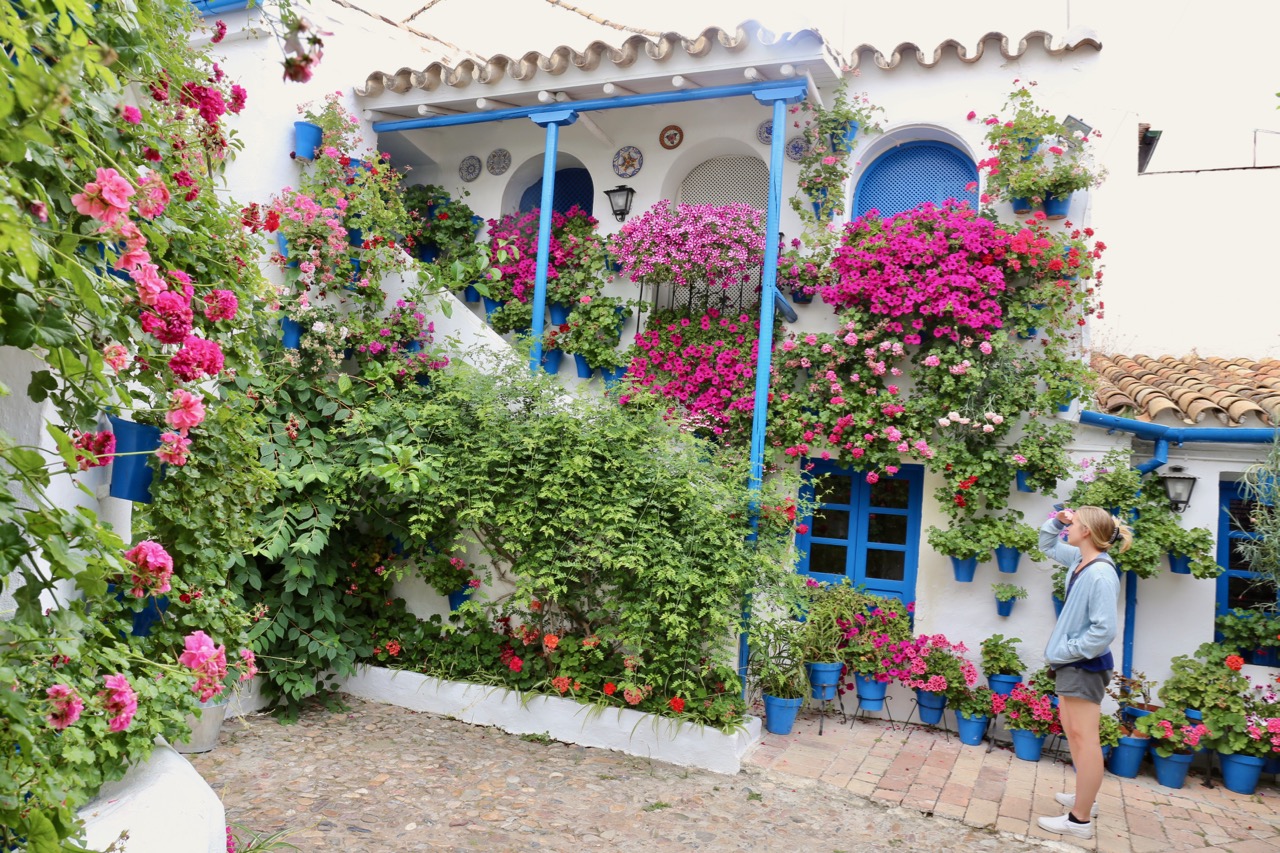 Flower fans enjoy a pilgrimage each May to Cordoba’s Concurso de Patios, an annual festival which has been running since 1918. Green-thumbing locals open up their homes to the public and show off the lush gardens that decorate their inner courtyard, or patio.

Cordoba’s now infamous courtyards are inherited by the Islamic house tradition, characterized by the construction of facades oriented towards its interior. Patio’s are distinguished by a multitude of flowers planted in both flower beds and blue pots, which hang across white-washed walls. Next to them, the wells or fountains embellish the site, forming a beautiful image in which water, light and vegetation merge, a clear reflection of the Arab past of the city. 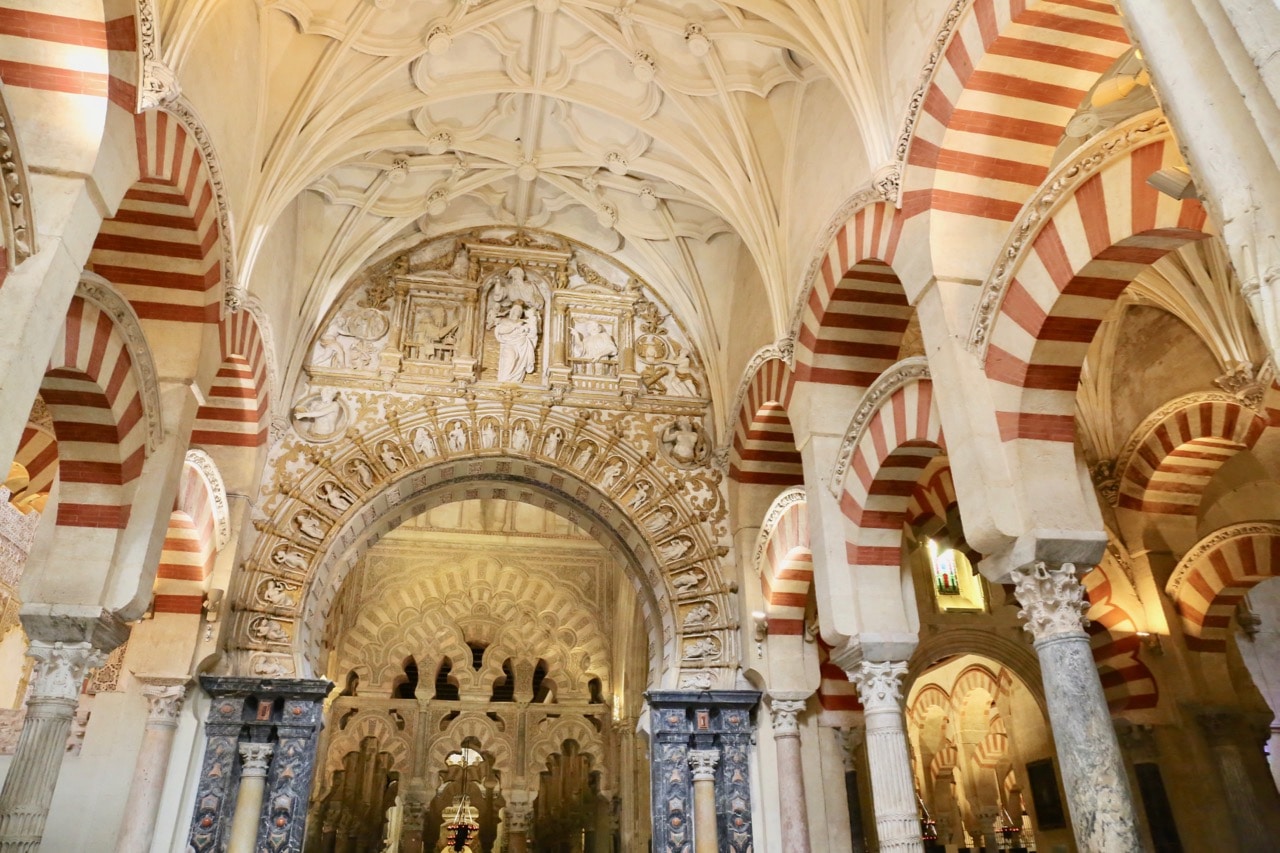 Cordoba’s start attraction is the Mezquita (also known as the Mosque-Cathedral), which dates back twelve centuries and is considered to be the perfect architectural embodiment of the power of Islam on the Iberian Peninsula. The original mosque was built by Abd al Rahman I between 785 and 787 but the building evolved over the centuries, harmoniously blending a variety of architectural forms. In the 10th century al Hakam II dreamed up the most lavish additions, including the elaborate mihrab and the maqsura. It wasn’t until the 16th century that a cathedral was built in the heart of the reconsecrated mosque. A visit to the Mezquita is a photographers dream, with warm light, sharp shade and a choir of ancient arches and pillars (more than 850 columns or granite, jasper and marble support the roof), offering dazzling visuals. 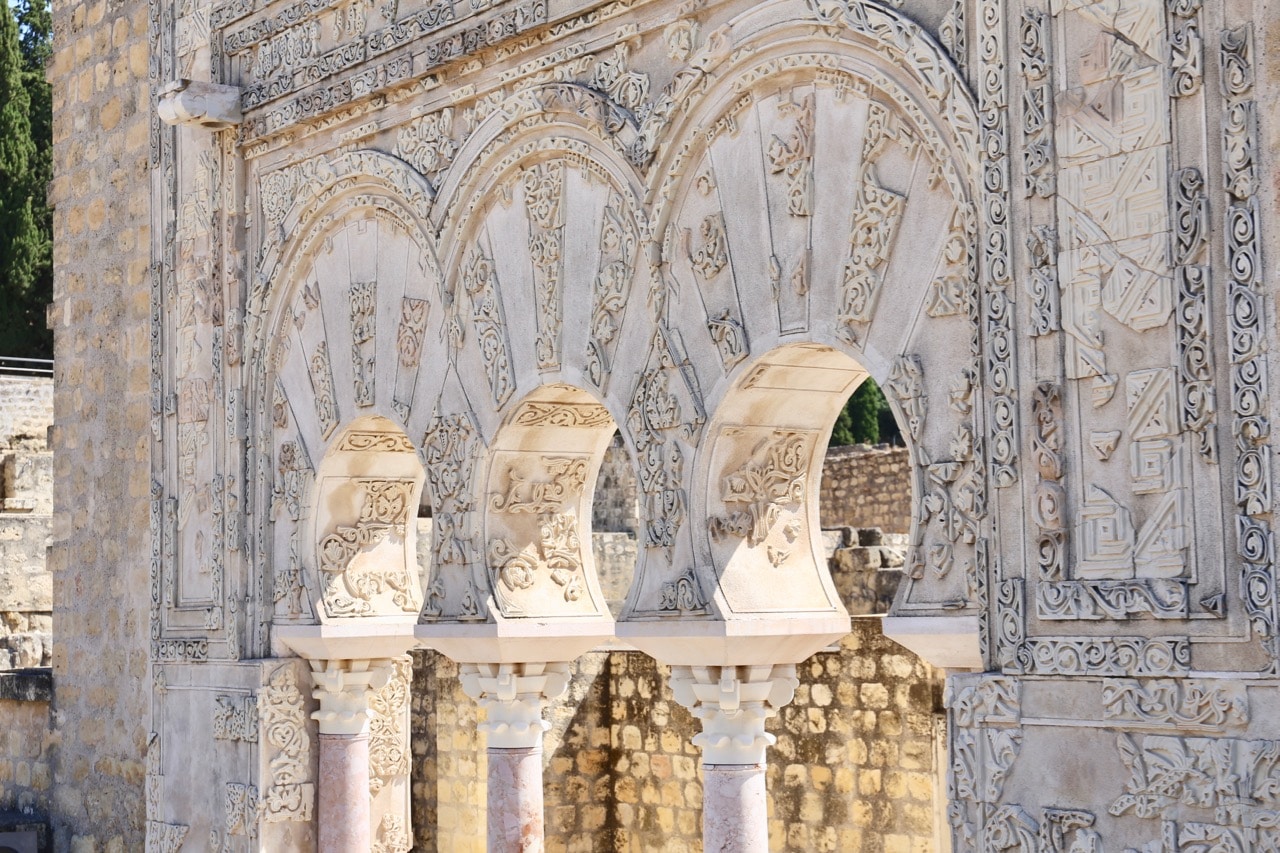 Just a few kilometres north of the city lies the ruins of a once glorious palace. Built in the 10th century for Caliph Abd al Rahman III, Medina Azahara is named after his favourite wife. He spared no expense, employing more than 15,000 mules, 4,000 camels, and 10,000 workers to bring building materials from as far as North Africa.

Start your tour at the sites newly opened museum and explore some of the palace’s excavated treasures. Then plop yourself down in the theatre and watch a fantastic animated film which takes you on a virtual tour of the community that lived here during the palace’s most opulent era. Visitors then hop on a bus and are delivered to the palace ruins, which is built on three levels and includes a mosque, the caliph’s residence and fine gardens. 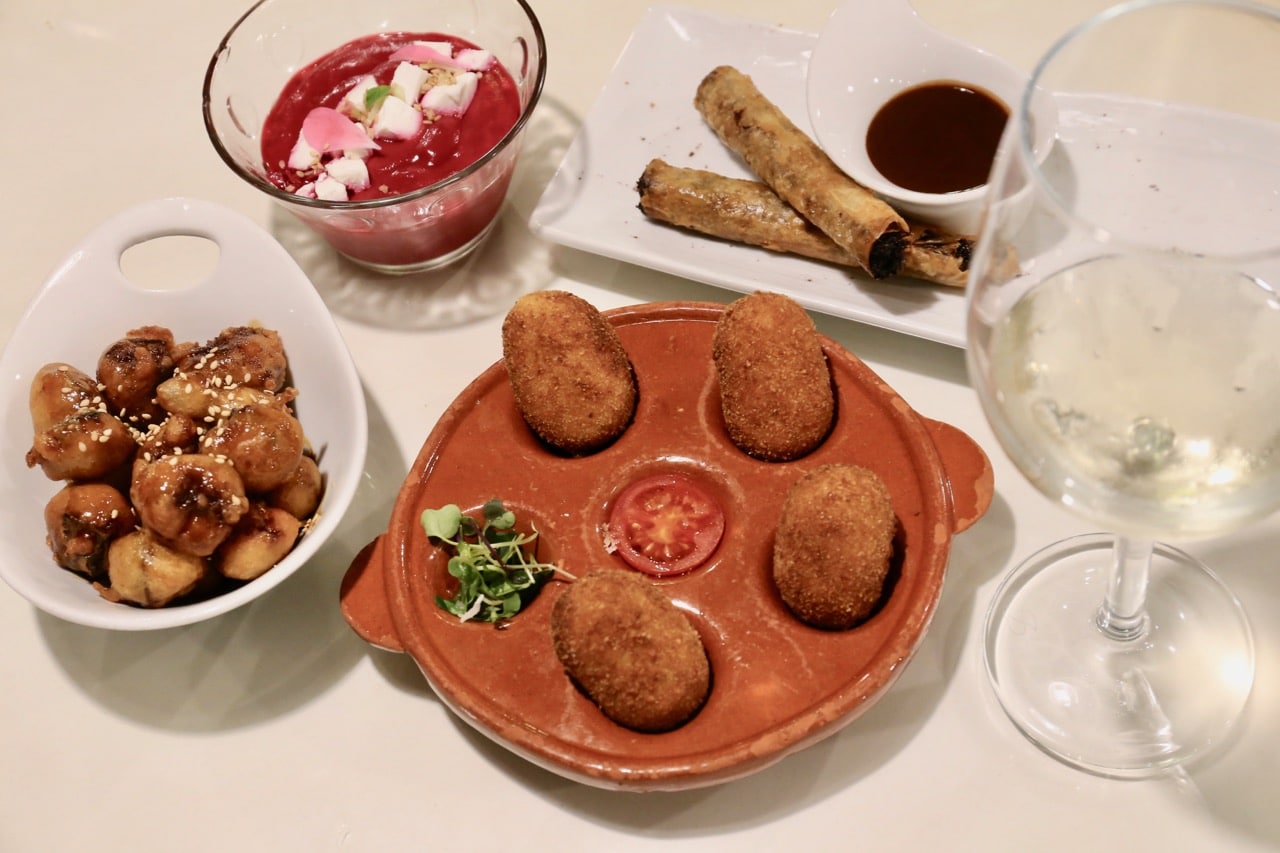 If you’re looking to enjoy a fine feast crafted with creativity and flare head to Garum 2.1 Tapas Bar. Open since 2010, Garum 2.1 combines traditional Cordoba cuisine with vanguard tapas creations. The restaurant is housed in a historic two-story building: the ground floor featuring elements of a traditional Andalusian tavern, including parts of the ancient Roman city wall, while upstairs you’ll find an elegant dining room. Highlights from our dinner include at Garum 2.1 include oxtail churros with chocolate, fried eggplant with molasses, and creamy salmorejo amontillado. 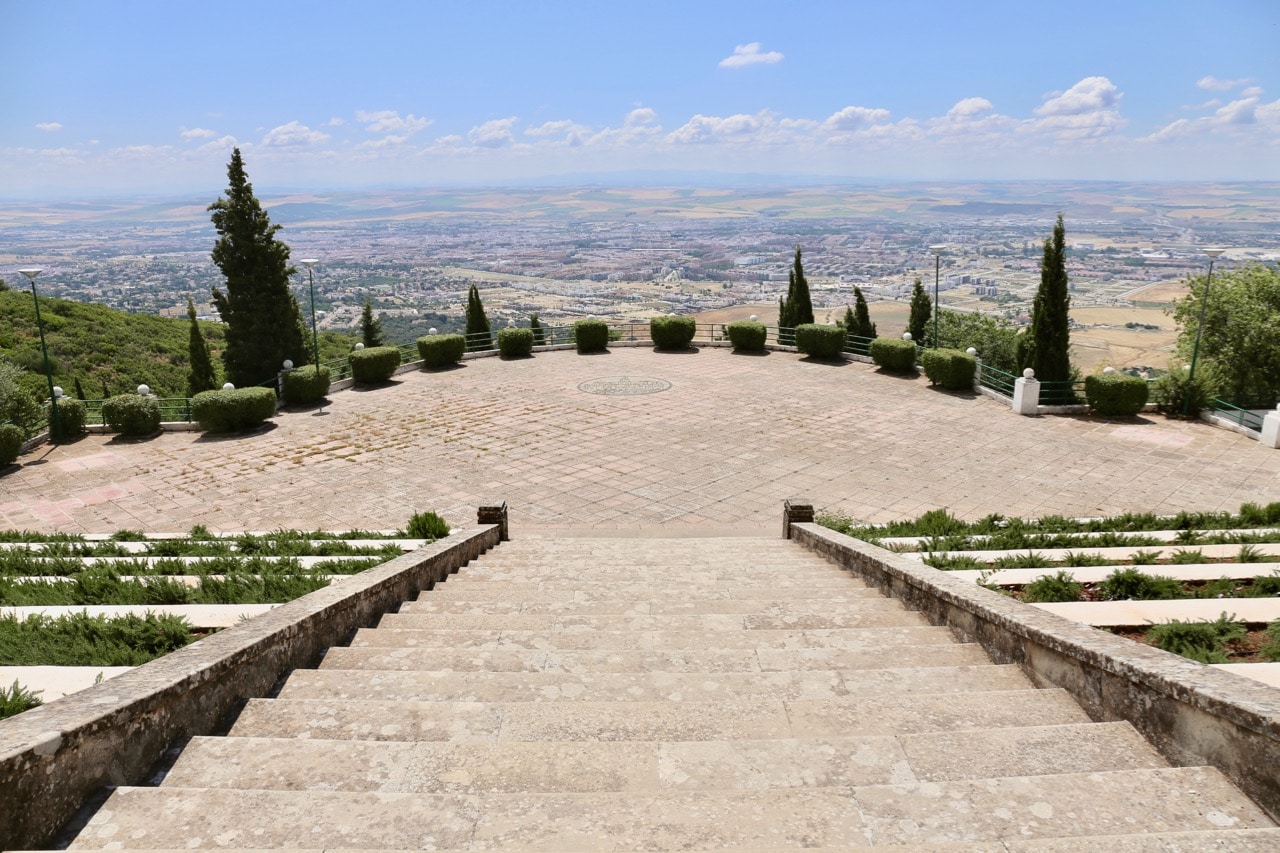 If you’re one of those tourists who’s always looking for a postcard-perfect jaw-dropping view enjoy a short drive outside of the city to Las Ermitas Convent. It’s a popular spot for locals who love to hike (so if you’re up for a few hours huffing and puffing swap the car for a good pair of shoes). Offering delightful tranquility and an outstanding panoramic view of Cordoba and the Guadalquivir Valley, Las Ermitas was first founded in the 17th century by a group of solitary monks.

The hermitage is made up of 13 tiny dwellings, some of which are still inhabited by a group of brothers of the order of the discalced Carmelites. Visitors can follow a path shadowed by cypresses providing access to a beautiful chapel. The best view is enjoyed from the convent’s terrace which is overlooked by a giant statue of Jesus. 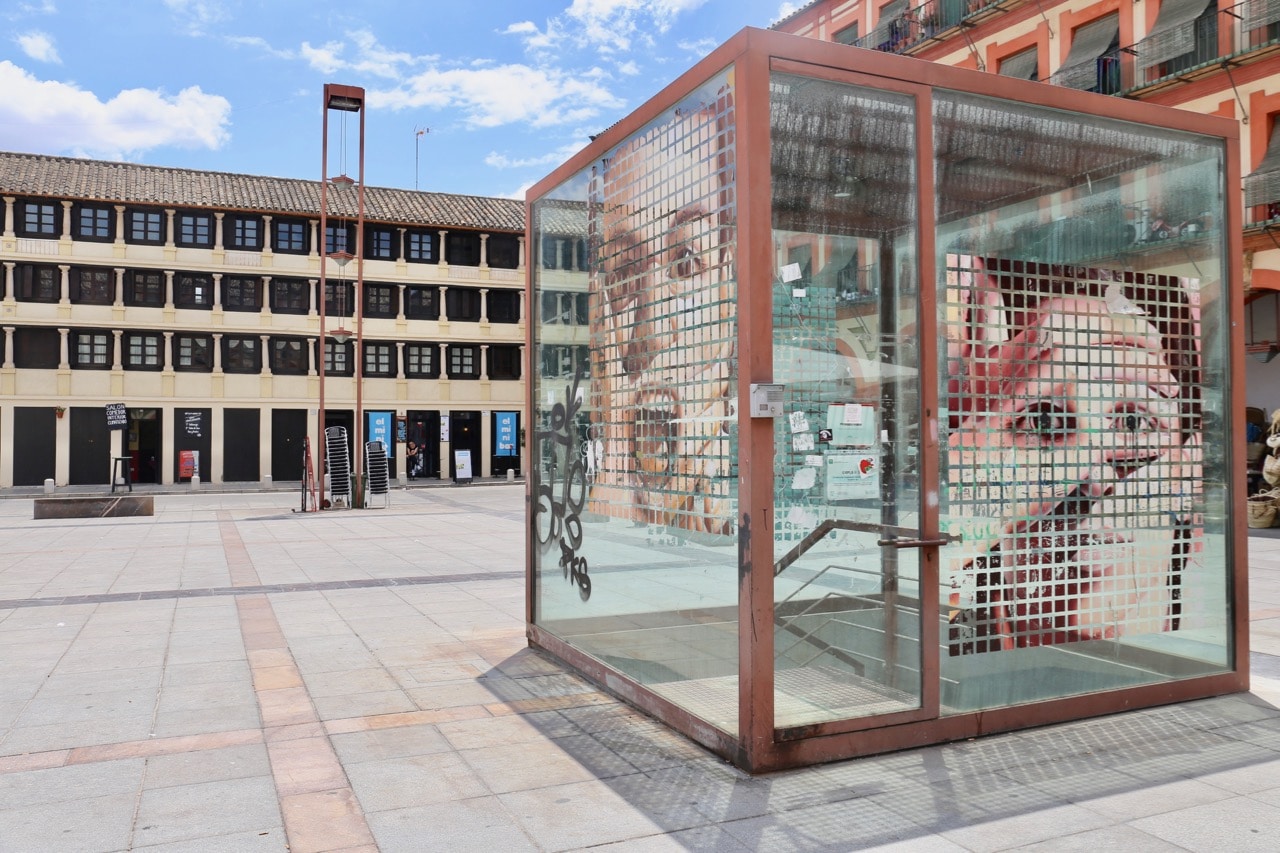 The perfect perch to people watch in Cordoba is at Plaza de la Corredera. This grand 17th-century square has an elaborate history as a site of public spectacles, including bullfights and Inquisition burnings. Today it’s ringed by balconied apartments and is home to some of the city’s most popular cafes and a weekly morning market. It’s best you arrive in the morning and grab a seat at Mari Paz to enjoy a plate of freshly fried churros served alongside a warm cup of chocolate. 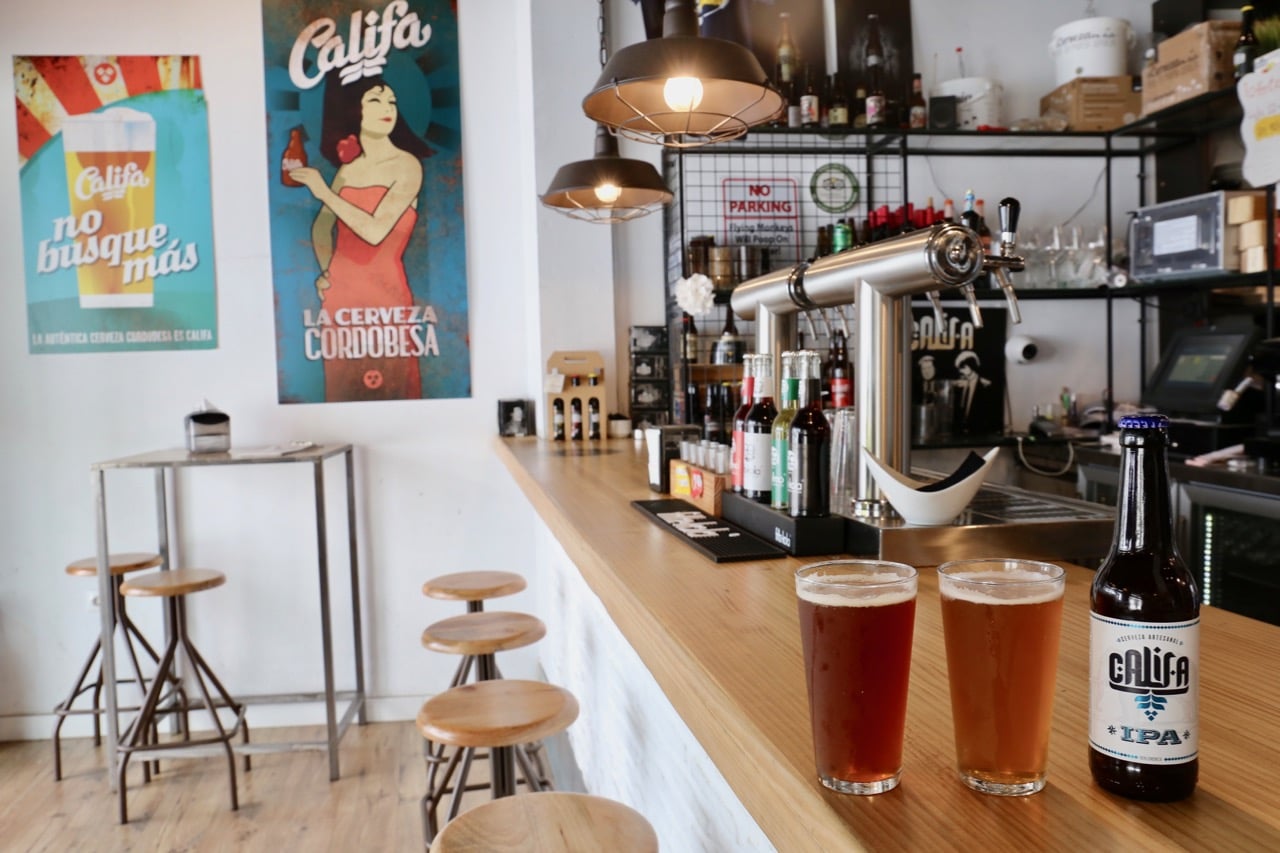 Craft beer fans looking to quench their thirst after a hot day skipping through the city should make a point of grabbing a mid-afternoon pint at Cerveza Califa. Hop up on a stool and enjoy a sampling of the microbreweries delicious draught featuring an Amber Ale, IPA, Wheat, and Blonde. The bartender manages a petite kitchen so if you’re peckish order a plate of spicy jalapeno topped nachos or a board of local cheeses and charcuterie. 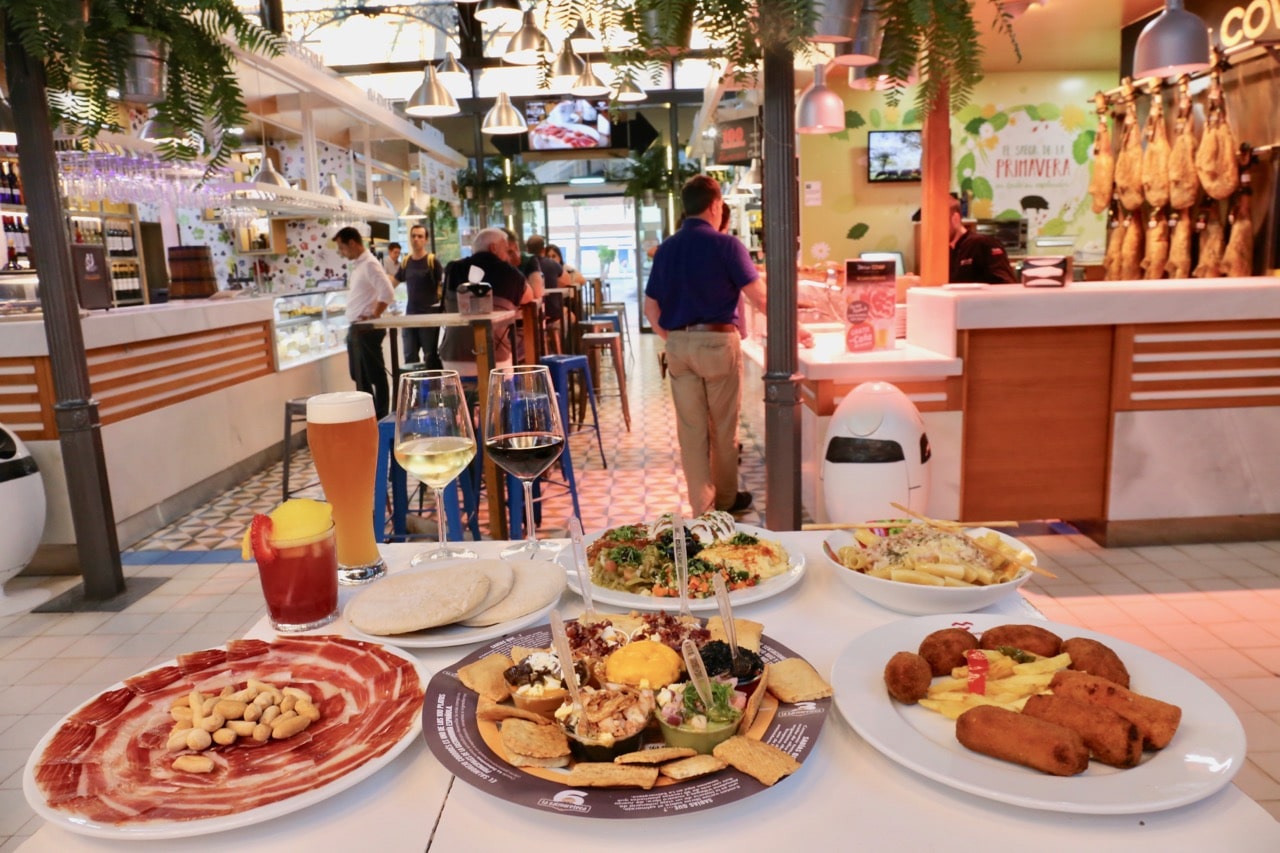 Cordoba’s Mercado Victoria is where hungry locals come to enjoy a culinary catchup with friends. The seriously classy food court offers everything from Spanish classics, to Argentinian empanadas, Japanese sushi, Middle Eastern salads, Hawaiian poke, and Italian pasta bowls. The whimsical space is set inside a 19th-century wrought iron and glass pavilion in the Victoria gardens just west of the old city. It’s easy here to transition from dinner to dancing as the market is filled with stalls serving beer, wine, and cocktails, and even has a nightclub on the 2nd floor complete with a state-of-the-art retractable roof so you can sip while tap dancing under the stars. 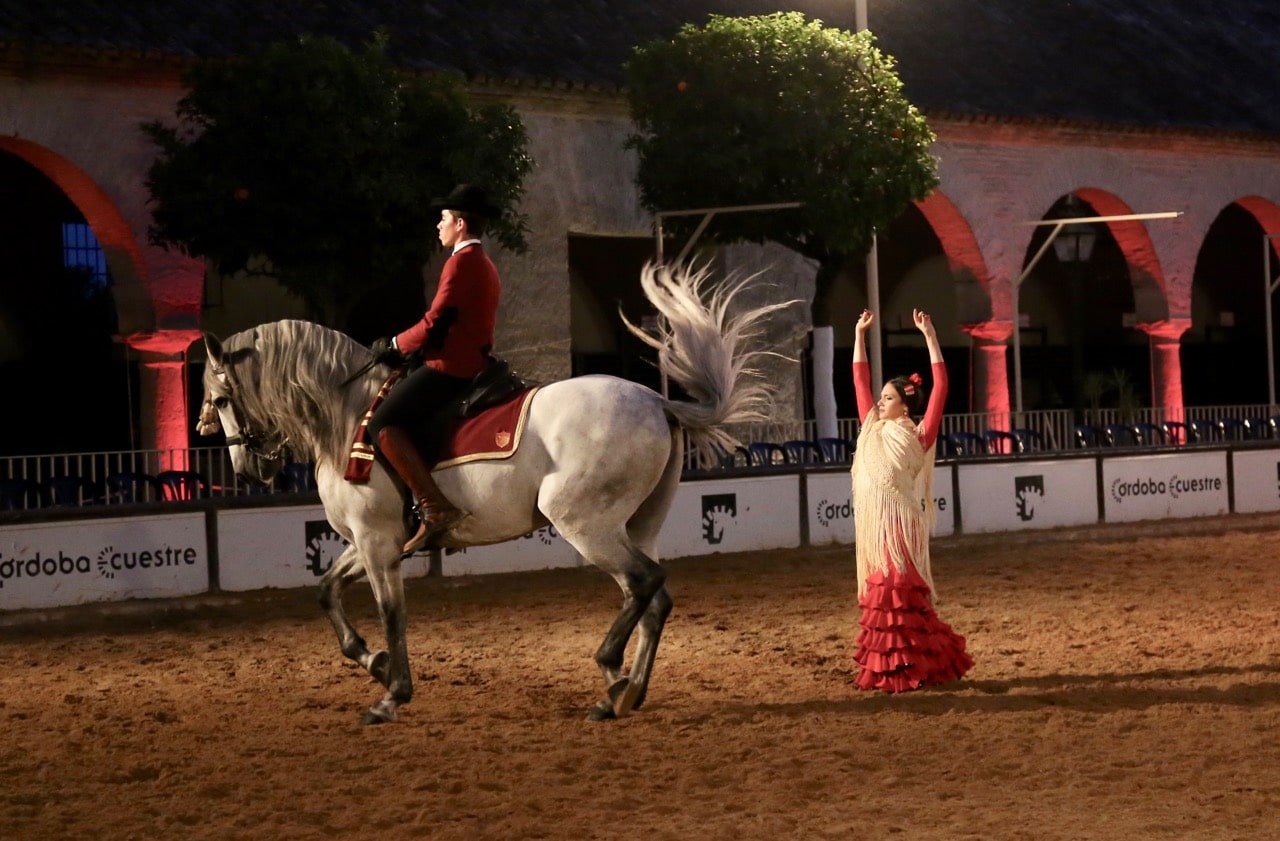 In 1570, Philip II commissioned the monumental Royal Stables because he loved horses, and wanted to oversee the creation of the world’s best breed: the Andalusian horse. The Spanish thoroughbred was a very popular riding horse and soon became a striking symbol of the Spanish empire. Today Cordoba’s Royal Stables have been transformed into a theatrical stage. Each night equine enthusiasts sit in the stands sipping glasses of champagne while a parade of Andalusian horses dance with glee. The 90 minute performance is accompanied by a dramatic score with its most memorable moment being an intimate dance performed between a perfectly quaffed horse and flamenco dancer. 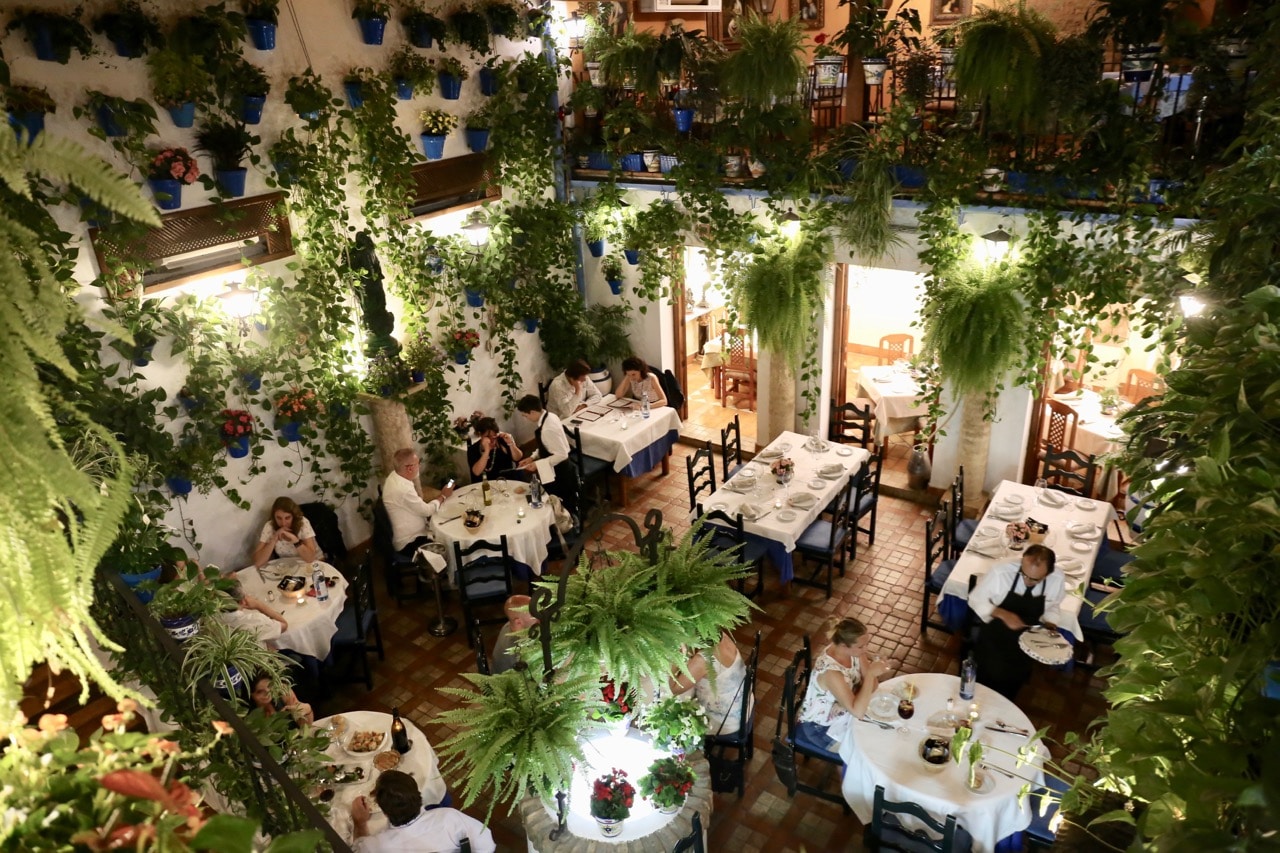 Located a short stroll from the Royal Stables, Puerta Sevilla offers classic Andalusian fare inside a 200 year old manor house. The restaurants design draw is its pretty patio, full of flowers, ferns and potted plants. If you’re keen to sample through Cordoba’s classic culinary offerings be sure to order the chef’s salmorejo, oxtail, fried eggplant with molasses, and crispy flamenquin. 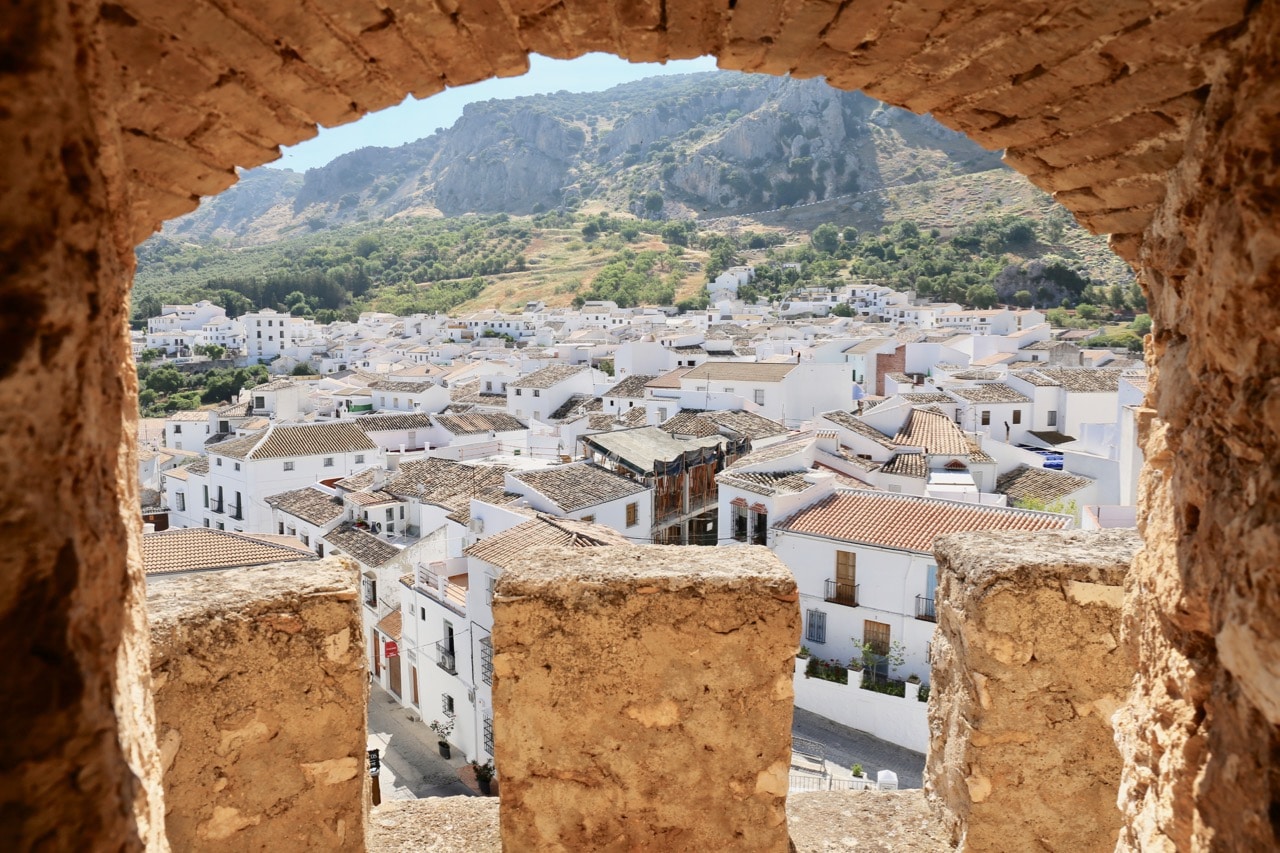 One of Andalucia’s prettiest villages, Zuheros is located directly in between Cordoba and Granada, offering road trippers a perfect spot to stop and explore when driving between the two city’s. Set on a picturesque pinnacle, Zuheros’ castle is of 9th-century Moorish origin, but most of what survives today is from the 13th and 14th centuries. The castle is small but after marching up its staircase you’ll enjoy jaw-dropping panoramic views. 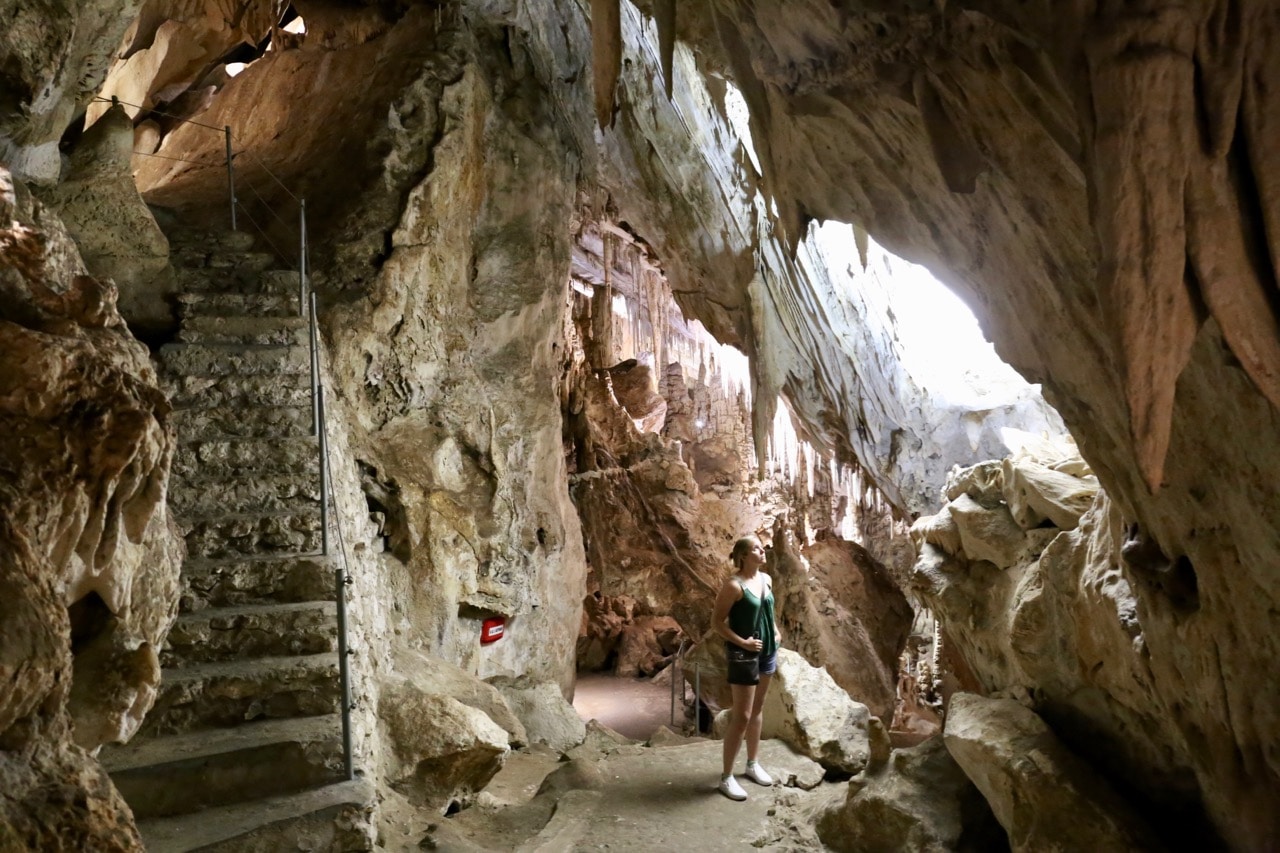 The Cave of Bats

Located a short 4km drive from Zuheros is The Cave of the Bats. Located on the edges of Sierras Subbeticas Natural Park, the underground cave system is internationally renowned for its unique rock paintings and significant archaeological remains dating back to Neolithic times. Burial remains discovered in the cave show evidence of human occupation dating back to 4300 BC. Enjoy a guided tour and you’ll also marvel at spectacular rock formations featuring stalagmites, stalagtites, underground lakes and caverns. 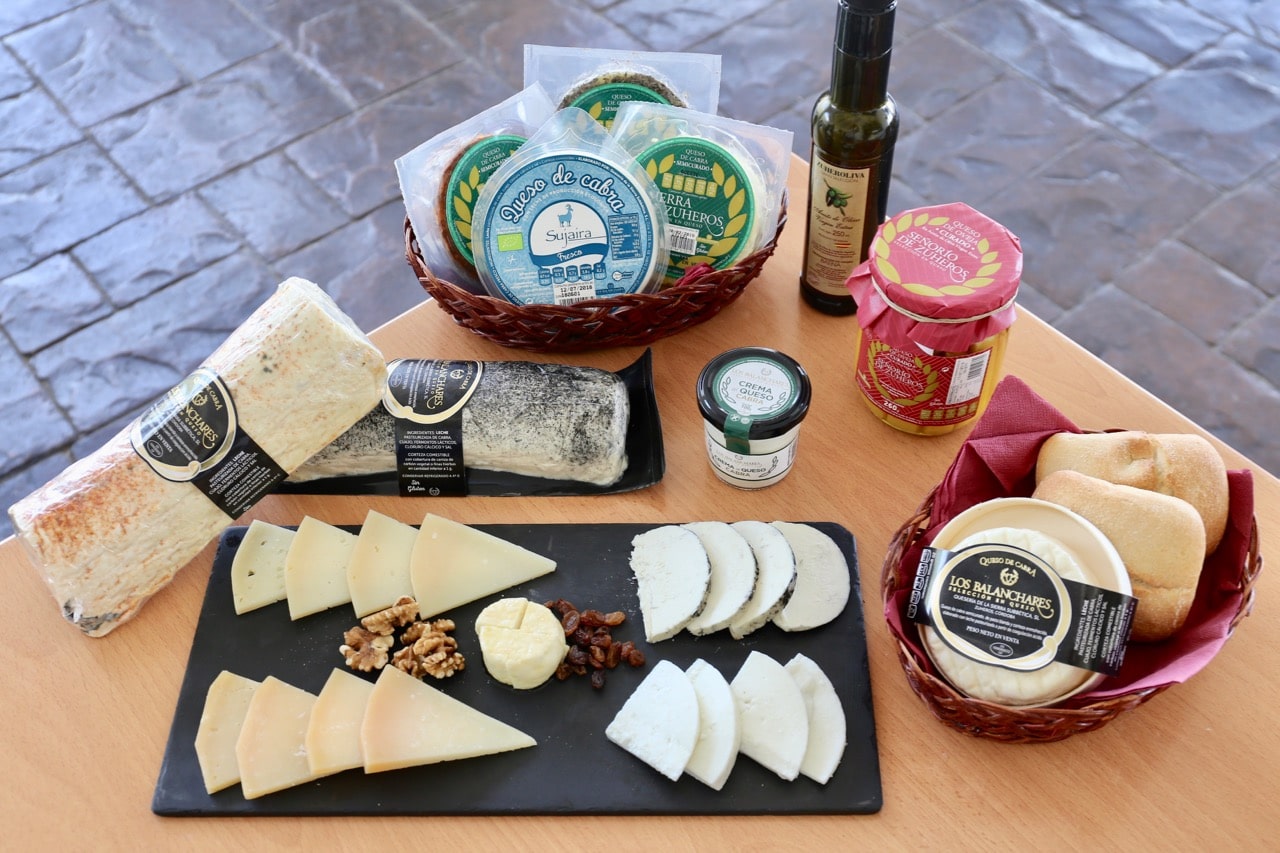 Located on the outskirts of Zuheros, Los Balanchares has been operating as an award winning cheese factory since 1995. Considered to be Andalucia’s most famous fromage, Los Balanchares produces an exceptional line of products from fresh sheep and goats milk. Visit the factory and you’ll find a delicious fully stocked gift shop as well as a restaurant where you can sample through Los Balanchares finest cheeses.