Ibiza is a small island, the nearest of the Balearics to the coast of Spain, and was largely unknown and untouched by tourism until the 1960s, when it suddenly appeared in Europe’s holiday brochures. There is still a curious, indefinable magic about Ibiza town and the island has not lost its character.

The countryside, particularly in the north, is a rural patchwork of groves of almonds, olives and figs, and wooded hills. Ibiza town, on the other hand, retains the air of a 1950s Spanish provincial borough. At once a package tour paradise, hippie hideout and glamour hot spot, this is one of the Mediterranean’s most mythical destinations. And for gays keen to explore beyond her flashy DJ-dotted nightlife there’s plenty of heart, history, and hedonism.

Things To Do In Gay Ibiza 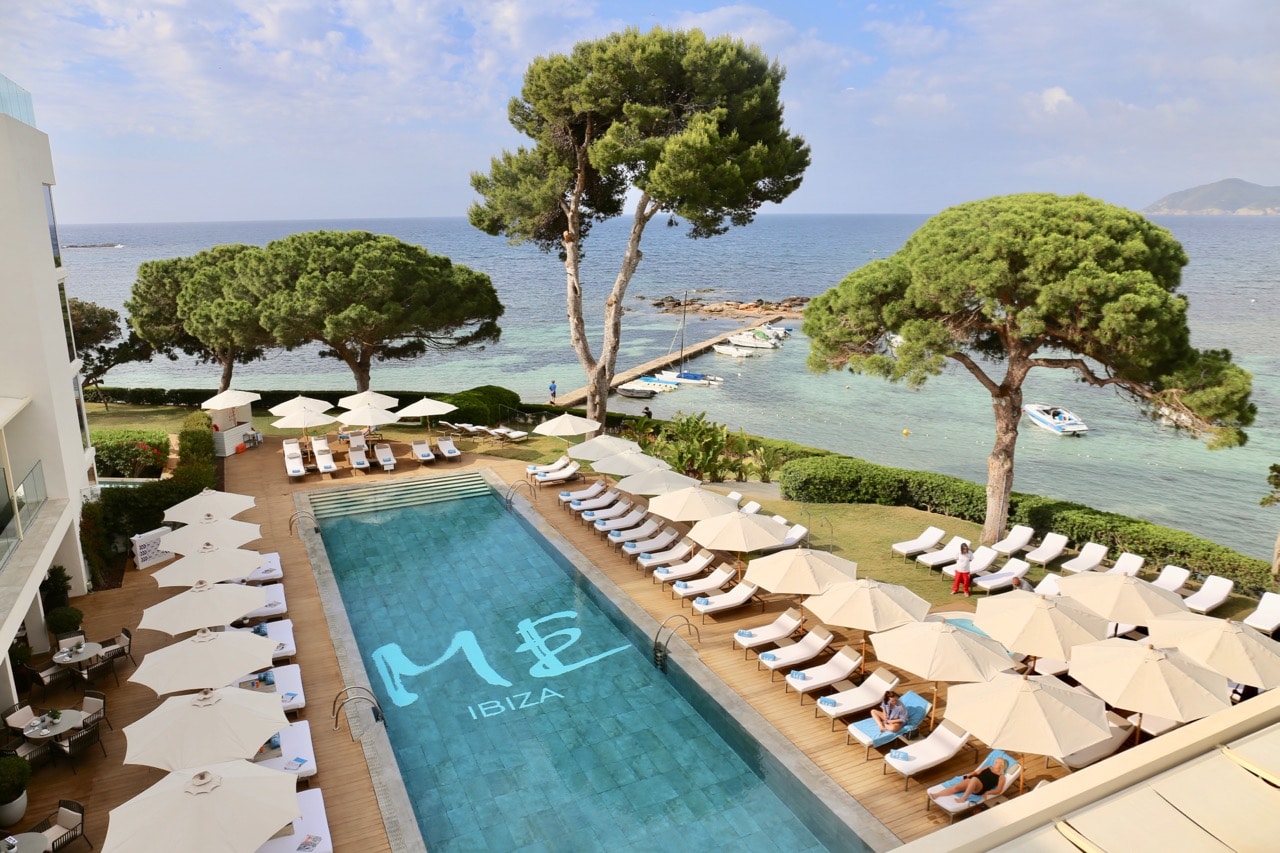 Located just outside of Santa Eulalia, a quiet town on the island’s east coast, ME Ibiza is a sophisticated beachside retreat. Nestled in a secluded bay with direct yacht access, this boutique luxury hotel enjoys an almost private feel, perfect for those seeking both relaxation and play. With spacious bedrooms and deluxe suites showcasing a minimalist, Ibiza-inspired decor, each featuring bright, simply designed furnishings with vibrant local touches, it offers a truly indulgent experience for the contemporary traveler. The highlight of your stay is likely to be breakfast each morning, which features a decadent buffet where slices of thick chocolate cake are best paired with a sparkling champagne mimosa. 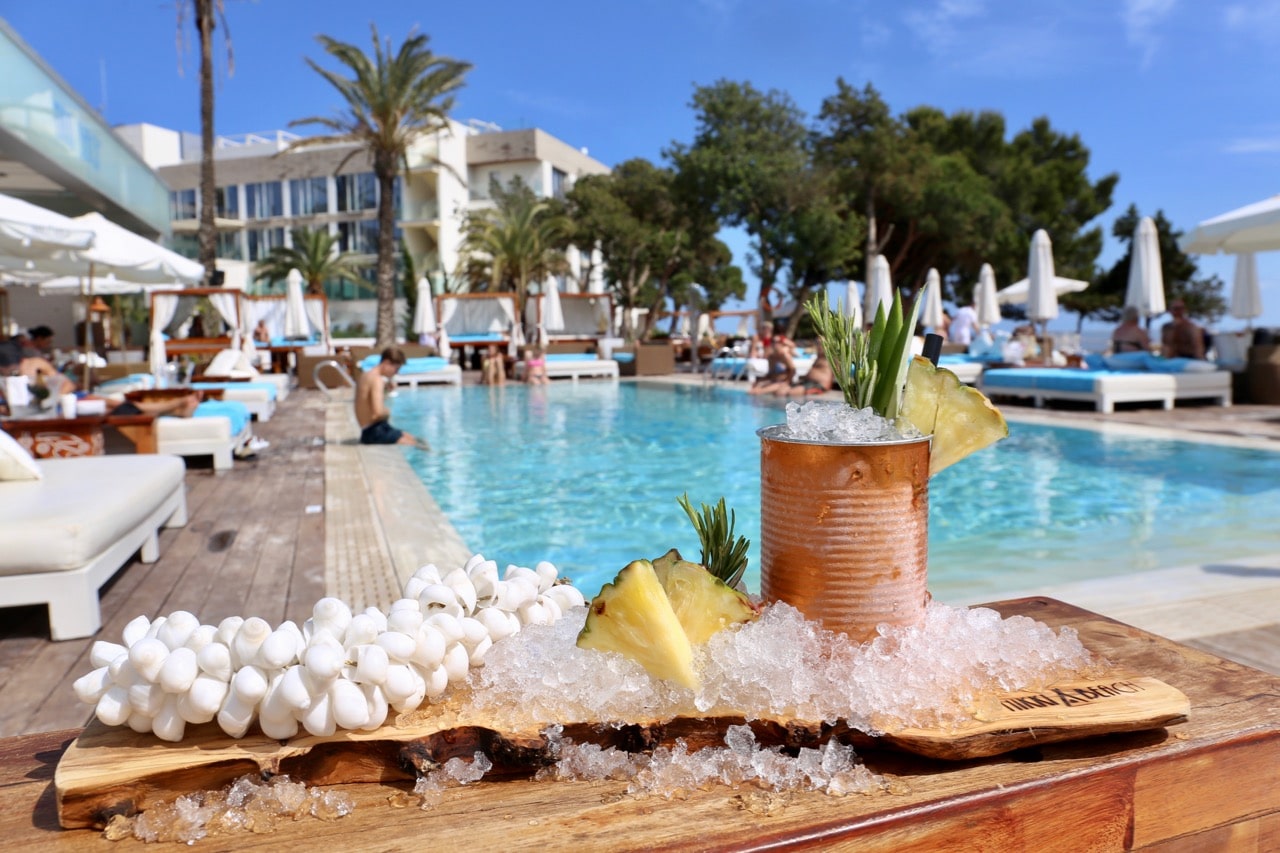 I was first introduced to the party-hearty Nikki Beach brand while covering the Toronto International Film Festival as they host an annual event series at The Spoke Club. With lavish beach club properties in Miami, Saint Tropez, Koh Samui, Monte Carlo, and Dubai, Nikki Beach has become synonymous with partying on the playa. For hotel guests at ME it’s handy that Nikki Beach Ibiza shares the same beach. Skip across the red carpet and plop yourself in a cabana by the pool and you’ll find sun soakers dressed to the nines while swaying to addictive DJ beats and thirst quenching on a choir of craft cocktails. 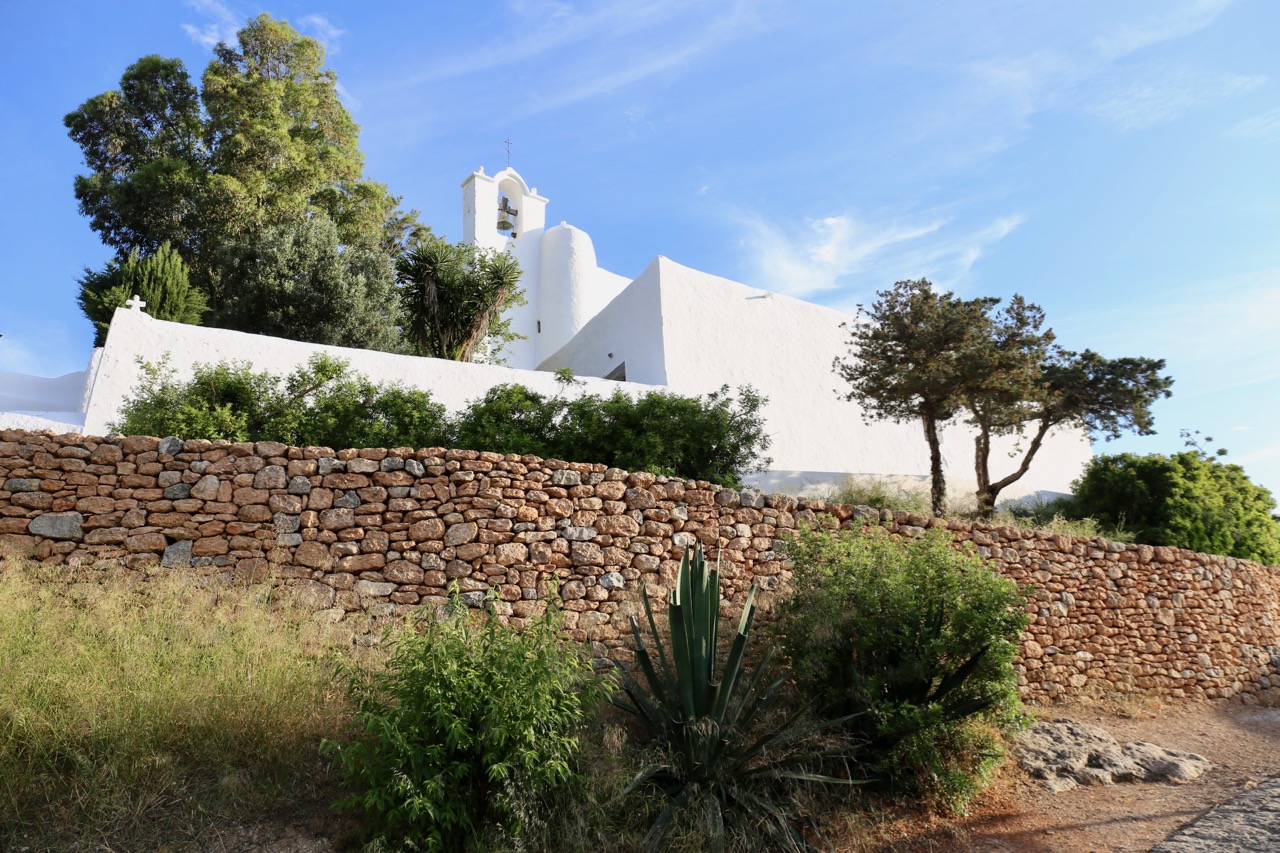 Puig de Missa is one of Ibiza’s most photographed churches, a whitewashed building which sits perched over the town of Santa Eulària des Riu. Dating back to the 16th century, its structure is made up of a single barrel domical vault with four chapels at each side. Its semi-circular tower was equipped with weapons until the middle of the 19th century to protect locals from the constant fear of pirate attacks.

14 Things To Do On a Weekend Away in Cordoba

10 Things To Do on a Weekend Away in Granda

10 Things To Do On a Gay Beach Holiday in Malaga

Things To Do in Majorca 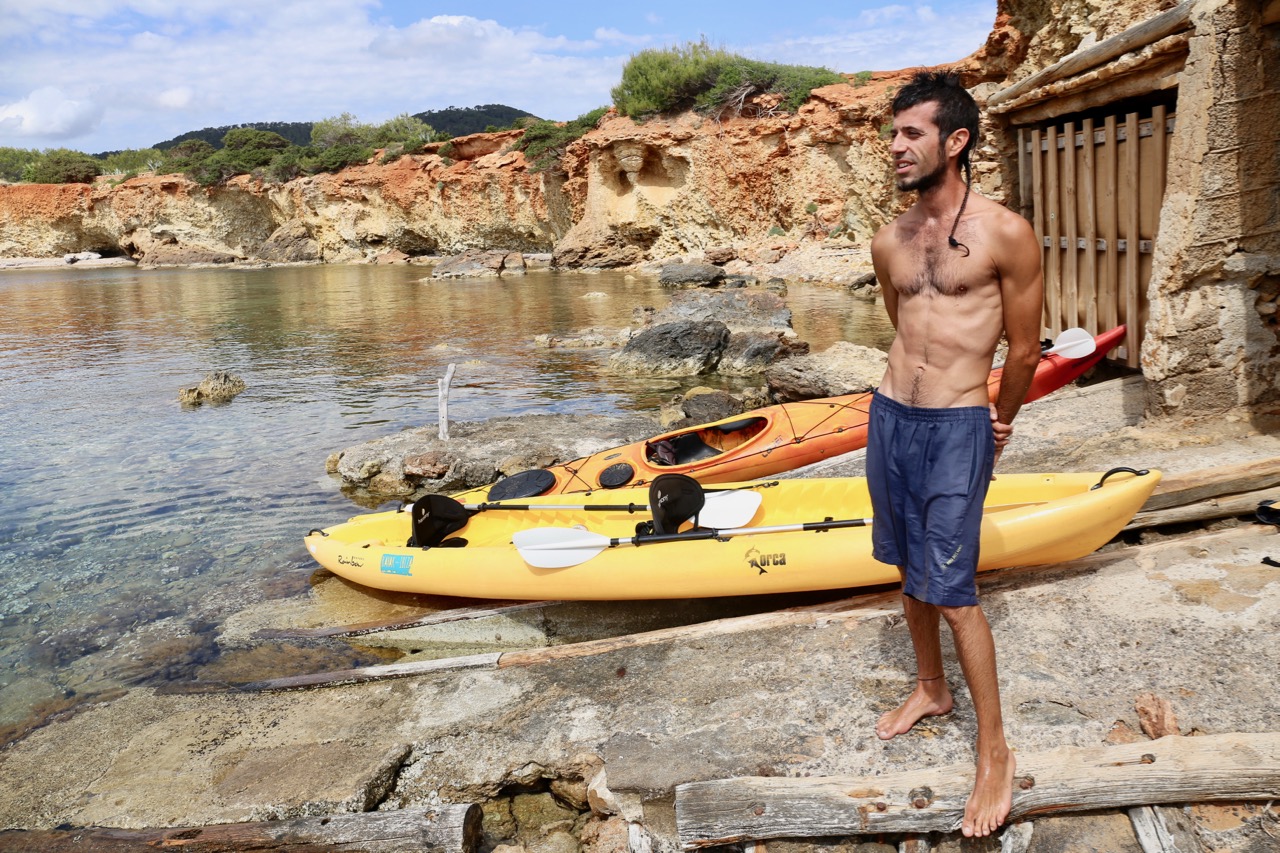 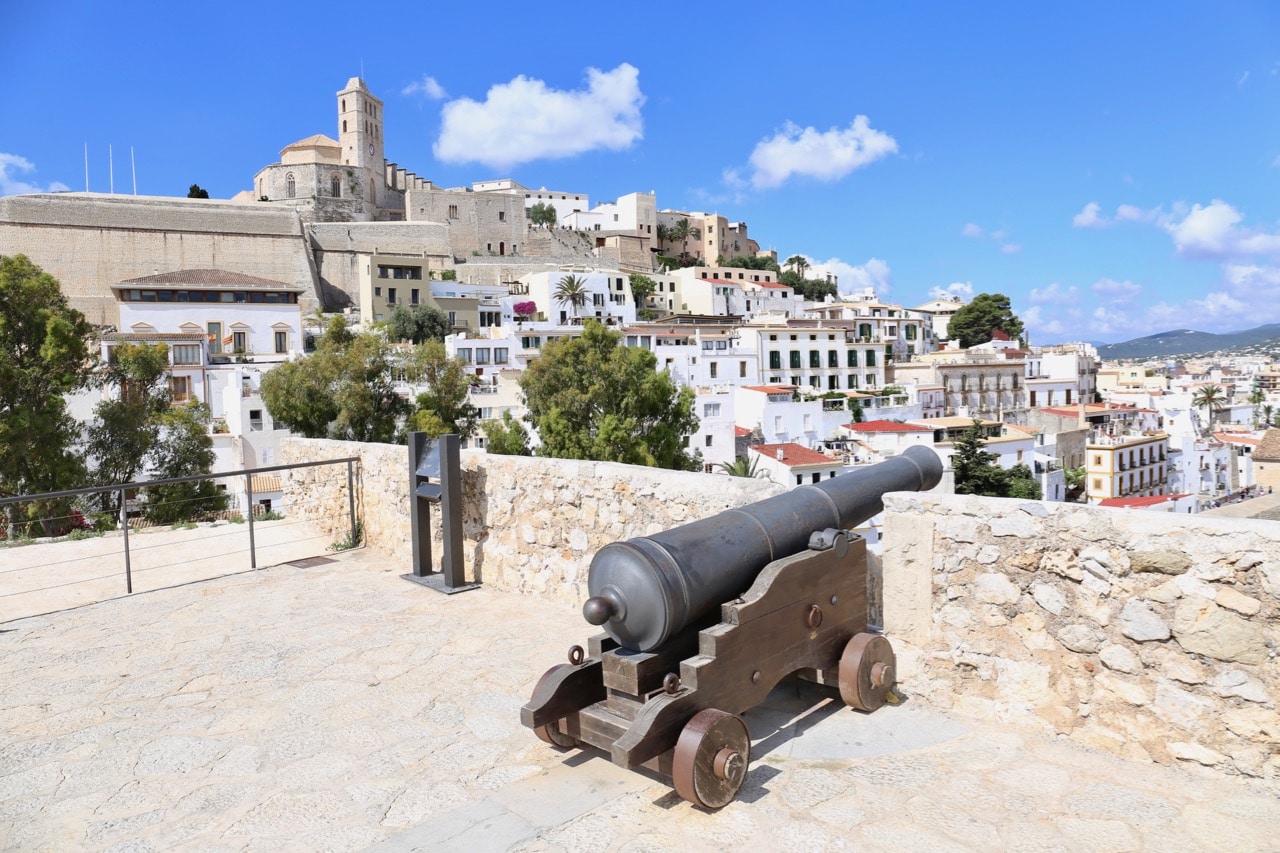 Dalt Vila, Ibiza’s Old Quarter, is a miniature citadel guarding the mouth of a circular bay. The Portal de ses Taules, a magnificent gateway in the north wall of the 16th-century fortifications, carries the finely carved coat of arms of the kingdom of Aragon, to which the Balearic Islands belonged in the Middle Ages. Inside the walls you’ll find works by Erwin Bechtold and Barry Flanagan on display at the free Museu d’Art Contemporani and the island’s famed cathedral, a 13th-century building with 18th-century additions. 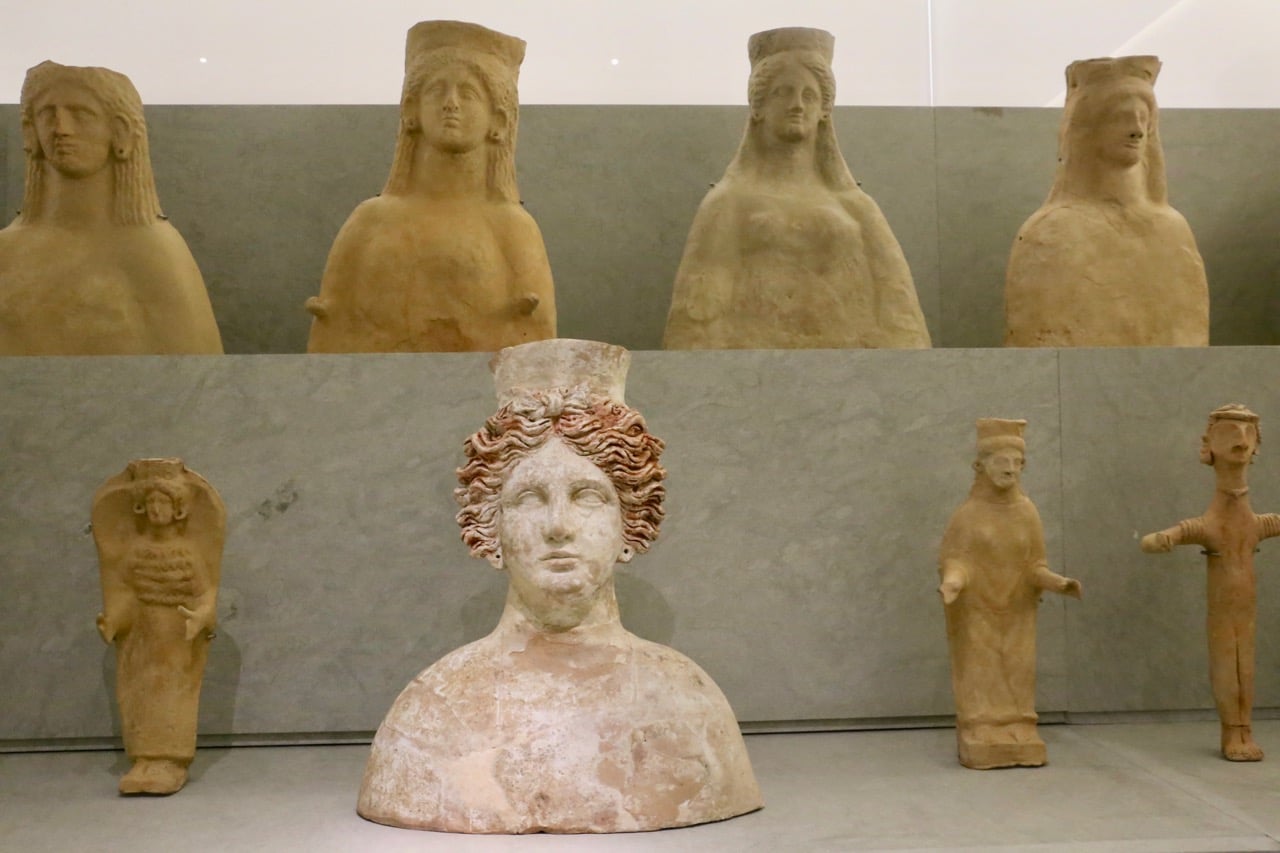 Under the Carthaginians, the soil of Ibiza was considered holy. The citizens of Carthage deemed it an honour to be buried in the Necropolis Punica del Puig des Molins. This fascinating ancient cemetery dates back to 600 BC, and is considered to be the largest necropolis in the world as it houses over 4,000 tombs. Be sure to make time to explore the petite museum as it displays treasures discovered in the burial chambers, including jewellery, mirrors, painted ostrich eggs, and beautiful busts. 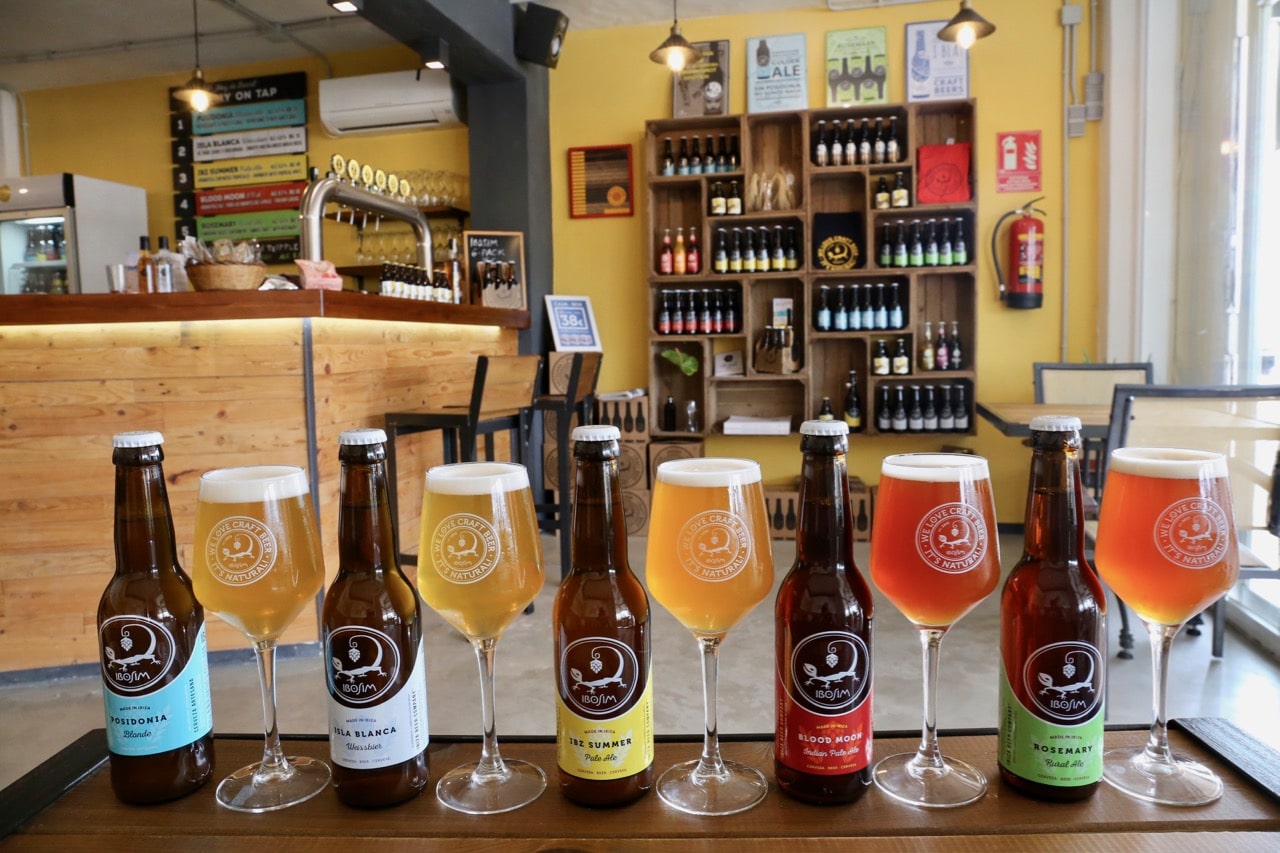 Beer fans heading to Ibiza for the first time will be delighted to know that the island now has its first craft brewery. Located on the islands westerly shores Ibosim produces a parade of flavourful brews to satisfy hop heads looking for more than a mass produced pilsner to glug on the beach. If you’re in the area feel free to pop by the brewhouse and sample through a flight of fresh brews with highlights including Isla Blanca Weissbier, Blood Moon IPA, and the locally inspired Rosemary Rural Ale (the fragrant herb grows wild across the island). 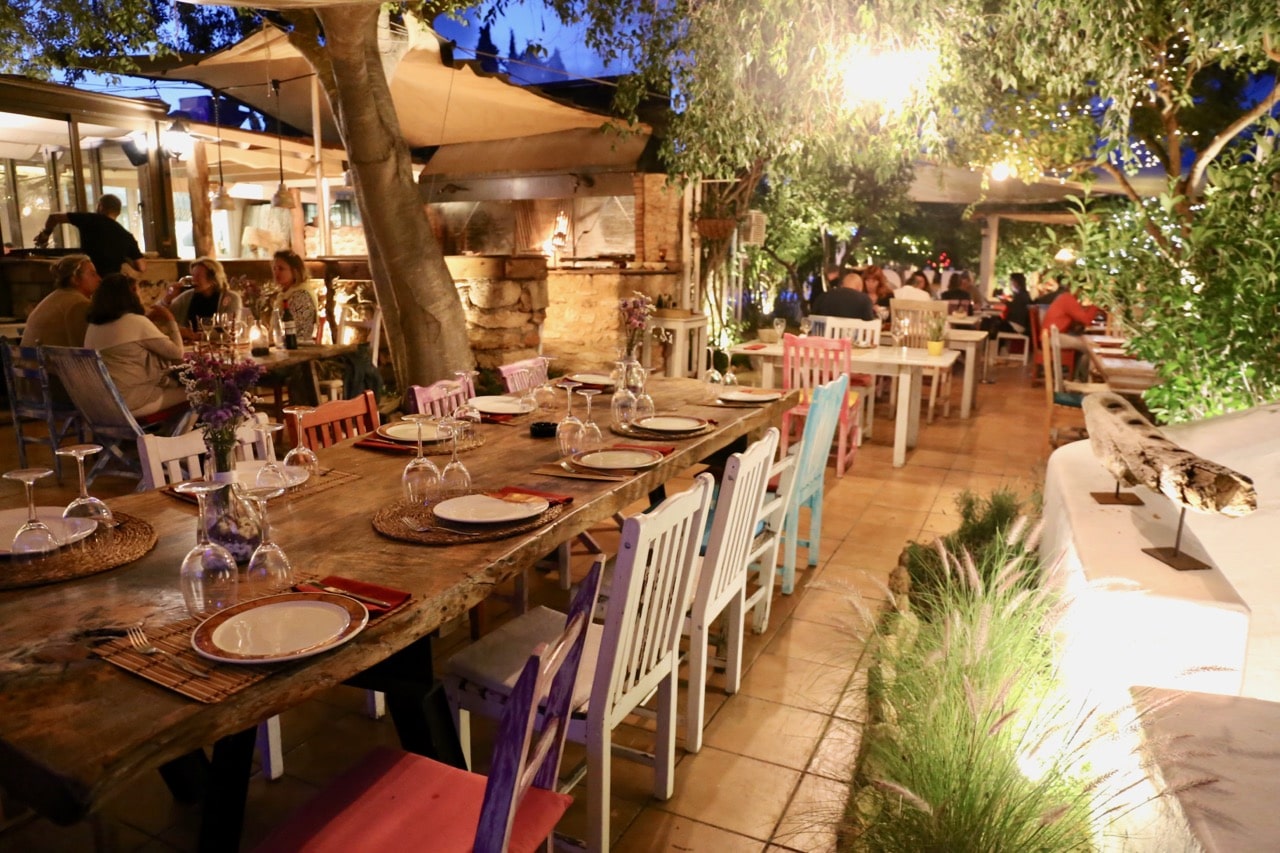 If you’re looking to tuck into an al fresco farmhouse feast book yourself a table at Es Caliu. This traditional Ibicenco restaurant is easy to find as there is a windmill outside which is connected to an ancient waterwheel on the restaurants terrace. Skip past bright bougainvillea and you’ll find a rustic restaurant interior featuring an open concept kitchen where chefs can be seen taming flames on a meat-lovers barbecue. 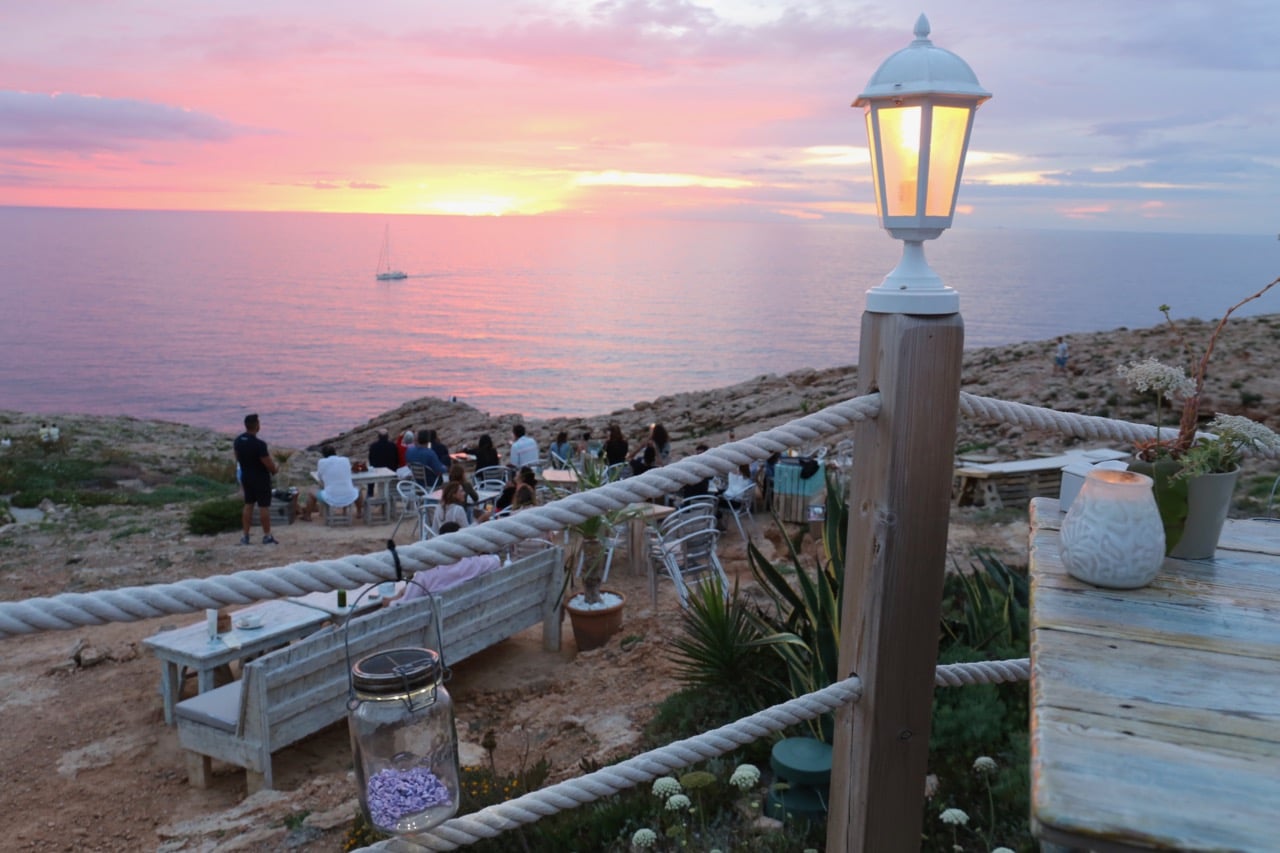 If you’re looking to romance your sweet pea at dinner while sipping sangria and watching the sunset splash across the horizon be sure to arrive early to grab a seat at the wildly popular La Torre Restaurant.

Located perched atop the craggy cliffside of Cap Negret on Ibiza’s west coast, La Torre’s menu features classic Spanish tapas served alongside a creative continental menu. Enjoy a flavour tour of the world while nibbling on Spanish croquettes, Italian burrata, a spicy Thai shrimp salad, and a Middle Eastern dip platter featuring creamy hummus and baba ganoush. Moments before sunset the resident DJ plays ambient music to get everyone in the mood and once the sun finally disappears across the horizon the entire restaurant roars with applause. 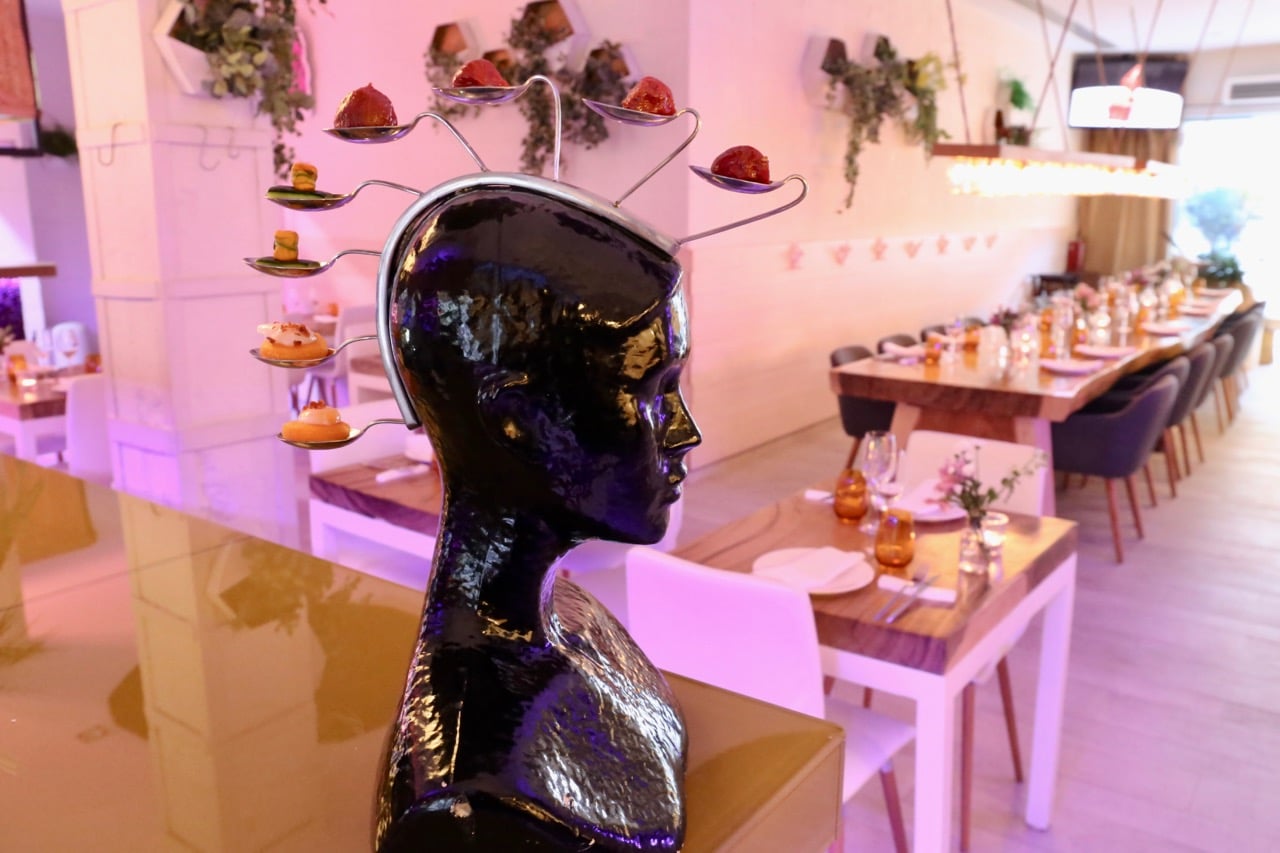 For those looking to enjoy an inspiring and creative outside-the-box fine dining experience Sa Brisa Gastrobar in Ibiza Town serves a parade of pretty plates presented with eye-catching pomp and panache. Start your journey by sipping through a gorgeous berry muddled jug of sparkling cava sangria and spend the next two hours enjoying culinary theatrics featuring a mannequin head adorned with tiny tasty spoons and a severed hand gently holding a bouquet of savoury churros. 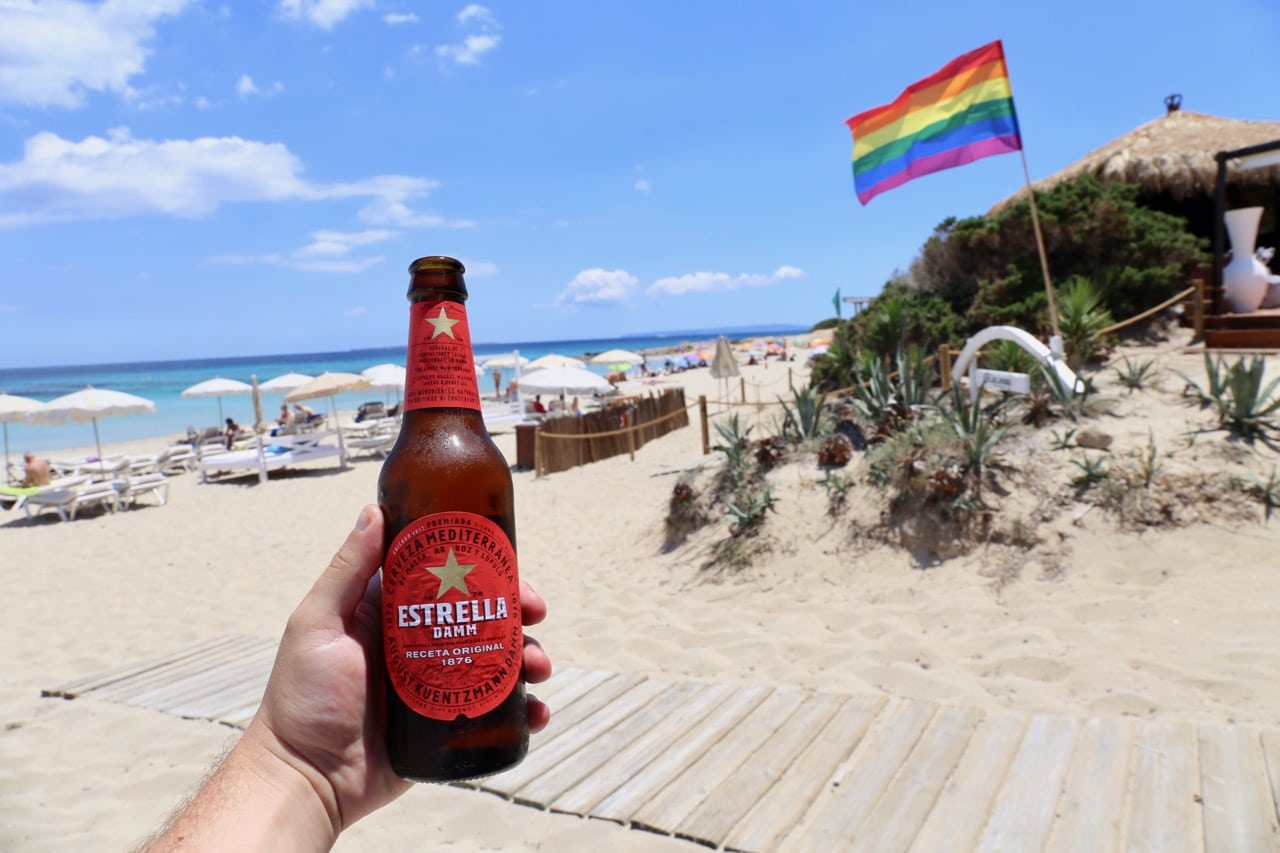 Ibiza is considered one of the top LGBT holiday beach destinations in Europe and there’s no better place to enjoy a sun-soak under a friendly rainbow flag then at the secluded, clothing optional Chiringay Beach. If you’re keen to spend the day slip into your speedo and drive to the southern tip of the island and park your car before enjoying a 20 minute walk through a rustic pine forest. Once you’ve arrived at Chiringay you’ll find a breezy restaurant, a choir of umbrella topped beach chairs, and warm shallow waters perfect for cruising. It’s the perfect spot in Ibiza to suntan while sipping gay cocktails. 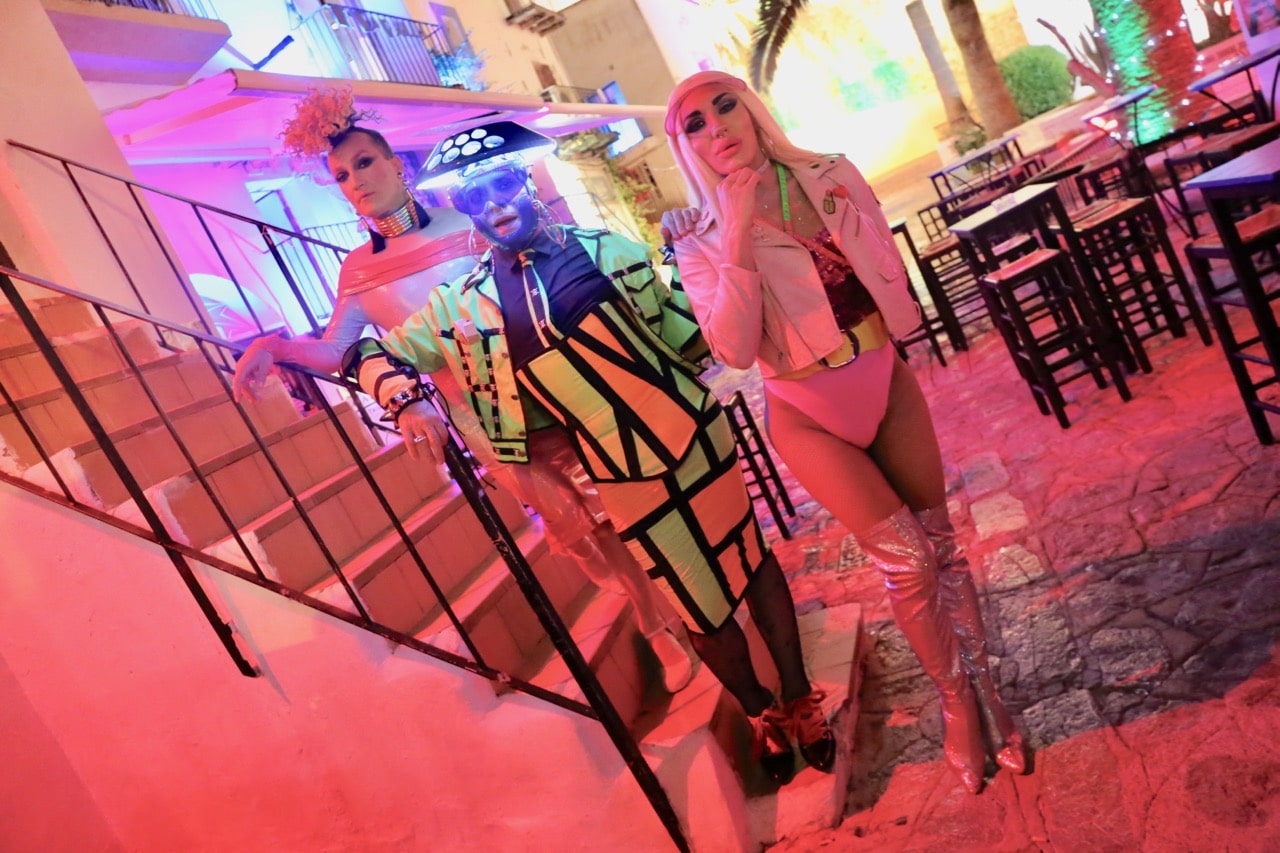 Ibiza’s gay nightlife is a hoot and a holler. I was amazed at the sheer number of gay clubs and drag bars, all of which are located on one rainbow flag waving, winding, pedestrian street in Ibiza Town. You’ll find bartenders serving cava in speedo’s, sunburnt bears nursing ice cold cerveza and glamorous drag queens mix and mingling. The island’s most iconic bar is Mona Lisa, a hub for gay tourists thanks to the video installations splashed on the buildings exterior (super camp vintage Disney snip-its from Snow White) and outrageously attractive servers and bartenders (who are obviously speedo models and gym rats by day).