Tater Tot Poutine is our favourite easy appetizer to cook at home when having a craving for classic Canadian comfort food.

Our homemade Quebec-inspired poutine recipe is prepared with baked McCain Tater Tots and ready to serve in under 40 minutes!

The comfort food rose to culinary fame in Quebec during the late 1950s. Its origins are uncertain as there are several competing claims on who invented the dish.

Today, poutine is a celebrated symbol of Quebecois culture, long associated with Quebecois cuisine. It can easily be found throughout the province of Quebec, from cheap and cheerful roadside stands to elegant award-winning fine dining restaurants.

It’s safe to say poutine has now officially gone global as it’s available across Canada, America and is even served at restaurants with large Canadian expat communities like the United Kingdom, South Korea, Costa Rica and Dubai.

Travel to Quebec by Making Tater Tot Poutine at Home

As a professional food and travel journalist based in Toronto, I’ve had the opportunity to feast on poutine from traditional markets to award winning restaurants.

For over two decades I’ve traveled across Canada in search of the best poutine via stops in British Columbia, Alberta, Saskatchewan, Manitoba, Ontario, Nova Scotia, Prince Edward Island and Newfoundland.

Canadian chefs from coast to coast have developed their own unique poutine recipes with toppings that reflect each provinces unique food culture. In Alberta you’ll find plenty of poutine topped with roast duck or grilled beef and in the Maritimes they love topping poutine with local lobster.

In an effort to taste the best poutine in Canada I ate my way through Montebello, Montreal, Charlevoix, Quebec City and Mont Tremblant in the province of Quebec.

Most restaurants in Quebec serve poutine in its most classic and traditional form, like the celebrated Schwartz’s Deli in Montreal.

Many Quebecois chefs are having fun by playing with new poutine ingredients. Chic Shack in Quebec City tops its poutine with Smoked Meat, a bistro in Montebello piles high with duck confit and a microbrewery in Charlevoix serves cheesy gravy fries with craft beer soaked brisket. I’ve also eaten very fancy poutines topped with black truffle, foie gras or substituted with decadent brie or blue cheese instead of traditional curds.

Our Tater Tot Poutine recipe using McCain Tater Tots is a great way to share your love of Quebec’s famous comfort food from your own home. Our easy recipe uses an oven rather than deep frier so saves you a few calories along the way!

I’ve been obsessed with poutine since I was a little kid. I come by it honestly since my family is part French Canadian and we live in Ontario right next door to Quebec.

Back in the 80s and 90s you’d find poutine at fast food restaurants like Harveys, A&W and Swiss Chalet. The dish is enjoyed all year round but I most associate it with the colder months of the year when they’re sold at Fall Fairs and at winter at ski resorts.

Ordering a large poutine was always a special occasion and decadent affair in my family. My dad would usually order a large bowl of poutine after the four of us spent a day skiing on the slopes. We’d all grab tiny white plastic forks and dig into the steaming hot mess of French Fries, gravy and melted cheese.

I’ve always eaten poutine as if it were a bowl of spaghetti. The key is to jab your fork into the fries, slowly twist so the melted cheese wraps around the fried potatoes and then jab around the bowl to ensure everything is covered in gravy.

This Tater Tot Poutine recipe is so easy to make at home you’ll see why we’ve fallen in love with hosting gravy and cheese slathered crispy potato potluck parties!

What Are Tater Tots?

So if classic poutine is made using traditional French fries what are tater tots and why do we use them in our recipe?

Tater tots are grated potatoes formed into small cylinders and deep-fried, often served as a side dish. “Tater” is short for potato.

The name tater tot is a registered trademark of the American frozen food company Ore-Ida, but is often used as a generic term. They were invented in 1953 by the company’s founders, who were trying to figure out what to do with leftover slivers of cut-up potatoes. They chopped up the slivers, added flour and seasoning, then pushed the mash through holes and sliced off pieces of the extruded mixture (like fresh pasta). This is how Tater Tots came to be!

We like using the Canadian brand McCain, which trademarks its frozen tater tots product as McCain Tasti Taters. The potato morsels are quickly deep fried in the factory then frozen so you simply have to reheat them in your oven to crisp them up before serving.

Here are some additional creative ideas on what to top your poutine with to make it into a protein-packed meal:

What To Serve with Tater Tot Poutine

I usually eat poutine as an upgrade to my fries when having dinner at a burger joint or as a late night midnight snack.

If you’re hosting a Quebec-inspired dinner party or potluck you might want to serve Tater Tot Poutine as a side dish alongside dishes like tourtiere, creton, pea soup or savoury crepes. 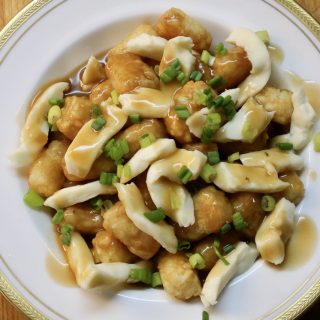