Spicy Pork Bibimbap is one of our favourite Korean recipes to cook at home in the Fall and Winter.

Bibimbap is one of Korea’s national dishes, literally translating to “mixed rice.”

Our version of the classic recipe is topped with spicy Korean minced pork. It’s quick and easy to make, ready to serve in under 1 hour.

Bibimbap is one of Korea’s national dishes, literally translating to “mixed rice.” The name in English is often romanized as bi bim bap or bi bim bop.

The origin of the many names of bibimbap come from its hanja or Chinese based records. Originally appearing in yokjokumun of kijae-jabki by Park in the end of 16th century. The historical record associated original bibimbap recipes as hondonban, which later went on to become bubuiembap nearly 200 years later.

The first known recipe for bibimbap is found in the Siuijeonseo, an anonymous cookbook from the late 19th century. In the late 20th century, bibimbap started to become widespread in many countries in the West, due to its simplicity, cheap cost, eye-popping appeal and yummy taste.

Many airlines connecting to South Korea via Incheon International Airport began to serve bibimbap, and it was accepted more globally as a popular Korean dish. Bibimbap has also been described as a symbol of the Korean culture to non-Koreans and became especially trendy during the 2018 Winter Olympics in PyeongChang.

The term “bibim” means mixing various ingredients, while the “bap” noun refers to rice. Bibimbap is an inherently customizable food with a variety of ingredients that can be used in its creation. It came from early rural Koreans taking leftover vegetables, sometimes having meat, with rice and mixing them in a bowl. This was cheap and didn’t require all of the time and space of a traditional meal.

Bibimbap is served as a bowl of warm white rice topped with namul (sautéed and seasoned vegetables) and kimchi (traditional fermented cabbage) and gochujang (chili pepper paste), soy sauce, or doenjang (a fermented soybean paste). A raw or fried egg and sliced meat (marinated beef or pork) are common additions.

The dish is traditionally served in a hot stone bowl and stirred together thoroughly just before eating using chopsticks and a spoon.

Today bibimbap is one of the most affordable dishes to eat in Korea. Vegetarian versions of the dish can often be found at hole-in-the-wall restaurants for under $2 USD.

Our favourite rendition of classic Korean rice recipe is Spicy Pork Bibimbap, which we’ll show you how to cook today!

Travel to Korea by Cooking Pork Bibimbap at Home

In Korea, I’ve spooned through many steaming bowls of Spicy Pork Bibimbap at restaurants in Seoul, Suwon, Busan, Samcheok, Jeju and even the North Korean DMZ.

My first time eating bibimbap was almost immediately after getting off the plane in Seoul. I spent my first week in Korea attending intensive teacher training classes. Whenever we’d break for lunch they’d serve Pork Bibimbap with a few noodle dishes and banchan.

After spending a year living in Korea and traveling across the country I ate hundreds of bibimbap Korean rice bowls.

After enjoying your first few spoonfuls, you’ll realize why a sizzling bowl of traditional Pork Bibimbap is a must-try when visiting South Korea!

If you live in a large city in Canada or America you’ll likely have access to a local Korean restaurant that serves traditional Pork Bibimbap.

Haven’t traveled to Korea before? It may be helpful to first sample authentic Spicy Pork Bibimbap at a local restaurant to better understand how it is served. You’ll get an idea for the ideal spice level, number of vegetables to serve on top of each bowl and the perfect rice to minced pork ratio.

You’ll also find inspiration on what to pair with Pork Bibimbap including Korean inspired dishes like Gochujang Chicken Wings, Ssamjang Chicken and Jjajangmyeon.

My parents flew to Asia to visit me on holiday during my 12 months in Seoul. Before landing at Incheon they visited Tokyo and Kyoto in Japan.

They had never been to a Korean restaurant at home in Toronto or Oakville before so every dish was a surprise to their taste buds.

It’s no secret that my dad is a picky eater so I was a little nervous about him finding commonplace menu items like raw fish, spicy soup and fatty samgyeopsal to be unappealing.

Thankfully my parents both fell in love with Pork Bibimbap. They ordered the dish many times during visits to Insadong and Dongdaemun. They enjoyed mixing together the perfectly steamed rice, fresh vegetable toppings, oozing fried egg and flavourful pork.

Korean Bibimbap is the ideal “kitchen sink” recipe to prepare last minute for dinner when trying to use up old vegetables in your fridge and ground pork in the freezer.

Kimchi, a fermented cabbage condiment in Korea, is considered one of the healthiest foods on earth. The nutrient dense food features vitamin A and C, 10 different minerals and 34 amino acids.

This healthy Pork Bibimbap recipe is quick and easy to make at home. We’ve included a few tips for first time bibimbap cooks!

How To Make Vegetarian or Vegan Bibimbap

Making a vegetarian or vegan bibimbap is simple! Just leave out the meat and egg.

A few vegetable toppings taste great and tofu is a popular meat substitute. Pan-frying the tofu enhances the flavour of the tofu and gives it a desirable chewy texture

If you have homemade vegetarian or vegan kimchi, slice it up as it is a nice addition to a healthy Korean rice bowl.

What To Serve with Spicy Pork Bibimbap

There’s nothing more comforting on a cold day then cozying up to a bowl of Spicy Pork Bibimbap.

If you’re hosting a large dinner party you might want to serve small bowls or Pork Bibimbap as an appetizer before serving heartier mains.

If you have leftover Bibimbap you can store it in the fridge in an airtight container for 2-3 days. We suggest storing all of the prepared ingredients in separate small Pyrex containers so you can assemble a few Korean rice bowl for lunch or dinner later.

To reheat simply zap it in the microwave or warm the ingredients in the oven. 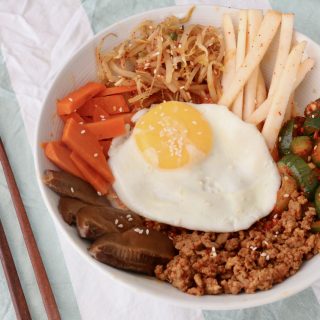