Our quick & easy Afghan Kebab recipe is my family’s favourite Middle Eastern meat dish to cook on the barbecue in the summer and fall.

Minced beef is blended in a food processor with fresh herbs and spices then formed onto a wooden skewers and grilled to perfection. Beef Kafta is best served with flatbread like pita, fragrant rice, garlic sauce and a fresh herb-flecked Middle Eastern salad.

What Is Afghan Kebab?

Kebabs are part of a Middle Eastern family of cooked meat dishes. There are several variable spellings for the dish as it’s so popular around the world such as Kebab, Kafta, Kofta and Kefta.

In most of the English speaking world, kebab is usually understood to be the traditional shish kebab or shashlik – small cubes of meat cooked on a skewer. Outside of North America they are better known as gyros, the most recent fast-food being doner kebab, now dubbed Berlin’s signature street food.

In contrast, in the Middle East, Asia and across the Muslim world, a kebab is any of a wide variety of grilled meat dishes. Some are derived from the authentic Middle Eastern kebab, while many have different regional names in local languages, such as Chinese Chuan and peanut satay in Indonesia, Malaysia and Singapore.

Egyptian Kofta feast enjoyed at sunset in Muskoka after a delightful day spent soaking in Lake of Bays!

Kebabs by definition consist of cut up or ground meat, sometimes with vegetables, and various other accompaniments according to the specific regional recipe. Although kebabs are typically cooked on a skewer over a fire or barbecue, some authentic kebab recipes are baked in a pan in an oven or even prepared as a stew such as tas kebab.

The traditional meat for kebabs is mutton or lamb, but regional recipes may include beef, goat, chicken and fish. Because of the dishes Muslim culinary roots, you’ll rarely see kebab prepared with pork due to religious prohibitions.

Afghan Kebab is traditionally prepared in the kofta or kafta style. Rather than skewering chunks of meat, Afghan cooks prepare a minced meat paste with vegetables, herbs and spices. The fragrant mixture is then moulded onto skewers by hand and grilled on a barbecue or open flame.

Evidence of early human use of fire and cooking in the Middle East dates back as far as 790,000 years, and prehistoric hearths, earth ovens, and burnt animal bones were spread across Europe and the Middle East by at least 250,000 years ago.

The method of cooking smaller chunks or slices of meat on skewers has a long history in North Africa and the Middle East, where it would be practical in cities where small cuts of meat were available in butchers’ shops, and where fuel for cooking was relatively scarce, compared to Europe, where extensive forests enabled farmers to roast large cuts of meat whole.

Travel to the Middle East by Making Beef Kafta at Home

For over ten years, I’ve been on the hunt for the best Beef Kafta via adventures that had me zig-zagging through Morocco, Turkey, Egypt, Jordan, Israel and Dubai.

I ate beef kafta with flat bread at a traditional Moroccan riad, Turkish take covered in fresh herbs in Istanbul and Bodrum, memorable late night wrapped meat feast at the luxurious Four Seasons in Amman, tahini drizzled mid-afternoon grilled meat snack at bustling markets in Tel Aviv and Jerusalem and a massive Beef Kafta platter in the middle of the Dubai desert while belly dancers twirled under the night sky.

My most romantic memories eating Afghan Kebab were at celebratory beef kafta feasts inside the bustling market in Cairo and under the twinkle of the night sky on a luxury Nile cruise.

Where To Eat Afghan Kebab

If you live in a large city in Canada or America you’ll likely have access to a local Middle Eastern restaurant that serves authentic Afghan Kebab.

Haven’t traveled to the Middle East before? It may be helpful to first sample Afghan Kebab at a local restaurant to better understand how the dish is served. You’ll get an idea for the desired crispiness of the meat and intensity of spices and herbs. You’ll also find inspiration on what to pair with your grilled beef kafta, such as fresh salads, creamy dips and flat bread.

When my family moved to Oakville the first restaurant we visited was a local restaurant called Agabi. Ranked as one of the best restaurants in Oakville, Agabi, became our family’s go-to Middle Eastern take out joint.

We’ve been eating at Agabi for years and have tasted almost every dish on the menu. Each member of my family has discovered a favourite dish, that we always seem to consistently order.

My father loves the Creamy Chicken, muddled with mushrooms and onions. My mother is a fan of the Lamb Shashlik, grilled to perfection with green pepper and mushroom. My sister always orders the Chicken Pineapple, marinated boneless chicken served with crispy bacon and juicy pineapple. I’ve always had a heart for Agabi’s Afghan Kebab, best served alongside a Greek Salad, aromatic rice and a pungent puddle of Lebanese toum garlic sauce.

After discovering the perfect Beef Kafta at Agabi, my family would always seek out the next best thing. We’ve traveled to Israel, Jordan, Egypt and beyond…always keen to experience a new and fresh take on the authentic Middle Eastern spiced minced meat skewers.

Once you’ve fallen in love with the Middle East’s favourite street food you’ll likely want to find creative ways to include it in your family’s meal plan. Here are our 4 favourite ways to enjoy homemade Afghan Kebab:

Homemade vegetarian toum is easy to make in a blender at home. The sauce is essentially a thick emulsion, like mayonnaise or hollandaise, where a mountain of garlic cloves, vegetable oil and lemon juice slowly combine to create a thick mixture.

We love to add a few dollops of toum over grilled beef kofta. If you’re making an Afghan Kebab pita wrap, slather the garlic sauce on the flatbread and top with grilled beef skewers, tomatoes, lettuce and pickles.

Store leftover Kebab Garlic Sauce in the fridge for up to 1 month.

It’s easy to make homemade Afghan Kebab by using a coal fire or barbecue. If you don’t have a barbecue you can bake the beef kafta in the oven at 350ºF for around 15 to 20 minutes until they are fully cooked.

Afghan Kebab is defined by its crispy grilled texture and mixture of Middle Eastern spices and herbs such as garlic, parsley, all spice, cayenne, cardamom, sumac, nutmeg and paprika.

We use a food processor to blend the beef kafta ingredients together, but you can also mix them by hand in a large mixing bowl. Just make sure to shred the onions with a grater as you want them to fully incorporate into the meat mixture.

If you’re a lover of lamb, we suggest modifying the recipe by using a combination of 1 lb ground beef and 0.5 lb minced lamb.

Be sure each Afghan Kebab is about 1 inch in thickness, this is best for grilling. Lay the beef kafta on a tray lined with parchment paper until you’re ready to slide them onto a preheated barbecue. Place kebabs on a lightly oiled, heated gas grill. Grill over medium heat for 4-5 minutes on each side.

You can use metal skewers but we prefer disposable wooden skewers when hosting a family barbecue as they make clean up a breeze. Be sure to soak the wooden skewers in water before forming the Afghan Kebabs with your hands.

We love to double this recipe and freeze half of the marinated beef kafta mixture in a zip lock bag. When you’re planning a last minute dinner party or have a busy week at work, an already prepared bag of Afghan Kebab mix offers a quick & easy Middle Eastern meal.

What To Serve With Afghan Kebab

If you’re looking for a quick on the go lunch or dinner, grilled beef kafta is often stuffed in a pita with shredded lettuce, sliced tomatoes, olives, cucumbers, onions, pickled vegetables, garlic sauce, tahini and sometimes even crispy French fries. Afghan Kebab is often enjoyed as an on-the-go meal served like a sandwich or wrap.

Visit a new Middle Eastern restaurant each week and you’ll find each chef serves their signature Afghan Kebab with a unique selection of homemade salads and dips. Rather than eating on the go, a Beef Kafta Plate offers as a well rounded meal meant to be enjoyed with friends and family.

If you’re hosting a large dinner party we suggest serving a Beef Kafta buffet, rather than building an individual plate for each of your guests. We find folks love a DIY culinary challenge and it’s especially fun for families with kids. You might want to include other Middle Eastern dishes such as Lebanese Kibbeh or a Chicken Shawarma Plate.

Set your kitchen counter up with bowls of pickles, olives, creamy dips, fresh salads, garlic sauce and freshly chopped herbs like mint and parsley. Each guest can create their very own Afghan Kebab Plate from the platter you masterfully create! 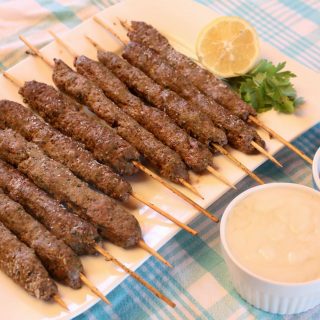