Cairo has been the Islamic world’s greatest city since the Mongols sacked Baghdad in 1258. Egyptians have two names for the city: Masr, meaning both the capital and the land of Egypt, is a timeless name rooted in pharaonic civilization; the city’s other name, Al-Qahira (The Triumphant), is linked specifically to the Fatimid conquest which made it the capital of an Islamic empire embracing both modern day Libya, Tunisia, Palestine and Syria.

In monumental terms the two names are symbolized by two dramatic landmarks: the Pyramids of Giza at the edge of the Western Desert, and the great Mosque of Mohammed Ali – the modernizer of Islamic Egypt – which broods atop the Citadel. Between these two monuments sprawls a vast city, the colour of sand and ashes, of diverse worlds and epochs and gross inequities. All subdued into an organism that somehow thrives in the terminal ward: medieval slums and Art Deco suburbs, garbage-pickers and marbled malls, donkey carts and limos…

Cairo’s population today is estimated at around twenty million and is swollen by a further million commuters from the Delta and a thousand new migrants every day. Cairo truly is one of the world’s great metropolises, and most importantly a gateway for Carmen Sandiego, Indian Jones and Tomb Raider nerds keen to explore the nations ancient hieroglyphic adorned temples.

I explored the city in three days with Egypt’s award winning Memphis Tours, a local operator who expertly planned my itinerary, putting the calm in Cairo’s chaos. I was met at the airport upon arrival by a smiling guide who whisked me through security. I spent the following two days touring through the city with a knowledgable guide, air conditioned car (winning with free WIFI) and a few bottles of water on the ready to quench my thirst.

If you’re embarking on a epic adventure of Egypt’s ancient wonders, start by spending 3 days in the capital!

Things to See and Do in Cairo Egypt 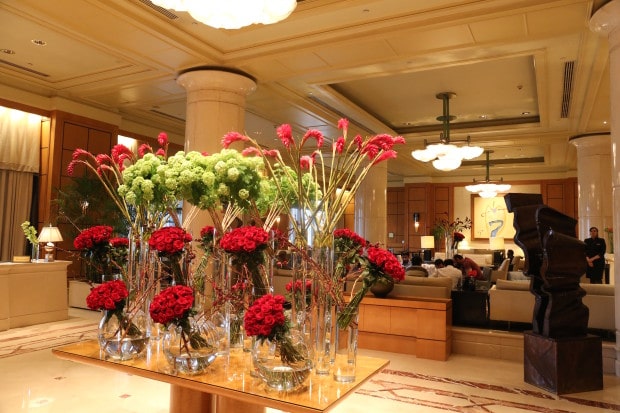 Fragrant flowers greet guests in the spacious lobby at Four Seasons Hotel Cairo at Nile Plaza. Rising above the Nile in the heart of Cairo’s social scene, the Four Seasons is a beacon of honest and passionate Egyptian hospitality where the city’s who’s-who come to rest and relax, primp and play. 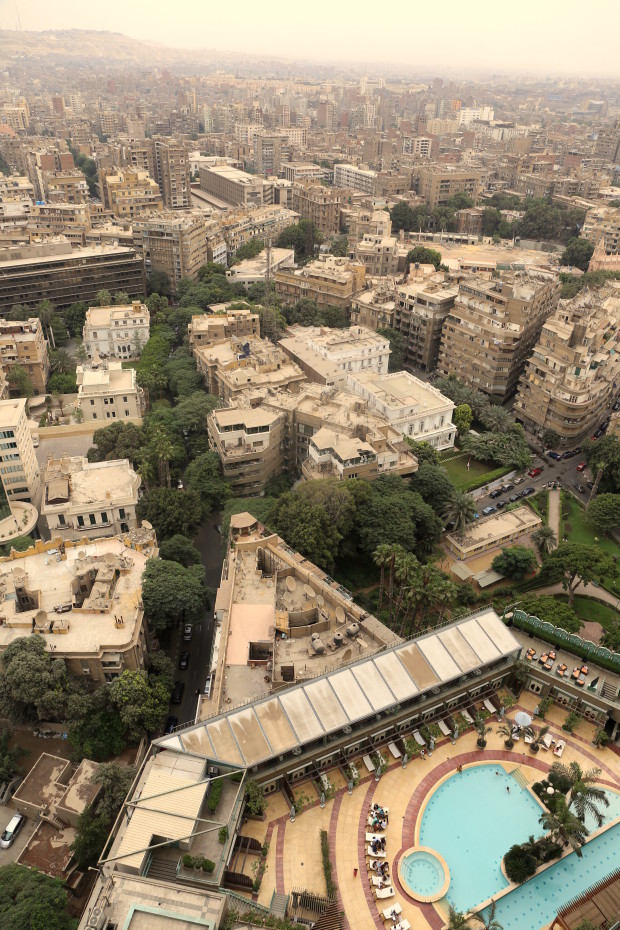 The 30 story Four Seasons Hotel is Cairo’s most luxurious fortress and one of the brands largest properties featuring 365 finely appointed rooms, nine restaurants + lounges and three rooftop pools. Guests who call the Four Seasons their home-away-from-home find themselves surrounded by the pretty Garden City section of old Cairo, amid belle epoque and art deco mansions. 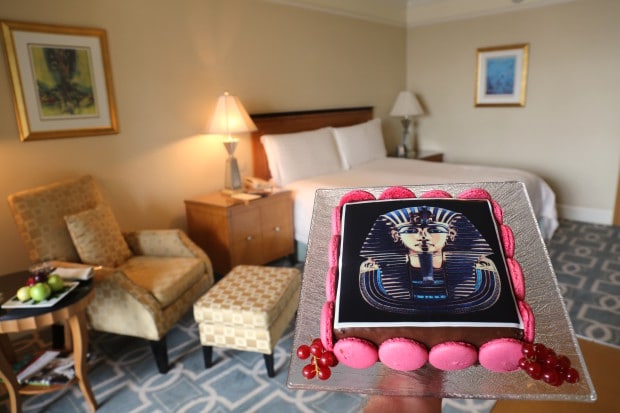 I arrived to my suite greeted by a decadent chocolate mousse cake topped with the golden death mask of King Tutankhamun. The interior of my suite featured natural wood finishes and stylishly comfortable furnishings. I spent my mornings watching the sunrise over the River Nile in posh terry cloth robe and cozy bath slippers on a private outdoor terrace. After a long day spent running around Cairo, the bathroom acts like an urban oasis for exhausted Pharaoh-philes as marble floors lead to relaxing deep-soaking tub with verbena-scented soaps and slathers provided by my favourite L’Occitane from France.

Take an elevator up to the 5th floor and you’ll find a posh pool surrounded by al fresco hookah cafe and wrap around restaurant. Slip indoors to discover the hotel’s world class spa featuring thermal pool, hot tub, eucalyptus-scented sauna, steam room and relaxation room where hot tea and assortment of dried fruit and nuts are served to guests while relaxing on plush leather lounge chairs with a jaw dropping view of the Nile River. I signed up for the signature Nefertari Massage which features warm herb filled pouches that are applied to tense muscles for relaxing relief. 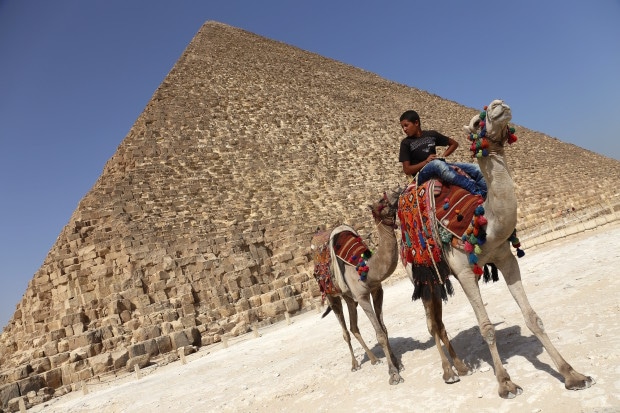 The Pyramids of Giza

Despite centuries of study, the Pyramids of Giza still remain a mystery. There’s their age: we are closer in time to the era of Jesus Christ than he was to the Pyramids. There’s their size: for 4,000 years the Great Pyramid remained the tallest man-made structure ever built. There’s the how: the Pyramid’s are precisely placed, their sides aligning to true north with only 3/60th degree of error, while certain internal air shafts line up perfectly with celestial constellations. And there’s the why: merely tombs for pharaohs or something much more? Of the Seven Wonders of the Ancient World, only the Pyramids of Giza have withstood the ravages of time. The most impressive is the Pyramid of Cheops also known simply as the Great Pyramid. It is the tallest and oldest of the trio, built during the reign of Khufu (2589-2566 BC) and originally stood 140m high and measured 230m long at its base. Enjoy the pyramids by camel, donkey drawn carriage or meander slowly on foot. 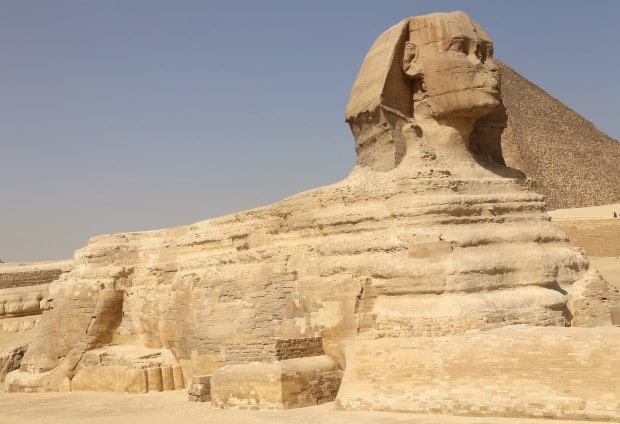 Its age is a point of contention, but the traditional view is that the Sphinx was sculpted around 2500 BC by Khafre and that it is his face – now minus a nose and beard – that fronts the leonine body. The Sphinx is carved from an outcrop of soft sandstone supposedly left standing after the harder surrounding stone was quarried for the Great Pyramid. The name “sphinx” was actually bestowed by the Ancient Greeks, after the legendary creature of Thebes that put riddles to passers-by and slew those who answered wrongly. 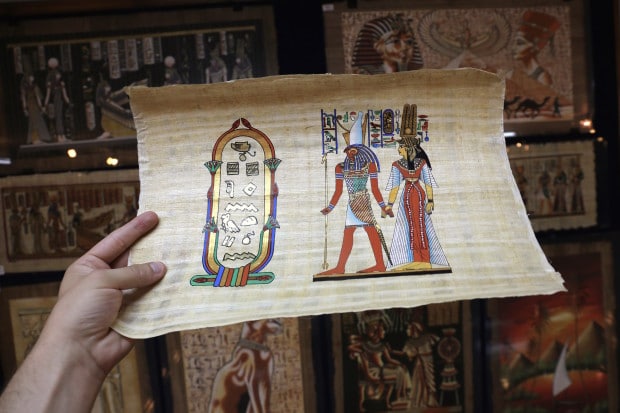 There are several “Papyrus Museums” in Cairo, which are really just art gallery’s that offer visitors a quick educational demonstration on how the world’s “first parchment,” was produced. Ancient Egyptians sliced sweet reeds (similar to sugar cane), flattened each strip to remove moisture and then dried them before weaving each into a matt that could then be written on to tell stories via hieroglyphics. Today you can have your name written in the pictorial language on decorative papyrus…and since you only live once I thought, why not? I was curious to know what the dobbernation blog would have looked like 4000 years ago so I had an artist create this beauty featuring the gods Horus and Isis for all the world to see! 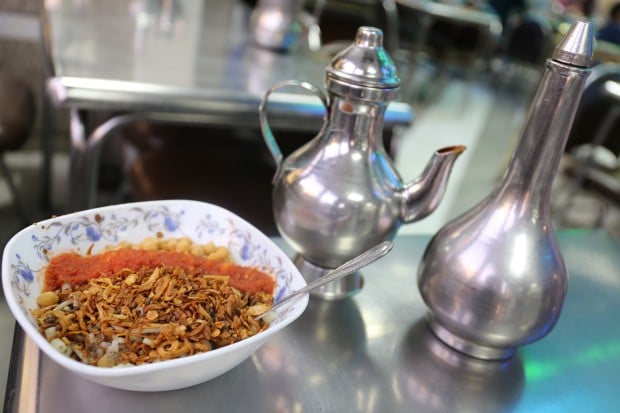 Egypt’s favourite feast is carb fuelled comfort food Koshary which is most often served in restaurants that are entirely dedicated to the dish. Locals in Cairo love Abou Tarek which serves up their rendition in a two story hole-in-the-wall restaurant. I’m going got be honest, when I first read about Koshari I shrivelled up my nose and was seriously skeptical. But after throwing back my first mouthful I was a converted fan. A bowl arrives at the table filled with rice, brown lentils and macaroni topped with fried onions and chickpeas. Hungry diners pour fresh tomato sauce, spicy hot sauce and a garlic infused vinegar onto the dish before muddling and mixing like Korean’s and their beloved bibimbap. 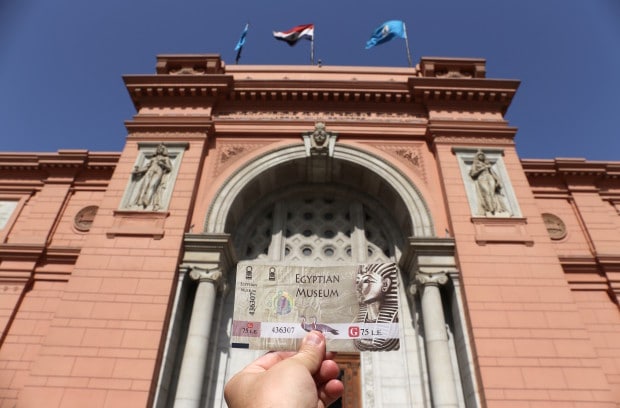 All of ancient Egyptian history can be found at Cairo’s epic Egyptian Museum, truly one of the world’s most awe inspiring archeological collections. From the earliest Pharaonic artifact ever discovered to treasures from the era of Cleopatra, the last in a dynastic sequence of divine kings and queens stretching over three millennia. It is said that the museum displays more than 120,000 items, with at least that many again stored away out of sight in the basement. The real crowd pleasers are the treasures from Tutankhamun’s tomb and the eerie “Royal Mummy Room,” which features the desiccated bodies of some of Egypt’s mightiest rulers. Of eleven royals present, the most famous are Seti I and his son Ramses II, whose colossi adorn a great many monuments in Upper Egypt. 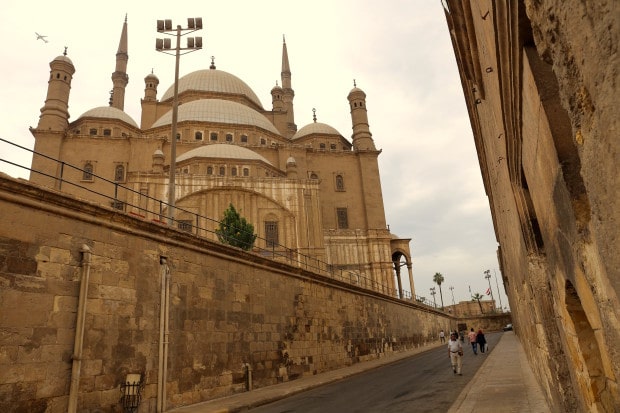 The Citadel and Mohamed Ali Mosque

Overlooking the city from a rocky spur of the Muqattam Hills, the Citadel is a sizeable fortress. Founded in the 12th century, it served as the royal residence and barracks until the late 1800s. Its earliest parts date back to the reign of the ruler Saladin, but over the course of its history it was reorganized and enlarged on numerous occasions. 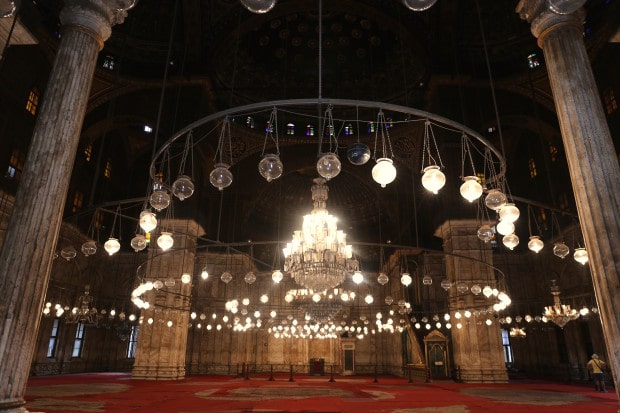 The Turkish-style Mohammed Ali Mosque sits perched on Cairo’s skyline, safely protected within the walls of the Citadel. It exudes a grandiose sensibility with the ornate clock given by the French King Louis Philippe (in exchange for the obelisk in the Place de la Concorde in Paris), and the Turkish Baroque ablutions fountain, resembling a giant Easter egg.

Inside the mosque, whose lofty dome and semi-domes are decorated like a Faberge egg, the use of space is classical Ottoman, reminiscent of the great mosques of Istanbul. A constellation of chandeliers and globe lamps illuminates Thuluth inscriptions, a gold-scalloped mihrab and two minbars, one faced in alabaster, the other strangely Art Nouveau. 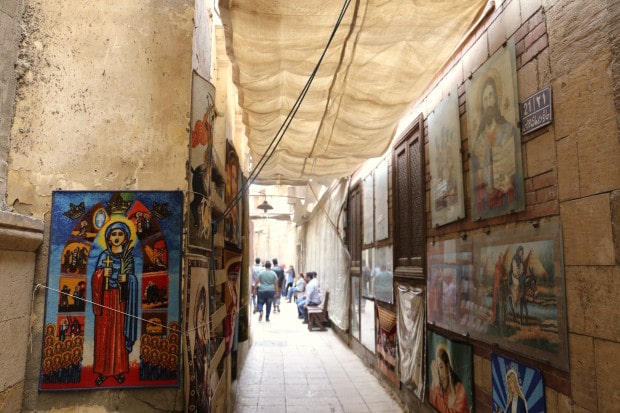 The heart of the district of Cairo’s Coptic Christian community centres on the Roman fortress of Babylon. The ancient gate towers of the former fortress provide access to a sunken compound, evidence that the street level has risen over the centuries. Legend has it that Mary, Joseph and young Jesus spent four years living in this neighbourhood after fleeing from Palestine. Today the street’s are filled with Bible inspired trinkets which spill onto streets flanked by a cluster of ancient Christian churches. 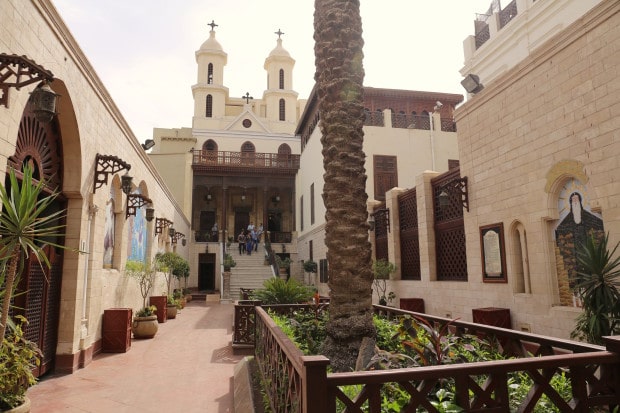 The Hanging Church in Coptic Cairo is named for its location above a gatehouse of a Roman Babylon Fortress. Its nineteenth-century facade with twin bell towers is seen beyond a narrow courtyard decorated with colourful mosaics depicting enchanting biblical scenes. 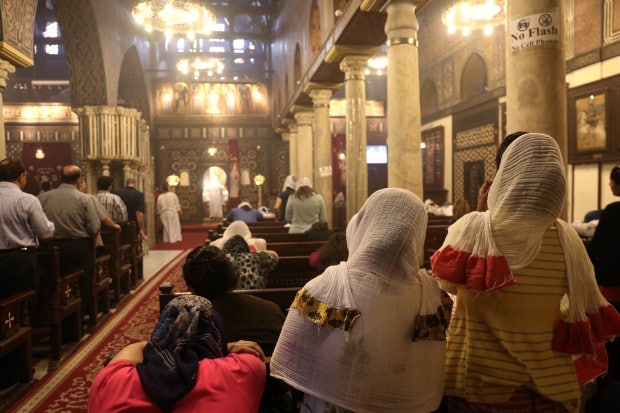 I visited on a Sunday morning and joined a lively congregation as they sang Coptic hymns in a hazy room filled with the waft of sweet incense. Among the churches relics: an olive stone chewed by the Virgin Mary. 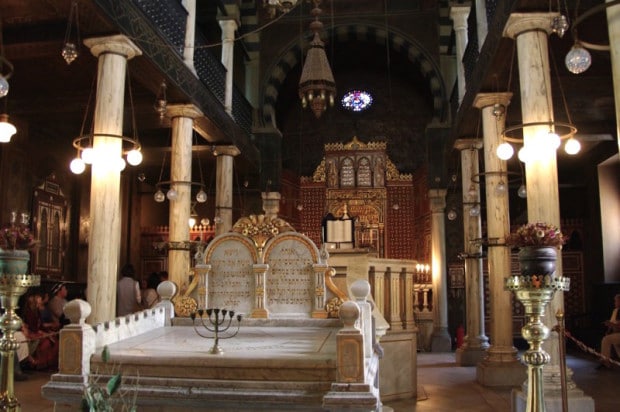 The Ben Ezra Synagogue is a unique relic of Cairo’s ancient Jewish community which persisted long after most Jews had moved, leaving only twelve impoverished families by 1864, and not one a century later. The synagogue would have crumbled away were it not for the efforts of one “Rabbi” Cohen, who shamelessly overcharged for souvenir postcards to fund repairs for twenty years, until the American Jewish Congress and the Egyptian governments stepped in to restore it in the 1990s.

Khan al Khalili is Cairo’s chaotic and vibrant bazaar area, parts of which date back to the 16th century. Its covered passageways, stone gates and labyrinthine alleys still have a wholly medieval feel. Local vendors trade spices, brightly coloured cloth, perfume, gold, silver and plenty of tourist trinkets featuring smiling pharaohs and Turkish lanterns. This is the sort of magical place I like to stroll on the solo.

El Fishawy is a popular cafe located in the Khan al Khalili market. Once you’ve shopped yourself silly grab a seat on the restaurant’s al fresco patio and join the locals as they gobble up fresh falafel, sip on mint lemonade + hibiscus juice and smoke from bubbling hookah. 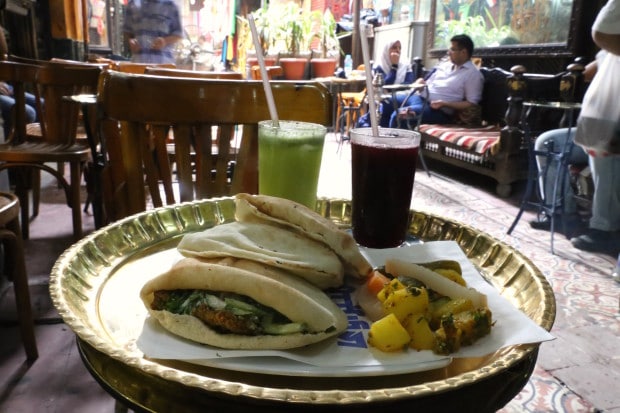