Melitzanosalata, also known as Greek Eggplant Dip, is a healthy, and hearty recipe perfect for vegans and vegetarians. Baked aubergine is mixed with garlic, olive oil, lemon juice, tahini and herbs than slathered on fresh bread, or served as part of a Greek meze feast!

Melitzanosalata – pronounced meh-leed-zah-no-sah-lah-tah – is a delicious, traditional Greek eggplant dip. Aubergine recipes can be found throughout the Mediterranean and trace back to ancient times. Outside of Greece, you’ll find Middle Eastern eggplant recipes are popular in places like Turkey, Jordan, Egypt, Israel, Morocco and Spain.

The world’s most famous eggplant dip is Baba Ghanoush, which food historians believe originated in Syria. While Baba Ghanoush may have a more recognizable name, study various recipes from the Levant and you’ll find they’re almost identical to Greek Melitzanosalata.

How To Bake An Aubergine

Roasting or baking an aubergine is very easy. We’ve detailed the process in our recipe below but it’s best to familiarize yourself with the steps before getting set up in the kitchen.

You can start to prepare the Melitzanosalata as soon as your strained roasted aubergine has cooled. You’ll need a medium sized bowl, measuring cup and knife to prepare our Greek Eggplant Dip so be sure you’ve got all the necessary tools ready in your kitchen.

Follow the recipe below step by step and in just a few minutes you’ll have a gorgeous Melitzanosalata to show off to your guests!

You Also May Enjoy Reading…

What To Serve with Greek Eggplant Dip

Melitzanosalata is a fantastic recipe for vegetarians and vegans as roasted aubergine offers a hearty and meatless main. Greek Eggplant Dip is most commonly served as one of several meze (small plates) during a family feast. Here are some great serving suggestions for Melitzanosalata lovers.

Get Creative with Melitzanosalata 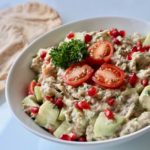