It was a hot summer’s eve when I stepped into Toronto’s posh Royal Conservatory for a top secret soiree hosted by Air Canada. Upon arrival I grabbed a glass of cool Niagara Riesling before plopping myself onto a couch decorated with maple adorned pillows. Canada’s top food and travel media gathered excitedly in anticipation for the big reveal, an announcement which would unveil the airlines new celebrity Chef driven International Business Class menu. 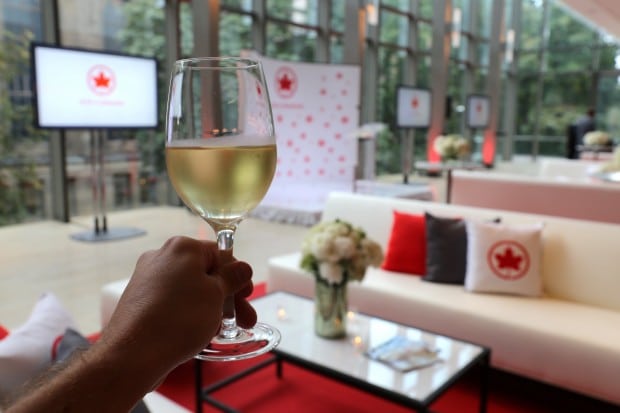 It was on September 3rd at 6:30pm when Canada’s national airline announced its new partnership with celebrated Chef David Hawksworth. David is the award-winning chef behind self titled Hawkworth Restaurant in Vancouver. He has spent a decade honing his talents in Europe working in Michelin-starred kitchens such as Le Manoir au Quat’ Saisons, L’Escargot and The Square. He’s also had the opportunity to travel extensively as a guest chef, most recently to the James Beard House in New York City, also to Sevva, in Hong Kong, Splendido in Toronto and Cakebread Cellars in Nappa Valley. He’s one of Canada’s celebrity culinary champions, appearing as a guest judge on Food Network Canada’s Top Chef and has participated in numerous TV cooking segments. Chef Hawksworth is also the youngest chef inductee into the BC Restaurant Hall of Fame, a cherry on the sundae! 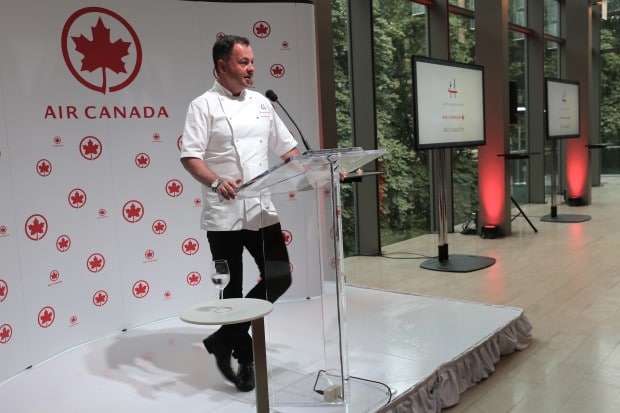 Chef Hawksworth will be creating a selection of seasonal dining options including appetizers, salads, main courses and desserts, which will refresh quarterly. My Top 6 Tastes from Air Canada’s new International Business Class Menu: 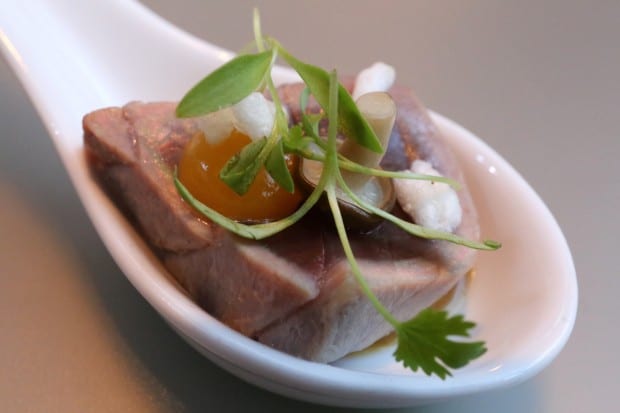 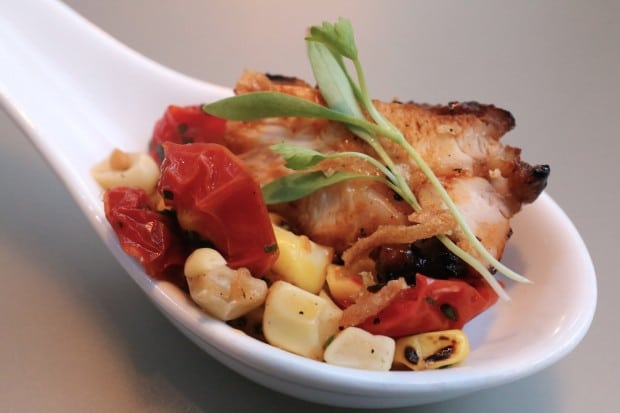 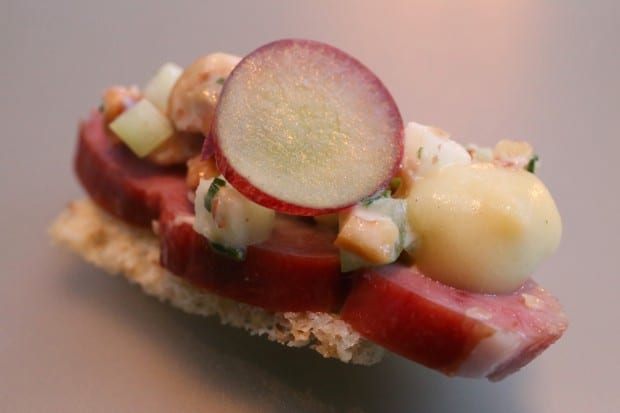 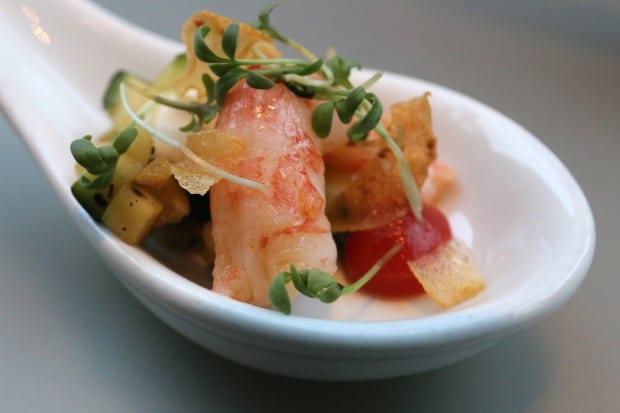 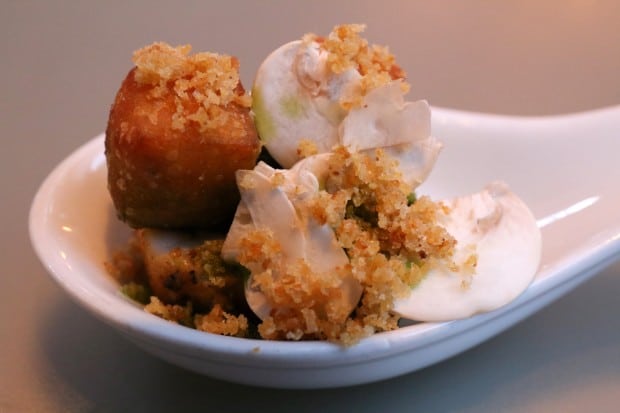 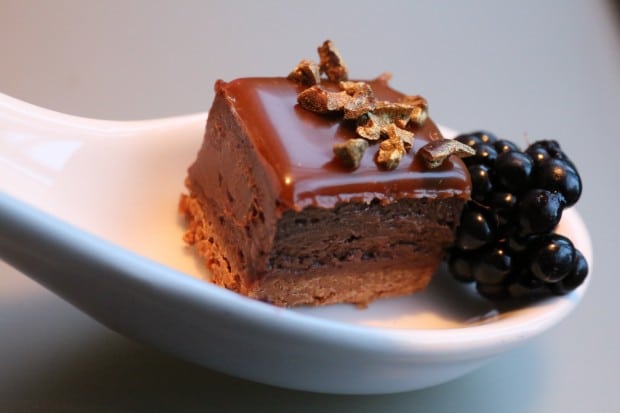 A few weeks later Chef Hawksworth was back in town with Team Air Canada to promote his new International Business Class menu at the first inaugural Toronto Food & Wine Festival hosted at Evergreen Brick Works. Food & Wine Magazine brought international culinary heavyweights to its first festival in Toronto, putting the expertise and creativity of the best culinary talents from across the continent in the spotlight. Over the course of three delectable days, guests experienced the best in food and wine, beer, spirits and other beverages; from sipping and savouring 130 vendors in the Grand Tasting Pavilion, to taking in live demonstrations by celebrity chefs, to cooking alongside top chefs. 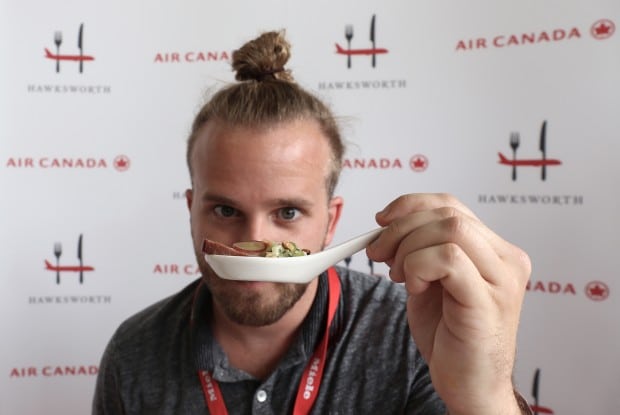 Upon arrival I checked in at the media lounge and was greeted by a flashy Air Canada booth which offered VIPs a selection of wee spoon’s featuring one of Chef Hawskworth’s new International Business Class dishes. The quick bite would be a tasty teaser to the intimate, 1-on-1 cooking demo select media would enjoy later in the afternoon. 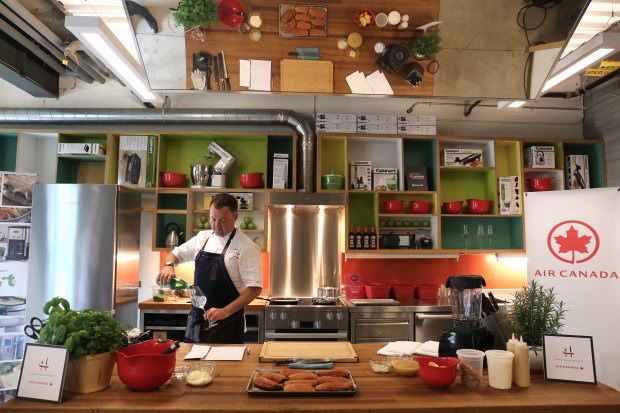 I arrived early to get a front row seat at Chef Hawksworth’s cooking demo and spent the next hour sipping wine while working with my fellow classmates to help prepare a parade of pretty plates featuring one of Air Canada’s new International Business Class  dishes: Smoked Ontario Duck Breast with Waldorf Salad and Mustard Apple Puree. 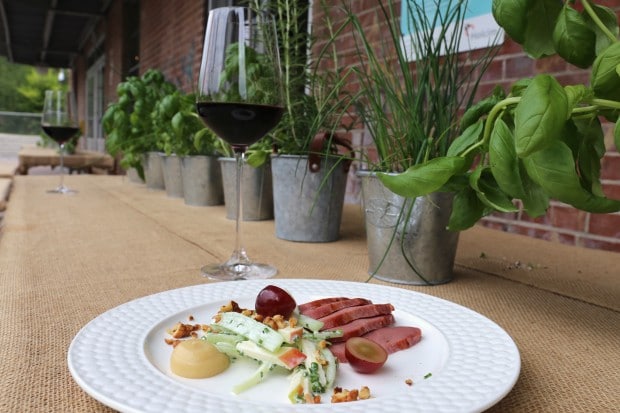 Chef Hawksworth chatted with the class about creating a new culinary experience for Air Canada, his own interpretation of Fine Dining in the Sky, which focuses on using fresh ingredients. When asked about what culinary trends are taking place today at 35,000 feet he chirped, “as far as trends go, we have tuna tataki on there, some of the raw items on our menu are quite nice. I also like umami, soy and showcasing fresh acidity in things. The bar seems to be getting higher and higher, luxury travellers have a discerning palate and we’re focussing on offering good food that they’ll respond to with a smile.”