Our Air Fryer Potato Skins recipe is one of our favourite quick & easy homemade snacks to bake when a craving for carbs, cheese and bacon hits!

What Are Potato Skins?

Potato skins, also referred to as potato jackets, are a snack food or appetizer made of unpeeled potato halves, hollowed and dressed with bacon, cheddar cheese and green onions before being baked again.

The twice baked potato snacks are commonly found on the menus of pubs and casual family restaurants in the United States and Canada.

As an appetizer in restaurants, potato skins have been around since the 1970s. They’ve been documented by local culinary historians on menus as early as 1974. Many restaurants such as TGI Fridays have claimed to be one of the first restaurants to serve potato skins.

While popularly enjoyed at local restaurants and and sports bars, these addictive cheesy snacks are also commonly made at home using common pantry ingredients.

My family is obsessed with potato skins.

My sister ordered the popular appetizer all the time when she was little. Her love for the classic pub grub was no surprise as she has always been the resident mashed potato lover.

We’d often share a platter of crisp potato skins at the table as an appetizer while my dad enjoyed a few glugs of craft beer.

Classic Potato Skins in the 90s were often topped with mozzarella or cheddar cheese, crumbled smoky bacon, scallions or chives and spices.

Some fine dining restaurants took the dish to the next level by adding or substituting gourmet ingredients like gruyere cheese, blue cheese, fried chorizo and shaved black truffle.

Now that we’ve upgraded our kitchen with the trendiest new gadget we love making cheesy Potato Skins in an air fryer.

Cooking Potato Skins in an Air Fryer is a modern day marvel for home cooks who have a penchant for snacking on pub food at home. Air Fryers cook food much quicker and help ensure cheesy potato skins are both crispy and delicious!

Our homemade recipe is so easy to make you’ll have it ready to serve in under 1 hour!

There are two methods to making potato skins in an air fryer, which depend on the style of air fryer you are using.

What To Serve With Air Fryer Potato Skins

Potato Skins cooked in an Air Fryer can be enjoyed as a snack on their own or as a hearty lunch with a healthy side salad. 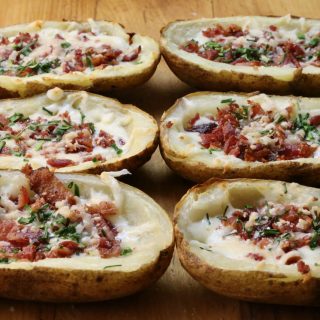