Enjoy as a cool scoop on a hot summer day or serve as a special dessert like an ice cream banana split sundae.

Since everyone in my family loves chocolate and nuts, I thought why not mimic Ben & Jerry’s Chunky Monkey by creating my own unique homemade recipe?

Made the most DELISH ice cream yesterday with mom’s @cuisinartcanada. Roasted banana muddled with chocolate chips, caramel sauce and salted peanuts. I don’t think I’m ever going to buy a tub again thanks to fresh @dairyfarmersofcanada @ontariodairy! 🍌🥜🍫🍦

How To Roast Bananas

By slowly roasting bananas in the oven you dehydrate the fruit and allow the natural sugars to caramelize. This transforms the banana flavour so it is uniquely sweet and more pronounced.

Roasting bananas is easy, you simply need to peel them and place them on a cookie sheet lined with parchment paper.

You’ll know the roasted bananas are finished baking once they turn dark brown, deflate from moisture loss and have the consistency of fruit leather.

We add the roasted banana to the ice cream custard base by whisking it in and then passing the mixture through a fine sieve.

Ribbons of frozen caramel offer a perfectly chewy addition to the best Banana Nut Ice Cream. Its sweetness pairs nicely with the saltiness of roasted peanuts.

You can use store-bought caramel from Smuckers or a gourmet Irish variety often sold in jars. If you love making desserts from scratch try making this homemade Salted Caramel recipe.

If your caramel sauce is really thick, warm it up so it’s consistency is thin and can be poured over the banana ice cream base easily.

What Chocolate To Use In Banana Nut Ice Cream

We’re so obsessed with quality chocolate that we took several trips to Switzerland to research the best Swiss Chocolate Shops.

We’ve used high quality dark chocolate chunks in this recipe but you could also use smaller chips flavoured with white chocolate, milk chocolate or butterscotch.

If you’re feeling truly decadent why not buy a few bars of your favourite Swiss Lindt Chocolate? Add the chopped chocolate bars to your homemade Banana Nut Ice Cream for an unforgettable mouth-watering dessert.

We’ve used salted roasted peanuts in our recipe but you could substitute for toated walnuts, pecans, hazelnuts or almonds.

If you’re feeling extra decadent why not warm up 1/2 cup of your favourite peanut butter and fold it into the ice cream before storing it in the freezer to solidify?

If it’s your first time making homemade Banana Nut Ice Cream we suggest reading our step by step recipe from top to bottom. Familiarize yourself with each step before you start cooking in the kitchen.

What To Serve With Banana Nut Ice Cream

If you’re an ice cream traditionalist you’ll likely want to lick our Chocolate Chip Caramel Banana Nut Ice Cream off a cone or scoop out of a bowl.

If you’re celebrating a special occasion, or simply live your life with the mantra YOLO, dress up your homemade ice cream by serving it as a banana split sundae or between two homemade cookies as a gourmet ice cream sandwich. We love serving this ice cream recipe smushed between Oat Flour Cookies, Dark Chocolate Lindt Lindor Cookies and Oatmeal Chocolate Toffee Walnut Cookies.

Once you’ve mixed the soft roasted banana ice cream base with peanuts, chocolate chips and caramel sauce, store it in the freezer overnight to harden so you can scoop it easily.

Our homemade Roasted Banana Chocolate Chip Peanut Caramel Ice Cream can be stored in the freezer for up to a month. But, I really doubt it will last much longer than a few days! 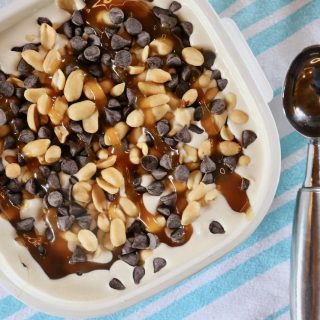