Our Air Fryer Frozen Waffles recipe is one of our favourite quick & easy homemade brunch or breakfast dishes.

Meat eaters can serve a stack of waffles with a side of breakfast sausage, crispy bacon and fried eggs for a hearty brunch idea.

A waffle is a dish made from leavened batter or dough that is cooked between two plates that are patterned to give a characteristic size, shape, and surface impression.

There are many variations based on the type of waffle iron and recipe used. Waffles are enjoyed throughout the world, particularly in Belgium, which has over a dozen regional varieties. Waffles may be made fresh or simply heated after having been commercially cooked and frozen.

The word waffle first appears in the English language in 1725. It is directly derived from the Dutch wafel, which itself derives from the Middle Dutch wafele.

By the early 20th century, waffles were shifting from a predominantly street food to an increasingly homemade product, aided by the 1918 introduction of GE’s first electric commercial waffle maker.

By the mid-1930s, dry pancake/waffle mix had been marketed by a number of companies, including Aunt Jemima and Bisquick.

It is the three Dorsa brothers from California who would go on to innovate commercial production of frozen waffles, which they began selling under the name Eggo in 1953. During that time manufacturers started testing the production of waffles with potato starch, which increase the stability of the waffle and protect them from sticking to the iron.

Most recently, cooking Frozen Waffles in an Air Fryer has become the recipe rage for curious cooks looking to enjoy a quick brunch dish with their new trendy kitchen gadget.

Take a stroll down your grocery stores freezer aisle and you’ll find many brands offering unique frozen waffle products to cook at home in your air fryer.

My family is obsessed with waffles.

My father is well known for his obsession with weekend breakfast and brunch.

We often enjoyed frozen Eggo waffles at the cottage in Muskoka in the summer, topped with locally grown blueberries and strawberries.

My mom loved serving waffles as a decadent dessert, topped with scoops of ice cream, Nutella, candied nuts and chocolate or caramel sauce.

Now that we’ve upgraded our kitchen with the trendiest new gadget we love making Frozen Waffels in an Air Fryer.

Cooking Frozen Eggo Waffles in an Air Fryer is a modern day marvel for home cooks who have a penchant for serving decadent breakfasts. Air Fryers cook food much quicker and help ensure frozen waffles are crispy, moist and delicious!

How To Make Frozen Waffles In Air Fryer

Our air fryer frozen waffles recipe is so easy to make you’ll have it ready to serve in under 10 minutes!

There are two methods to making frozen Eggo waffles an air fryer, which depend on the style of device you are using.

After making frozen waffles in an air fryer garnish the plate with your favourite toppings. Classic and simple toppings include cold butter and maple syrup.

Brunch and breakfast waffles can be topped with peanut butter and jam, fresh fruit and whipped cream.

Enjoy frozen Eggo waffles as a dessert by serving them with scoops of ice cream, chocolate sauce drizzle, Nutella or dulce de leche.

What To Serve With Frozen Waffles In Air Fryer

If you’re serving frozen waffles at breakfast use some of our healthy topping suggestions like fresh fruit, maple syrup, peanut butter or jam and jelly.

You can transform simple butter and maple syrup topped breakfast waffles into a hearty first meal of the day by serving them with bacon, sausage, scrambled eggs and hash browns. 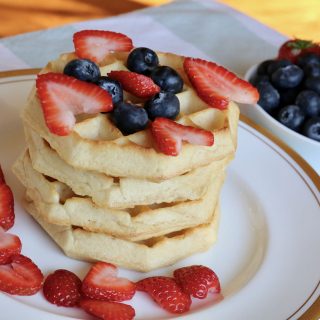