Looking to learn how to make the best Lebanese Kibbeh recipe?

If you’re a meat lover who has never tasted Lebanese Kibbeh before you might be wondering, “what makes it so great?”

Fried Kibbeh packs a meaty punch as its interior is filled with fried minced beef and the exterior casing is prepared with a homemade paste made up of minced beef and bulgur wheat. That’s two textures of spiced minced beef in your mouth in one glorious bite!

Learn more about how to make authentic Lebanese kibbeh in the step-by-step tutorial below!

What Is Lebanese Kibbeh?

Lebanese Kibbeh, also known as kibbe, kebbah, kubbeh, kubbah or kubbi depending on the region, is a Levantine dish made of bulgur wheat, minced onions, finely ground meat and Middle Eastern spices.

Kibbeh is considered to be the national dish in many Middle Eastern countries, including Lebanon and Syria. Versions are also found in Egypt, Israel, Iran, Iraq, Armenia, Turkey, Palestine, Jordan and Cyprus.

Kibbeh is usually prepared by pounding bulgur wheat with meat until it forms a fine paste. It is then formed into balls the shape of a football and stuffed with cooked minced meat, nuts and spices. The Middle Eastern spiced meat dumplings are then deep fried until golden brown and crispy.

What Is Bulgur Wheat?

Bulgur Wheat, also known as burghul, is a cereal made from the cracked groats of several different wheat species, most commonly durum wheat.

Bulgur is often mistaken for cracked wheat, which is a crushed wheat grain that, unlike bulgur wheat, has not been parboiled. Bulgur is common in Middle Eastern cuisine and has a light and nutty flavour.

Bulgur is available in a range of grinds, including fine, medium, coarse and extra course. The highest quality bulgur wheat features particles that are uniform in size.

Bulgur does not require cooking. Simply soak the grain in water and it absorbs and puffs up, often double in size.

Travel to the Middle East by Cooking Lebanese Kibbeh at Home

For over ten years, I’ve been on the hunt for the best Lebanese Kibbeh via adventures that had me zig-zagging through Morocco, Turkey, Egypt, Jordan, Israel and Dubai. You guessed it! Some of my fondest food memories while traveling in the Middle East feature Lebanese Kibbeh drizzled with tahini and spritzed with lemon.

I ate Lebanese Kibbeh with flat bread at a traditional Moroccan riad, as a side dish with Turkish kebab in Istanbul and Bodrum, accompanied by kofta on a Nile Cruise and in bustling market in Cairo, late night fried kibbeh feast in Amman, mid-afternoon grilled meat snack at bustling markets in Tel Aviv and Jerusalem and a massive Middle Eastern meat platter in the middle of the Dubai desert while belly dancers twirled under the night sky.

Where To Eat Authentic Lebanese Kibbeh

If you live in a large city in Canada or America you’ll likely have access to a local Middle Eastern restaurant that serves an traditional Lebanese Kibbeh.

Haven’t traveled to the Middle East before? It may be helpful to first sample Lebanese Kibbeh at a local restaurant to better understand how the appetizer is served. You’ll get an idea for the desired overall size, crunchiness of the exterior and spice level. You’ll also find inspiration on what to pair with kibbeh such as such as tahini, fresh salads and flatbread.

When my family moved to Oakville the first restaurant we visited was a local Egyptian and Lebanese restaurant called Agabi. Ranked as one of the best restaurants in Oakville, Agabi, became our family’s go-to Mediterranean take out joint.

We’ve been eating at Agabi for years and have tasted almost every dish on the menu. Each member of my family has discovered a favourite dish, that we always seem to consistently order.

My father loves the Creamy Chicken, muddled with mushrooms and onions. My mother is a fan of the Lamb Shashlik, grilled to perfection with green pepper and mushroom. My sister always orders the Chicken Pineapple, marinated boneless chicken served with crispy bacon and juicy pineapple. I’ve always had a heart for Agabi’s Lebanese Kibbeh, best served alongside a Greek Salad, aromatic rice and a pungent puddle of Toum Garlic Sauce.

After discovering the perfect homemade Lebanese Kibbeh recipe at Agabi, my family would always seek out the next best thing. We’ve traveled to Israel, Jordan, Egypt and beyond…always keen to experience a new and fresh take on the authentic Middle Eastern deep fried appetizer.

Our recipe for Lebanese Kibbeh uses 100% lean ground beef because my father isn’t a big fan of lamb. You could easily split the amount of minced meat in this recipe with half lamb and half beef.

When purchasing ground meat for fried kibbeh be sure to purchase lean minced meat. Since the meat balls are deep fried you want to avoid significant shrinkage. We do not suggest using your deep fry vegetable oil again as it will include rendered beef fat, which can go rancid.

If it’s your first time cooking Lebanese Kibbeh at home be sure to review our detailed step-by-step recipe below. Here are some helpful tips and tricks to get you started:

Homemade vegetarian toum is easy to make in a blender at home. The sauce is essentially a thick emulsion, like mayonnaise or hollandaise, where a mountain of garlic cloves, vegetable oil and lemon juice slowly combine to create a thick mixture.

When serving a Lebanese Kibbeh platter, we love to add a few dollops of toum over the crispy fried croquettes. Store leftover Toum Garlic Sauce in the fridge for up to 1 month.

What To Serve With Kibbeh?

If you’re looking for a quick on the go lunch or dinner, Lebanese Kibbeh is a great option accompanied by pita, olives, pickled vegetables, garlic sauce, tahini and French fries.

Visit a new Middle Eastern restaurant each week and you’ll find every chef serves their signature Lebanese Kibbeh with a unique selection of homemade salads, soups and dips.

If you’re hosting a large dinner party we suggest serving a Fried Kibbeh buffet-style. We find folks love a DIY culinary challenge and it’s especially fun for families with kids. You might want to include other Middle Eastern dishes such as Chicken Shawarma or Afghan Kafta Kebab.

Set your kitchen counter up with bowls of pickles, olives, creamy dips, fresh salads and freshly chopped herbs like mint and parsley. Each guest can create their very own healthy Middle Eastern plate topped with fried kibbeh.

If you have leftover kibbeh store in an airtight container in your fridge for up to 4 days. Reheat our Lebanese Kibbeh recipe in the oven (not microwave) to ensure the exterior gets crispy. 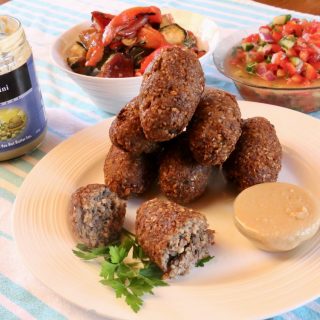