Can you cook frozen Cavendish Hash Browns in an air fryer? Absolutely, it’s so easy!

Crispy Air Fryer Hash Browns are one of our favourite quick & easy side dishes to serve at breakfast or brunch. Follow our simple recipe for air fried hash browns and you’ll enjoy perfectly browned and crispy breakfast shredded tater patties every morning you have a craving!

Our simple brunch recipe takes only a few minutes to cook because it uses frozen store bought hash brown patties by Cavendish Farms.

You can serve Air Fryer Hash Browns as a vegetarian or vegan snack with ketchup or your favourite healthy dips. Or if you’re catering to carnivores frozen hash brown patties cooked in an air fryer make for the perfect side dish on a breakfast plate alongside eggs, baked beans, bacon, sausage and fresh fruit.

What Are Hash Browns?

Hash browns, also known as hashed browns, are a popular American and British breakfast food, consisting of finely chopped potatoes that have been fried until browned.

The word “hash” is derived from the French word hacher which means to hack or chop. This means hashed browned potatoes literally translate to “chopped and fried potatoes”.

Originally, the full name of the dish was “hashed brown potatoes,” of which the first known mention is by American food author Maria Parloa in her 1887 Kitchen Companion. She described the dish of “hashed and browned potatoes” as a fried mixture of cold boiled potatoes which is folded “like an omelet” before serving.

Modern Hash Browns first started appearing on breakfast menus in New York City in the 1890s. They’re now a staple breakfast food at diners in North America, where they are often fried on a large griddle cooktop or grill. They’re often compared to the popular Swiss dish called Rosti.

While hash browns can be enjoyed freshly made at a breakfast restaurant, they are also a popular mass-produced food product sold at grocery stores in the freezer aisle.

Homemade hash browns are traditionally shredded potatoes that are pan fried until golden brown and crispy.

American home fries are pan-fried potatoes cut into small cubes or slices, fried in butter and often sauteed with onions, peppers, and a medley of savoury seasonings like chili powder and herbs.

French fries are made by peeling the raw potatoes and cutting them into long, thin strips then deep frying.

Cavendish Farms makes our favourite frozen hash brown patties, which are sold in the freezer aisle of your grocery store and can be cooked in an oven, convection oven, toaster oven or air fryer.

We love to cook Air Fryer Hash Browns because it requires less oil then deep frying so is a healthier option. Air fried hash browns also take less time to cook so you can have a hearty breakfast on the table in just minutes!

My family loves feasting on a decadent weekend brunch.

We have a tradition of making special breakfast recipes on holidays like Mother’s Day, Father’s Day and Christmas that often include homemade muffins and pancakes.

Some of my fondest brunch memories took place at our family cottage in Muskoka when I was growing up. In the summer months we’d forage for berries and indulge in a proper Canadian breakfast spread.

In the US and Canada family’s love to indulge in weekend brunch. The most common breakfast items on the plate are eggs (fried, scrambled or poached), crispy bacon, sausage, toast, fresh fruit, and crispy potatoes (either home fries or hash browns).

Now that I’ve upgraded my kitchen with the trendiest new gadget I love making hash browns in an air fryer at home.

Cooking Frozen Hash Browns in an Air Fryer is a modern day marvel for home cooks who have a penchant for making quick & easy recipes. Air Fryers cook food much quicker than an oven and help ensure hash brown patties are cooked to to perfection, crispy on the outside and moist and tender on the inside.

How To Make Frozen Hash Browns In Air Fryer

Our air fryer home fries recipe is so easy to make you’ll have it ready to serve in just minutes!

There are two methods to making frozen hash browns in an air fryer, which depend on the style of device you are using.

What To Serve With Air Fryer Hash Browns

Hash Browns cooked in an air fryer are a quick & easy snack or breakfast side dish to cook last minute in the morning.

The most popular way to serve hash browns is as a starchy side dish on a decadent breakfast plate. We like to serve them with eggs (poached, scrambled or fried), baked beans, crispy bacon, maple sausage and fresh seasonal fruit.

You May Also Enjoy These Air Fryer Recipes…

How To Make Frozen Cavendish Hash Browns In Air Fryer 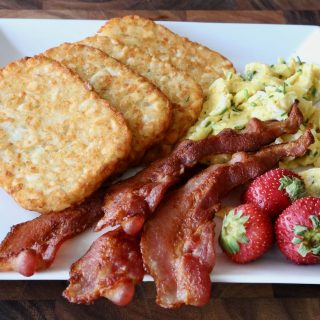