Learn how to make the best Gluten Free Porridge recipe.

This healthy gluten free porridge recipe is a simple breakfast or brunch to prepare for your family. Kids love choosing their own toppings such as fresh fruit, dried fruit, roasted nuts and berries.

What Is Gluten Free Porridge?

A gluten-free diet is a nutritional plan that strictly excludes gluten, which is a mixture of proteins found in wheat, as well as barley and rye. It’s what makes dough elastic and gives bread a chewy texture.

Eating a strict gluten free diet is important to those who have Celiac disease. The serious autoimmune disorder is triggered after consuming gluten so finding alternatives to barley, rye and wheat is important when cooking and baking at home.

Gluten free diets have become popular in recent years with foodies who are not diagnosed with Celiac disease. They chose to exclude gluten in their diet for nutritional reasons rather than serious health side effects.

The most common porridge in Europe and North America is made of rolled oats or oatmeal. Many processing facilities can not guarantee oats or oatmeal are gluten free since they also process wheat, rye and barley onsite. Those with Celiac disease often avoid oatmeal or oat porridge because of the risk of cross contamination.

If you know your local oat farmer or can buy from a small local producer who guarantees the oatmeal and oats they sell are not cross contaminated, oatmeal is safe and naturally gluten free.

Porridge is a popular meal around the world. It’s essentially grains that are cooked in liquid and served as a thick mixture and can be prepared both sweet and savoury. Porridge grains can be cooked in water, milk, stock or broth.

Oatmeal is popular in Scotland, polenta is a favourite for Italians, congee is a common breakfast in Hong Kong and Malaysia and grits are adored in Savannah and New Orleans.

We explore many different kinds of Gluten Free Porridge below.

There are many different kinds of gluten free porridge you can cook at home.

Our favourite gluten free porridge is prepared with buckwheat.

Buckwheat has been cultivated for more than 8,000 years and is often called an ancient grain. It was a common crop worldwide until nitrogen fertilizer was introduced in the 20th century, which increased the production of corn and wheat. As a result, these crops were planted in fields formerly used for buckwheat, and the production of buckwheat fell dramatically.

Buckwheat belongs to a group of foods commonly called pseudocereals, which are seeds that are consumed as cereal grains but don’t grow on grasses. Other common pseudocereals include quinoa and amaranth.

Despite its name, buckwheat is not related to wheat and is therefore gluten-free.

Buckwheat has become popular as a health food due to its high mineral and antioxidant content. Its benefits may include improved blood sugar control. The grain frequently appears in raw food diets and recipes like soba noodles, kasha or roasted groats.

My sister and I had a favourite breakfast growing up as kids and it was whenever my mom and dad would prepare steaming bowls of porridge.

My family comes from the United Kingdom so we grew up on a hearty morning diet of oatmeal and cream of wheat.

My father was the designated porridge maker and always served hot bowls at breakfast with a drizzle of milk, maple syrup, chopped apples and raisins.

As a professional food and travel journalist I’ve had the opportunity to sample porridge from all over the world. From polenta in Tuscany to congee in Taipei.

I’ve been experimenting with new kinds of gluten free porridge and fell in love with this buckwheat recipe.

The recipe is really versatile so you can mix and match toppings based on the season of the year. Pears and apples with cinnamon spice in the Fall and Winter, peaches, berries and cherries in the Spring and Summer.

Buckwheat is a highly nutritious whole grain that many people consider to be a superfood. Among its health benefits, buckwheat may improve heart health, promote weight loss, and help manage diabetes. Buckwheat is a good source of protein, fiber, and energy.

Cardamom contains phytochemicals that have anti-inflammatory and antibacterial properties.

Raisins contain healthy vitamins and minerals. They are also fat-free and cholesterol-free, high in antioxidants, and an excellent source of fibre.

Containing more protein, fibre, vitamin E and calcium that other nuts, almonds may reduce the risk of heart disease, keep your bones healthy,  and help your body absorb essential nutrients.

Coconut is rich in fibre and may also offer a number of benefits including improved heart healthy and digestion. It is high in calories and sautéed fat so be sure to eat in moderation.

Blueberries are a the “king of antioxidant foods, and feature fibre, potassium, folate, vitamin C and vitamin B6.

Cherries are rich in antioxidants, fibre, vitamins and minerals like vitamin C and potassium.

How To Cook Buckwheat For Gluten Free Porridge

Rinse buckwheat groats, drain them in a strainer, then cook them in a 1:2 ratio of water.

Bring the water to a boil, add the buckwheat and some salt, let it come to a boil again and then cover the pot, reduce the heat to a simmer, and cook it for about 15 minutes or until tender.

Our Buckwheat Porridge recipe features our favourite combination of toppings. We offer some additional suggestions below so have fun getting creative with your favourite nuts, seeds, fruits, syrups and spices! 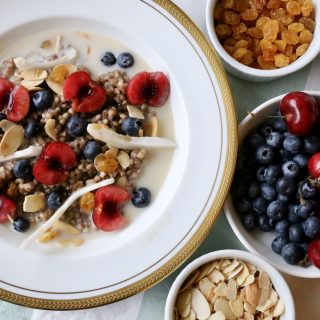