You can prepare our easy Sourdough French Toast at home in less than one hour with homemade sourdough bread or your favourite store bought loaf.

The origins of French Toast are not crystal clear. Long before the popular breakfast dish was called “french toast,” similar recipes were being whipped up all around the world. One of the earliest versions has been traced back to the Roman Empire.

The name French Toast was first used in 17th century England. The recipe and its name were later brought to America by early settlers.

In France, the dish is called Pain Perdu, which translates to “lost bread.” Originally, people made French toast from stale bread in order to make use of bread that would otherwise have been discarded. The dish is traditionally served as a dessert.

Around the world, people enjoy French Toast in many different ways. The British call french toast “eggy bread,” “gypsy bread” or “French-fried bread.” They even serve it with ketchup!

People in New Zealand prefer their French toast served with bananas, bacon and maple syrup. Australians serve up a savoury version of French toast with cheese and tomato sauce.

Our two favourite ways of preparing the popular breakfast and brunch dish is by making Baileys French Toast or this Sourdough French Toast recipe.

Sourdough bread is made by the fermentation of dough using naturally occurring lactobacilli and yeast. The lactic acid produced by the lactobacilli gives it a more sour taste and improved keeping qualities.

Sourdough was one of the trendiest hobbies for home bakers during the early days of the Covid-19 pandemic. Sourdough discard recipes became very popular as they require over 24 hours worth of your time and attention (feeding a sourdough starter, fermenting overnight, folding the hydrated dough, shaping loaves and baking). Also, since commercial yeast sold out for months it was the only way to bake bread at home.

We love using thick sourdough slices when making French Toast because the exterior is crunchy and the interior is soft and pillowy. You can use freshly baked sourdough bread that has cooled to room temperature. Better yet, one or two day stale sourdough bread offers the best results as the dehydrated slices soak up more of the egg mixture.

One of my fondest memories growing up as a kid was waking up in the morning at our family cottage in Muskoka and smelling French Toast sizzling in the kitchen.

My father’s favourite brunch dish is French Toast, which he traditionally prepared for breakfast on our birthdays. He’d whisk a few eggs together with milk, cinnamon and nutmeg and then dredge thick sliced of Italian loaf. He’d fry each side of the egg-soaked bread in butter and then top with sliced berries and maple syrup.

After taking a trip to Ireland, dad was inspired to make a more decadent Baileys French Toast recipe. He swapped out the milk for Baileys Irish Cream, which is made of Irish whiskey flavoured with cream and cocoa.

During the pandemic I was baking homemade sourdough bread every other week. We always used the stale leftover bread slices to prepare dishes like Sourdough French Toast, Croque Madame, Bread Pudding and German Bread Dumplings.

How To Make Sourdough French Toast

The perfect French Toast must be crunchy and golden brown on the outside while at the same time featuring a moist and light interior. Be sure to soak your bread in the egg mixture for long enough so each slice absorbs as much liquid as possible. This will ensure the interior of your toast is moist rather than dry.

If you’re serving brunch for a large group we suggest preheating your oven to 200F. You can keep your French Toast warm on a baking sheet until you’re ready to serve everyone at the table.

We like to serve French Toast with a fresh fruit salad, crispy bacon, sizzling sausages and scrambled eggs.

Whether you’re a seasoned baking expert or it’s your first time in the kitchen, be sure to tend to your griddle or stove to ensure your French Toast doesn’t burn.

You can ensure your Sourdough French Toast has a golden brown exterior by liberally coating your pan or griddle with fresh butter. We prefer to use butter as it browns nicely and adds a creamy flavour. If you’re all out of butter you can also use a neutral fat for frying such as canola oil.

We do not suggest preparing this recipe for vegans as it is made with cream, eggs and butter.

So what thickness of bread should you use for Sourdough French Toast? If you have any stale homemade bread, ensure you’re slicing each loaf into slices that are at least half an inch thick.

If your sourdough bread is a large circular loaf you can serve long and slender slices or cut them in half and stack them on the plate for maximum eye appeal.

We like serving Sourdough French Toast drizzled with maple syrup with sliced bananas and fresh strawberries. You could substitute maple syrup for pancake syrup, ginger syrup, caramel or chocolate sauce.

You can also get creative with the fruit toppings based on what’s available in season. During the spring and summer we like to use fresh berries, peaches and cherries. In the fall and winter it’s nice to top French Toast with sauteed apple and pear slices.

Before making Sourdough French Toast you’ll need to ensure you have the correct equipment in your kitchen. We’ve linked the supplies below on Amazon to make your online shopping experience easy. 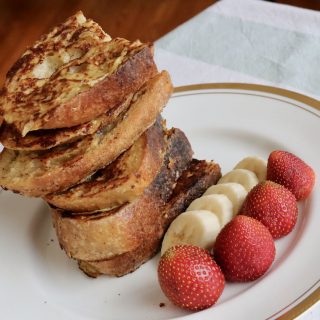